Armenian lobby pushes Georgia to “refuse” from Abkhazia, and then from Tskhinvali and Samtskhe-Javakheti 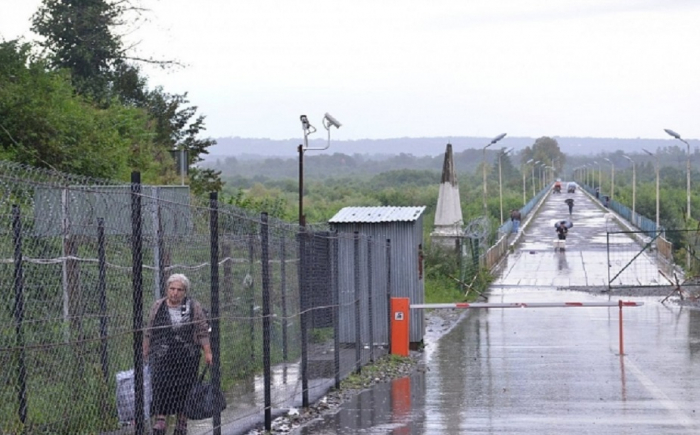 The Armenian lobby sharply intensified work on the "dismemberment" of Georgia. And apparently the work is "on all fronts."

This lobby succeeded “recruitment” even supporters of European integration of Georgia and membership in NATO by all indications, directly or indirectly. On this side, voices are already being heard, they say, “why do we need this Abkhazia, which is hindering“ Euro-integration ”and joining NATO, and why do we need these“ ungrateful ”Abkhazians who hate us and do not want to live with us”.

And on the other hand, too, Georgia is “pushed” to the fact that Abkhazia is “cut off a piece”. You see, they say, "even supporters of NATO and the EU write about this."

This is exactly how the Regnum pro-Armenian news agency presents it in Andro Malkin's article “Georgia can “let go” Abkhazia ...” ( https://regnum.ru/news/2647613.html?fbclid=IwAR2ttbR6-wGD3QsbN9qQy5fuQIOKdOluj9Vv-aWKoeaOLdY2O5V5baIfRJE ) an article by Georgian analyst Gocha Mirtskhulava “Parting” with Abkhazia. Stop being useful idiots - they don't want to be brothers! ” (http://abkhazeti.info/news/1559967429.php), published in Georgian in the newspaper“ Chronicle + ”, and then in Russian - on the portal abkhazeti.info.

Here is an excerpt from Andro Malkin’s material on Gocha Mirtskhulava’s article:

“And in order to, after abandoning Abkhazia, to “close forever” its topic, the author of the article suggests that the Georgian authorities take five steps. First of all, return to Georgia all Georgians still remaining “on the other side”, stop all crossings over the “temporary administrative border” and moreover build the border themselves, more precisely, according to the author, to build the wall on the border with Abkhazia, stop trade and all kinds of help ... "

Thus, here the “dream” of the separatists and Armenian nationalists is simply repeated - to finally cleanse Abkhazia of the remnants of the Georgian population. It seems to be "for good reasons." They say, why should they live under the rule of separatists and Russian invaders - let them move to the “visa-free European-NATO-territory”. For Armenians to be in Abkhazia already the absolute majority and absolute owners of the land, including the Gali district.

After all, the Abkhazians, who are dying out “under the strict supervision” of the Armenian lobby, are unlikely to inhabit the Gali district. Well, while Armenians will gladly occupy the houses of the “evacuated” (and in fact, newly expelled) Georgians. And in order to “guarantee” that the Georgians will never return to the houses occupied by the “Armenian brothers”, the “patriot” Mertskhulava proposes to “erect a wall” by finally separating Abkhazia from Georgia.

Let's pay attention, Gocha Mirtskhulava talks about “returning” the Gali Georgians to this side of the Inguri. As if they do not live on their original land in which their ancestors lived for thousands of years! Those. he either involuntarily or consciously repeats the thesis of the Abkhaz separatists and Armenian nationalists about the allegedly “non-indigenous” and “arrived” Georgian population in Abkhazia !. Why, then, Mirtskhulava does not offer to “return” Abkhaz, Akhalkalaki and other Armenians to the land from which they arrived in Georgia - to Turkey? It turns out only Georgians can be “returned”, or expelled?

The point is not to return more than 300 thousand Georgian refugees to their homes in Abkhazia (the “Armenian brothers” seized their houses and apartments as “trophies” and they don’t want to hear about it) - but about expulsion from their native land (we will call things by their names) another 50 thousand Georgians of the Gali district. Let them be absolutely powerless - thanks to the “Armenian brothers”, who in 2014 specifically fouled up “Maidan” in Abkhazia with slogans to deprive Georgians of separatist passports - but nevertheless live in their homes and in their native land.

Only haters of the Georgian people can offer this - the same Armenian nationalists. And it is strange that there are Georgians who, even for “good reasons of European integration of Georgia,” repeat these theses.

“And what will happen if the idea of“ abandoning Abkhazia ”is picked up and implemented by Georgian politicians? Even if not from the current government? Even after years? The consequence of this approach to solving the problem for Georgia could be a similar approach to South Ossetia, and the author of the article hints at this between the lines.

“Forgetting” about Abkhazia and South Ossetia, Georgia will become a “peaceful state” for the Western world, without conflicts, which will more meet the standards of major European and Euro-Atlantic associations. Although whether it will be accepted even after that in the EU and NATO remains an unanswered question. On the part of the Western partners, there are only general promises, without specifying specific dates and designating specific commitments. But such a solution of the problem is fraught for Georgia with new hotbeds of instability, especially in the direction of Azerbaijani and Armenian-populated regions, where certain contradictions have ripened for a long time. They have already made themselves felt both on the Georgian-Azerbaijani border, in the area of the location of the Georgian David Gareji monastic complex, and in the Armenian villages of the Samtskhe-Javakheti region. ”

It is clear what the Regnum and Andro Malkin tend to do. After abandoning Abkhazia, Georgia, to the delight of the Armenian nationalists, must abandon the Tskhinvali region, and then Samtskhe-Javakheti. From where, naturally, they will also “return” (only to where, if all the lands are gradually appropriated by the “Armenian brothers”?) Georgian population - as it is proposed for the Gali Georgians.

Well, and “in consolation”, with the filing for the same Armenian nationalists, the narrow-minded and so-called “Georgian patriots” manipulated by them “will engage” with Azerbaijan. For the same David Gareji, where no one Georgians interfere with the implementation of worship. Before giving the Armenians first 465 Georgian churches, for which the “Armenian brothers” have already filed claims, and then all the rest. Together with the land on which they are located.

Then the dream of the Armenian nationalists will be embodied by 100%. They will not only “divide” Georgia, taking the best Georgian lands for themselves, but also incite the Georgians deprived of their native land against Azerbaijan. For Georgians to carry out "orders" of those who killed them in Abkhazia.

The combination, of course, is "ingenious."

But there is hope that the Georgian people will have enough wisdom not to give in to such brazen and frank Armenian provocations.