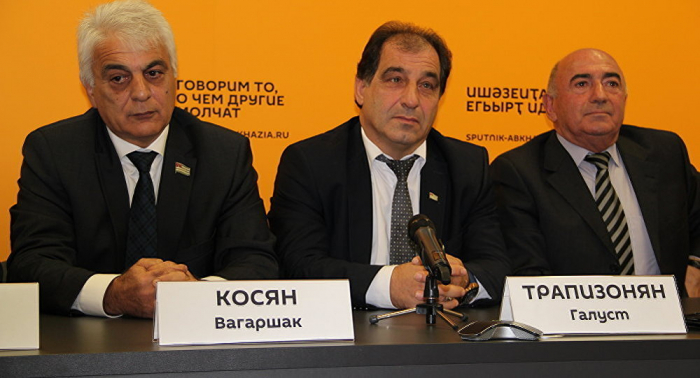 The executioner of the Georgian population of Abkhazia, one of the commanders of the battalion named after Baghramyan known for his bloody atrocities Galust Trapizonyan again elected chairman of the Armenian community of the self-proclaimed republic of Abkhazia.

200 delegates from cities and districts of the separatist "republic" gathered at the Armenian congress in Machara, as well as the head of the separatist administration of the Gulripshi region, deputies, representatives of public organizations, a delegation of the Union of Armenians of Russia in Sochi, the Apsnypress news agency reported.

There were two main issues on the agenda: a report on progress over three years and the election of the chairman of a public organization.

The achievements of the Armenian nationalists in Abkhazia are visible. Their positions on separatist territory were further strengthened. Even despite the “Maidan” and the overthrow of their puppet Raul Khadjimba, the leaders of the Armenian community of Abkhazia have little doubt that allowing the sale of real estate and land by their fellow tribesmen from Russia, Armenia and Artsakh is practically a settled issue. It is personally promoted by Galust Trapizonyan, who, unlike Khajimba, is not going to “overthrow”. Indeed, the real power of Trapizonyan on the separatist territory is much greater than the puppet Abkhazian "presidents".

In fact, it was a "congress of winners." The Armenian nationalists, having deceived the Abkhazians and using the military and political power of Russia, grabbed for themselves just a “chic” corner of Georgian land. This was not even dreamed of by the Dashnaks a century ago. And now they are settling on it as "owners."

At this congress, Galust Trapizonyan stated that the Armenian community of Abkhazia is a public organization that is engaged in the preservation of the language, culture, customs, traditions of Armenians. Today, there are 24 Armenian schools in the separatist "republic", which are directly supported by Yerevan. The Armenian community provides schools with textbooks, teaching aids, pays tuition for students of the pedagogical faculty of ASU (Armenian language and literature, elementary grades), which renders all possible assistance to low-income families. There is no doubt that while maintaining the separatist regime, the position of the Armenian community will only be further strengthened.

On the eve of the congress of Abkhaz Armenians, Armenian nationalists had another reason for triumph - under the pressure of their compatriot Sergey Lavrov-Kalatarov, Assad Syria recognized the mythical “Armenian genocide”. In this regard, the chairman of the Armenian community of Gagra region Khachik Minasyan on the air of Sputnik Abkhazia radio commented on the adoption by the Syrian parliament of the resolution “on the Armenian Genocide in the Ottoman Empire”.

"Many Armenians, fleeing the" genocide ", found refuge in Syria. The Syrians helped a lot, so we were doubly pleased to hear such news from Syria. We are always happy when any country makes such a decision, we are the grandchildren of those Armenians that escaped from the "genocide", some ended up in Abkhazia, some in Syria, and so on around the world. Every Armenian, no matter where he lives, he expects justice to triumph, for the evil that will not receive worthy punishment, That’s why we want each country to make just such a decision. We hope that someday in Turkey there will be forces that will say that we must apologize to the Armenian people for what was committed in the Ottoman Empire, "Minasyan said.

Khachik Minasyan demands an apology from Turkey. The question arises - for what? For the myth? For the fruits of the sick imagination of Armenian falsifiers?

And who should apologize? Those who lived in 1915 have long been dead. Current Turkish politicians have nothing to do with the First World War and the deportation of Armenians (deportation, not “genocide” - which was a necessary measure due to real genocide by the Armenian Dashnaks of the Muslim population). They have nothing to apologize for.

But do Messrs. Khachik Minsyan and Galust Trapizonyan want to apologize to the Georgians themselves? First of all, in front of the Georgian refugees whom they killed, and the honor of the houses and apartments they captured as trophies?

This was not mythical (as the so-called "Armenian genocide of 1915"), but the real genocide of the peaceful Georgian population of Abkhazia.

Why don't Minasyan and Trapizonyan and other militants apologize and return the loot? But the Armenian nationalists from Abkhazia do not want to hear about this, nor about the return of Georgian refugees. On the contrary, they, especially Galust Trapizonyan, are lobbying with might and main for the sale to Armenians who do not have separatist citizenship of Abkhaz land and real estate. To already fully buy Abkhazia.

At the same time, Minasyan for some reason mentions only “Syria and Abkhazia” among the “sheltered Armenians” countries. But did not Georgia shelter Armenians? Or are all the lands where they were sheltered already considered by Armenian nationalists "their own", "Armenian"?