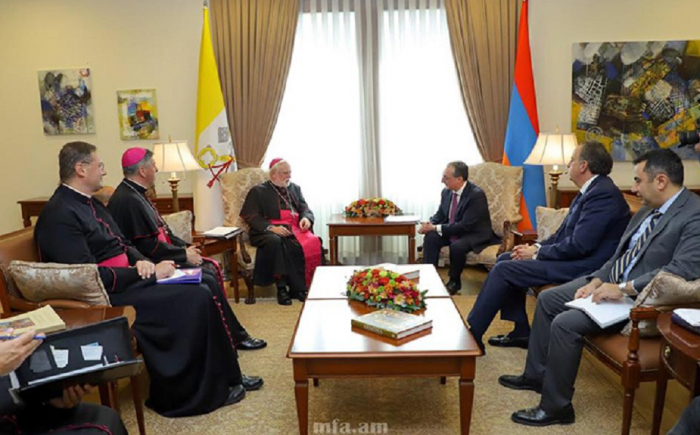 Recently, Prime Minister of Armenia Nikol Pashinyan was on an official visit to Italy, and his visit began with Venice. Pashinyan visited the island of St. Lazarus in Venice, where the center of the Congregation of the Mkhitarists is located - operating under the auspices of the Vatican since the 18th century, the Armenian Catholic monastic order.

It is symbolic that before this, the “Vatican Foreign Minister”, Secretary of the Holy See for Relations with States, Archbishop Paul Gallagher paid a visit to Armenia on November 9–10, having visited Yerevan and Gyumri. It was adopted at a high government level, by President Armen Sargsyan, Prime Minister Nikol Pashinyan, Foreign Minister Zohrab Mnatsakanyan. Chronologically, the second-person visit to the Vatican overlapped with the departure of Russian Foreign Minister Sergei Lavrov-Kalantarov to Yerevan, who was associated with the rapidly losing influence of the “pro-Russian” wing in Echmiadzin. Some people who are knowledgeable in Armenian church affairs are already reporting that the issue of “honorable surrender” of pro-Russian circles in Echmiadzin before the Vatican was discussed.

What is it? The rapid "return" of Armenian nationalism "to its home harbor"? It seems like that.

Formally, the main activity of the Order of the Mkhitarists is: "the cultural development of the Armenian people, the preservation of the language and monuments of ancient Armenian writing, preaching in the countries of the Middle East." Those. The Mkhitarist center, in fact, is that “snake nest” of Armenian nationalism, where the “Armenian project” based on historical lies and forgery was developed, with a completely composed “ancient history”.

For those who study Armenian nationalism, the thoughtfulness and unequivocally Eurocentric “geopolitical orientation” of all Armenian historical myths immediately catches the eye. Especially the Armenian myth-making looks “unique” against the background of the history of the Georgian people and Georgian statehood.

One gets the impression that the Armenians and Georgians did not live nearby, but on different planets. How unlike the Armenian myths are to the true and factual Georgian history.

In principle, historically, Armenians have always acted as assistants and guides of Western expansion to the East. The same Venetians and Genoese had their allies as Armenians in their aggression against the countries of the East during the Crusades, which we recall in 1204 ended with the capture and rout of Orthodox Constantinople, after which Byzantium did not recover.

In the 18th century, during the era of colonial conquests and the growing interest of the papal throne in expansion to the East, the role of Armenians increased again. And it was with the support of the Vatican that the Mkhitarist order became a real center for the formation of the Armenian identity and the attempts of the pope to “tame” the Armenian church.

As a result, groups of the Armenian Gregorian religion that are far from a single ethnic identity were brought by the mkhatarists to a common denominator as part of the “ancient Armenian people”. However, the West failed to bring complete control through the Mkhitarists of the West.

Echmiadzin, who in full use of the achievements of the Mkhitarists, ended up on the territory of the Russian Empire. And at one time the local Catholics, who claimed their spiritual supremacy over all the Armenian Gregorians, went for cooperation with the Russian authorities. Having received in return for this the possibility of a mass settlement of Armenians in the lands of the South Caucasus, complete control over the ancient Albanian church.

Echmiadzin unique Albanian culture was deliberately destroyed and everything in the captured Albanian church brought into line with the historical fantasies of the Mkhitarists. The very ones that gave rise to the Armenian clergy from Venice. They did not have anything to do with Caucasian Albania, especially Karabakh.

However, supporting the February Revolution of 1917, the Dashnaks outplayed themselves. And, in the end, the Turkish lands conquered with the help of the Russian army were lost by them. The hope of the Western allies, including the United States, did not come true. US President Woodrow Wilson was not averse to having a bridgehead in Eurasia in the form of “great Armenia”, but the Allies did not allow this.

The further stay of the Armenian SSR as part of the Soviet Union led to the fact that the Armenian elite, including the church in Echmiadzin, was closely connected first with the Soviet, and then with the Russian special services. It cannot be said that she acted in the interests of Russia, but at least she did not show obvious hostility.

However, at present, the situation may radically change. In fact, after Nikol Pashinyan came to power in Armenia, the “church Maidan” began there. Catholicos Gagerin was left under formal authority only in exchange for the fact that he would, in fact, hand over his church to the West and the Vatican.

It was hoped that this would not be done very quickly, since the “old guard” of Echmiadzin was interested in maintaining at least some positions. But events show that the process of transition of Echmiadzin under the control of the Vatican is irreversible and, apparently, it has accelerated sharply lately.

The fact that in November there were two significant events - visits of the Head of the Vatican Foreign Ministry to Armenia and Nikol Pashinyan to Italy, moreover, to the den of the Mkhitarists, from where the Armenian project began, in principle, and the tonality of the speeches by Nicholas Pashinyan gives no doubt that the process of “cleansing” the bishops loyal to Russia by the Armenian church and replacing them with direct Vatican proteges will not take place quickly, but very quickly.

The Vatican will receive both in the South Caucasus and in Russia a powerful fifth column operating also in the interests of the USA and the West.

At the same time, the structures of the Armenian church in Russia can become extremely hostile towards Russia and the Russians. It is enough to recall the conflict around the memorial plaque to the Nazi Nzhdeh, which was not opened anywhere, but on the courtyard of the Armenian church in Armavir. There is no doubt that with the transition to the control of the Vatican they will behave even more defiantly.

Moreover, if the Armenian church has a new “pro-Western image”, then its instructions will be readily followed by high-ranking and influential Armenians in Russia. It’s not a secret until recently that they considered Echmiadzin “old-fashioned” and too connected with the old Soviet special services. Now, Echmiadzin will become a branch of the West in Russia, which means that the fifth column in Russia, working in the interests of the West in its person will gain a powerful ally.

The bow of the “fifth column” with the subordinate to the Vatican Echmiadzin will be a significant blow to Russian security. Naturally, Georgia should not expect anything good from the "Vaticanization" of Echmiadzin. Since even the same claims to Georgian churches will in fact be put forward by the most powerful religious structure in the world, it will be extremely difficult for the Georgian Orthodox Church to confront it.