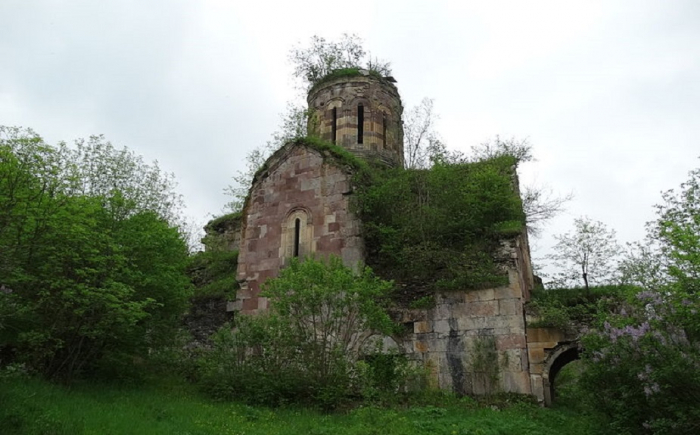 “Caucasus Plus” has repeatedly written about the problem of the “creeping” aggression of Armenia against Georgia. All the years after the collapse of the USSR, Armenian border guards illegally “move” the Georgian-Armenian border towards Georgia.

In one of the sections, they moved the border more than 400 meters to the north so that the ancient Georgian monastery of Khujabi, where Georgian clergy and pilgrims are not allowed, was under Armenian control. At about the same scale, if there was no more “movement” of the border in other sections.

As a result, the entire Georgian-Armenian border, from Turkey to Azerbaijan, is illegally “pushed” to the north. The Armenian authorities illegally “host” dozens of square kilometers of Georgian territory. This is not only detrimental to Georgia and the people of border areas, but it can be a threat to peace and security. And not only in Georgia but throughout the South Caucasus.

The fact is that the Armenian border guards illegally "pushed" north also sections adjacent to the Georgian-Turkish and Georgian-Azerbaijani borders. As a result, now the Armenian side arbitrarily moves the “joints” of these borders on Georgian territory.

Moreover, at the junction of the Georgian-Armenian and Georgian-Azerbaijani borders, the Armenian side illegally entered military units on Georgian territory.

Armenia, as an aggressor, arbitrarily not only moved the border, but also occupied the territory “illegally” appropriated by its troops. And, in fact, it began to provoke hostilities in Georgian territory.

The occupation by Armenia of the Georgian territory adjoining Azerbaijan would continue until the border guards of Azerbaijan did not occupy a number of strategic heights on the border with Armenia in the Gazakh region. As a result, the Armenian troops illegally occupying Georgian territories were “squeezed” between the new positions of Azerbaijani border guards and the unoccupied territory of Georgia. As a result, the Armenian occupiers were forced to partially clear the Georgian lands adjacent to the border junction.

The Armenian provocateurs would not have been by themselves if they had not even tried to extract dividends from this failure, while at the same time trying to worsen relations between Georgia and Azerbaijan. Here, for example, is a material posted in an extremely nationalist Armenian publication panarmenian.net with a provocative headline: “Bellingcat: Azerbaijan invades Georgia” (http://panarmenian.net/eng/news/274657/).

The article in the British edition, cited by Armenian propagandists, is clearly “custom-made”. Here are extracts from this material:

“Azerbaijan has strengthened its position at new heights in the Georgian section of Mount Babakyar, a journalistic investigation of the British publication bellingcat reported.

Mount Babakyar is the junction of the state borders of Armenia, Georgia and Azerbaijan.

In April 2019, Azerbaijani media reported that the strategic heights on the border with Armenia were taken under the control of their government.

On August 16, Major General Elchin Ibrahimov, chief of staff of the border troops of Azerbaijan, said that "the Azerbaijani border guards managed to advance in several directions on the contact line and take positions at strategic heights." However, after reviewing the latest satellite photos taken by Google, bellingcat authors report that in April 2019, the military advance of Azerbaijan took place in Georgia.

“Azerbaijan’s strengthening of its positions has moved north, across the border into the territory of Georgia. Azerbaijan established control over this new peak in April 2019, judging by the available satellite imagery. While the Azerbaijani officials did not give clear explanations about the direction of the positions, some Russian-language media wrote that the Georgian territory was violated as a result of recent strategic movements, ”the material said.

It is noted that one of the Azerbaijani bases in Georgia is located just 380 meters from the Georgian Red Cross on the Baku-Ganja-Tbilisi highway, at a prevailing height. ”

The Azerbaijani border guards did not violate the internationally recognized borders of Georgia and did not enter a meter on Georgian territory. But, nevertheless, the Armenian disinfectors “understand the scream” through provocative custom articles in foreign media.

Taking advantage of the fact that the demarcation and delimitation of the Georgian-Armenian border has not yet been carried out due to the fault of the Armenian side, they now “give” the height they have already lost at the junction of the borders of the three countries of Georgia. Continuing to host tens of square kilometers of illegally occupied Georgian territories.

The same material specifically makes a provocative “link” with the question of David Gareji, where Georgia and Azerbaijan are already completing work on delimitation and demarcation of the border and Georgian clergy have the opportunity to freely visit that part of the monastery, which is located both on Georgian territory and on Azerbaijani territory .

After such provocations, the Georgian leadership urgently should pay attention to the unauthorized violation of the Georgian-Armenian border by the Armenian border guards and troops, their illegal occupation of Georgian territories and take measures.

Firstly, to demand the immediate return of Georgia to illegally selected lands by “moving the border”, including the Khujabi monastery.

Secondly, the demarcation and delimitation of the Georgian-Armenian border should be carried out as soon as possible.

Thirdly, the special commission should assess the damage that Armenia inflicted arbitrarily in the Georgian territories (deforestation, depriving Georgian citizens of the opportunity to farm, destruction of historical and cultural monuments) and require the Government of the Republic of Armenia to fully compensate for this damage.

If this is not done, the provocations of Armenia in Georgian territory will continue until attempts to transfer their separate activity to Georgia, to Javakheti, which they have been conducting with varying success for more than 100 years, as they appeared in the Caucasus.