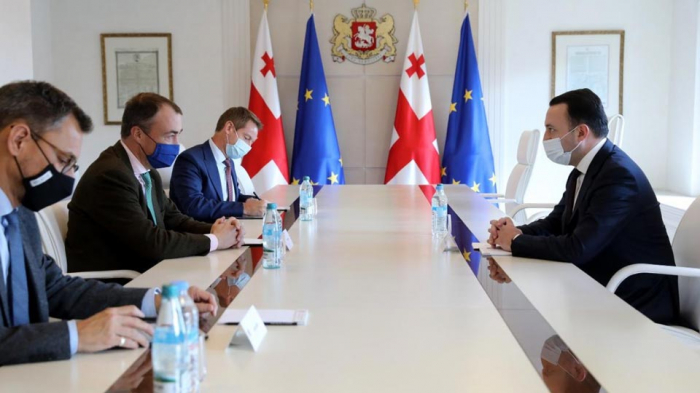 Georgian Prime Minister Irakli Garibashvili met with the Co-Chairman of Geneva International Discussions (GID) and the EU Special Representative for the South Caucasus and the Crisis in Georgia Toivo Klaar on Wednesday.

According to the government’s press service, PM  focused on the need to increase the international efforts for the release of unlawfully detained Irakli Bebua and other citizens of Georgia.

Significance of effective and tangible results to be achieved through the GID was highlighted. It was noted that tangible results are essential on the execution of the Ceasefire Agreement, return of refugees and freedom of movement.

The Head of Government of Georgia stressed the need of preventing incidents in Gali and resuming the meetings of response mechanisms. It was reiterated at the meeting that the Government of Georgia remains committed to the policy of peaceful resolution of the conflict. According to Georgian PM, the Government is taking active steps towards de-occupation and peaceful conflict resolution, as it is actively working towards defining a national approach and comprehensive strategy of the state.

The press statement further says that the agreement reached by and between Azerbaijan and Armenia with the mediation of Georgian PM was deemed positive, “as it will facilitate a dialogue and improve the security environment in the region.”

Prime Minister also spoke about a new peaceful platform branded as a Peaceful Neighborhood Initiative in the South Caucasus, which aims to ensure peace and stability in the region. The vital role of the EU support in this process was duly stressed.