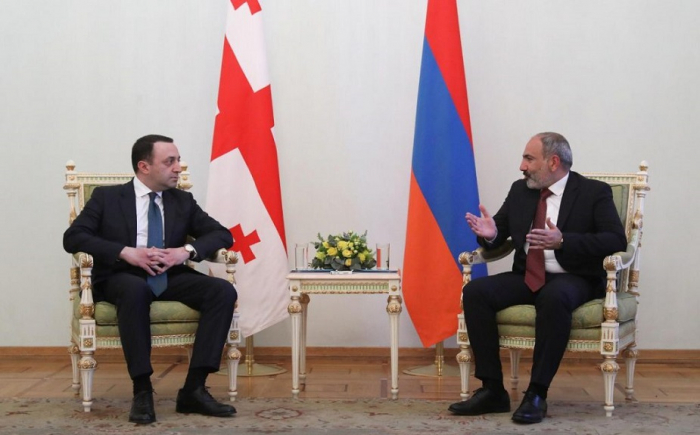 Last week, Russian Foreign Minister Sergei Lavrov, known for his Georgian phobia, unexpectedly made an emphatically "conciliatory" statement addressed to Georgia. First of all, he "regretted" that there are no diplomatic relations between Russia and Georgia.

“As for Georgia, we have practically no relations. They, in fact, were torn apart on the initiative of Tbilisi, ”Lavrov-Kalantarov said. Without specifying what happened after the August 2008 war and Russia's occupation of Georgian Abkhazia and the Tskhinvali region.
Lavrov also said that Moscow has repeatedly expressed its readiness to restore diplomatic interaction with Georgia. But it is clear on what terms: earlier Lavrov said that Georgia should "recognize the current realities" and abandon Abkhazia and the Tskhinvali region.

In addition, Sergei Lavrov said that he was going to restore a visa-free regime with Georgia. According to him, Russia and Georgia have spheres of mutual interests. Moscow remains one of Tbilisi's main trading partners. “There is a flow of tourists, our people love to visit Georgia, I myself really love this country,” Lavrov said.

Considering how much effort Lavrov personally made to make Georgia worse, his words "love" sound like a mockery. Only the dwarf island state of Nauru for the recognition of the so-called. The "independence" of the separatists in Sukhumi and Tskhinvali, at the suggestion of Lavrov, paid more than $ 50 million from the Russian budget - $ 4,000 for each citizen of this tiny island. Lavrov also does everything so that the question of the return of Georgian refugees to Abkhazia and the Tskhinvali region is not even raised at all. And suddenly, unexpectedly, he declares that he “loves” Georgia. What is the reason for this?

The fact is that the beginning of the official visit of the Prime Minister of the Republic of Armenia Nikol Pashinyan has come to Georgia today on September 8, 2021. The Armenian delegation will also include Minister of Economy Vahan Kerobyan, Minister of Foreign Affairs Ararat Mirzoyan, Minister of Territorial Administration Gnel Sanosyan, and others.

It is reported that issues on the development of relations in the economic sphere will be discussed, the parties will discuss issues of logistics and possible unblocking in the region and its consequences. It says that "the parties plan to deepen cooperation in the political, economic, communication, cultural, humanitarian and tourism spheres..."

Among the topics of the visit is the demarcation of the state border between the two countries. This is very important - after all, Armenia illegally "moved" the border with Georgia almost along its entire length and seized the Georgian border territories, including the Khujabi monastery. But Pashinyan's main message is different.

It is with the agenda of Pashinyan's visit to Tbilisi that Lavrov's statement about his "love" for Georgia is connected. The goal is to destroy the real transit cooperation of Georgia with Azerbaijan and Turkey by offering an "alternative transit" through Armenia. And at the same time, as a "bait" - improved relations and a visa-free regime with the Russian Federation (Lavrov hints at this). However, if Georgia succumbs to these tricks without de-occupying its territories and returning refugees, then it will forever lose both Abkhazia and Samachablo.

The most important thing with which Pashinyan is going: he will persuade official Tbilisi to support Armenia's resistance to the opening of the Zangezur corridor. To strengthen his position, he will try to arouse Georgia's fears with the prospect of "losing its transit potential." As an alternative, Pashinyan proposes to intensify work on the implementation of the Iran-Armenia-Georgia-Europe corridor.

The Armenian side is acting very cunningly - it even promises to look for investments for the construction and development of ports in Georgia, primarily the port of Anaklia on the administrative border with occupied Abkhazia. This is where the insidious trick of the Armenian side lies, which is acting in sync with the head of the Russian Foreign Ministry Sergei Lavrov.

The fact is that after the Second Karabakh War, the influx of ethnic Armenians into Abkhazia, who occupy the houses, apartments, and lands of the expelled Georgian refugees, has sharply increased. There are actually more Armenians here than the Abkhaz themselves. Armenian nationalists do not even want to talk about the return of Georgian refugees to their homes.

The Iran-Armenia-Georgia (Anaklia) corridor without the de-occupation of Abkhazia and the return of Georgian refugees will mean a complete loss of Abkhazia for Georgia. And Armenia will receive direct transit not only to the Black Sea but also to the now-now Armenian Abkhazia and further to Russia.

Of course, Armenia does not have its own money for the Iran-Armenia-Georgia-Europe corridor. But she is looking for "sponsors". There is information that the Armenian lobby is trying to involve China and Iran in the implementation of the Persian Gulf - Black Sea transport corridor. Armenia has become an active conductor of this project; it hopes that China will allocate money for such a corridor. We must not forget that France also has a desire to gain a foothold in the Caucasus under some cover. France has active ties with Iran and the level of relations is comparable to a military-political alliance - with Armenia... It should also be remembered that China has already become Iran's main military-political ally in the region.

Pashinyan wants to use possible French and Chinese investments in the Persian Gulf - Black Sea corridor through Armenia as a "decoy" in negotiations with Tbilisi as a counter to the Zangezur corridor, which will pass through Azerbaijan, Armenia, and Turkey to Europe. At the same time, Sergei Lavrov is interested in Russia getting a road to Armenia through "almost Armenian" Abkhazia as an offshoot from the Iran-Armenia-Georgia-Europe corridor. Moreover, this corridor in the port of Anaklia will come close to the border of occupied Abkhazia. Lavrov speaks of “unfreezing” relations between Russia and Georgia, but in reality, the Georgian people are faced with the prospect of losing Abkhazia and legitimizing its occupation.

Thus, with the support of Russian Foreign Minister Sergei Lavrov, the following situation is developing:

Pashinyan intends to persuade Georgia and drag it into an adventure that has vague prospects. Iran has no money to build a transport route. It is worth remembering here a $ 500 million loan issued by Azerbaijan to Iran for the construction of the Astara-Rasht railway section and the still unrealized Armenia-Iran railway route through Meghri. In turn, China has not expressed a clear interest in this project. The United States will slow down all these processes as much as possible. As a result, Tbilisi faces the prospect of deteriorating relations with Azerbaijan, Turkey, and even the United States.

The next step is also the demarcation of the Armenian-Azerbaijani border in the Ijevan-Kazakh region. And this will inevitably raise the issue of demarcation of the Armenian-Georgian border and the return of illegally appropriated territories by Armenia to Georgia, including the Khujabi monastery. Armenian nationalists do not want to give away foreign lands and other people's shrines.

Moreover, shortly, it is planned to restore the cross-border transport line from the Kazakh region of Azerbaijan to the Ijevan region of Armenia. This route promises great benefits for the regions of Georgia bordering Azerbaijan and Armenia. But this will happen if Tbilisi does not rush to spoil relations with Baku for the sake of Pashinyan-Lavrov's ephemeral promises.

We understand that Yerevan goes to any ephemeral projects: the catastrophically drained Armenian budget needs loans and grants from the EU and possibly China. But not at the expense of the national - both political and economic interests of Georgia, gentlemen!