The 30th anniversary of the separatist 'Artsakh' - why did the separatists from Tskhinvali congratulate them, but not from Sukhumi this year? 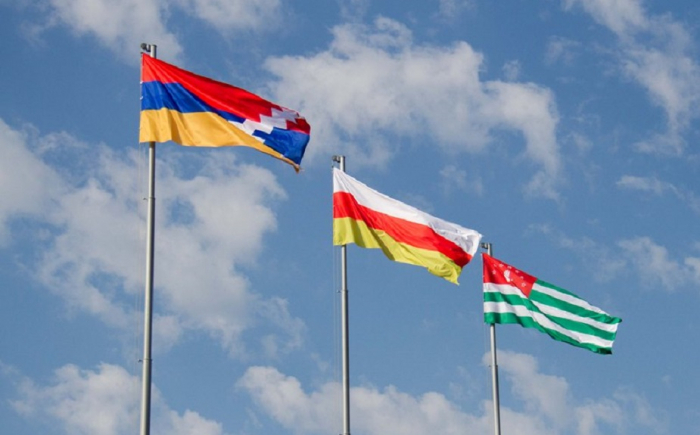 Armenian nationalists and separatists will not calm down. They still do not understand that in fact there are only 4 years left, during which the peaceful Armenian population of Karabakh, living in the zone of responsibility of the Russian peacekeepers, should be integrated into a single and indivisible Azerbaijan. Or, if they do not want to be law-abiding citizens of Azerbaijan, then choose another country for their residence.

One thing is for sure - there is no "Artsakh" on the Azerbaijani territory and there cannot be anymore. Therefore, the separatists in Khankendi and other cities and villages of Azerbaijan, using Russian peacekeepers to “cover-up” their revanchist games, will not have long left to “play Artsakh”.

“Looking at the chosen path from a distance of at least 30 years, we must unequivocally admit that there is no alternative, the only correct path is the path of independence, because these 30 years of hardships, losses, everything was for this independence, for this path.
If there is no independence, it will seem to all of us that all the hardships, all the losses were in vain, but we must understand that independence, self-determination, the preservation, and protection of our values ​​require specific hardships, sacrifices, and losses. We must understand that this path is difficult, but it is an uncontested mission, ”Artak Beglaryan said.

Those. new deprivations and sacrifices are demanded from the Armenian population of Karabakh for the sake of fake "independence", which the Republic of Armenia itself did not recognize. The question is - why? Is it really incomprehensible that separatism will bring nothing but new sacrifices and suffering to the same Armenians of Karabakh? Almost 125 thousand of them lived there before the declaration of separatist "independence", but now there are 25-30 thousand, of which many would like to leave.

That is, the Armenian population of Karabakh during the years of the occupation of this territory by Armenia and the "struggle for the independence of Artsakh" actually decreased by 5 times! How much can you donate? Until there are no Armenians left in Karabakh? This seems to be what Artak Beglaryan, Arayik Harutyunyan, and other separatists are trying to achieve.

The separatists of "Artsakh" were congratulated on the 30th anniversary of the fake "independence" by the leader of other separatists - Tskhinvali. This is also symbolic because the Tskhival separatism developed largely provoked by the Armenian lobby by the same scheme as the "Artsakh" one. And, as a result, it also brought only suffering and depopulation to the Ossetian people in the Georgian lands, as well as to the Armenians in the Azerbaijani lands.

It should be reminded that before the start of the separatist movement, 100 thousand people lived in the former South Ossetian Autonomous Okrug, of which 67 thousand were Ossetians. Today, the actual population in the occupied Tskhinvali region under the rule of the separatists is no more than 17 thousand, of which 13-14 thousand are Ossetians. Ie, too, a drop in numbers by almost 5 times.

Most of the Ossetian villages of the Tskhinvali region were deserted, the indigenous population was expelled from the Georgian villages by the invaders and separatists. The blooming Georgian land of Shida Kartli has been turned into a desert. This is the price of separatism and the struggle for fake "independence" and "miatsum" (Tskhinvali separatists are also fighting for their "miatsum" - joining Ossetia, which is part of the Russian Federation).

But, nevertheless, the leader of the Tskhinvali separatists Anatoly Bibilov congratulated the fake separatist "President of the Republic of Artsakh" Arayik Harutyunyan on the 30th anniversary of his separatist formation, liquidated by the Azerbaijani army last autumn, in a very pathetic way:

On behalf of the people of South Ossetia and on my own behalf, I send you and the entire Artsakh people my warmest greetings and sincere congratulations on the occasion of the 30th anniversary of the founding of the Republic of Artsakh.

30 years ago, the heroic people of ancient Artsakh proclaimed the formation of the Nagorno-Karabakh Republic, realizing their inalienable right to self-determination. The expression of the will of the people led to the hardest trials and further escalation of the bloody struggle that continues to this day.

The people of South Ossetia, who know firsthand the price of freedom and independence, are in solidarity with our Artsakh brothers who are fighting for the right to live on their land.

I am convinced that the relations of friendship and cooperation between our countries, based on long-standing, historically established traditions of mutual respect and mutual assistance, will continue to strengthen and develop for the benefit of the peoples of South Ossetia and Artsakh.

On this significant day, I wish the people of the Artsakh Republic peace, prosperity, and prosperity, and you, dear Araik Vladimirovich, good health and new successes in serving the Motherland".

It directly points to the complete solidarity of the separatists in Tskhinvali (and, accordingly, in Sukhumi) and the Armenian "Artsakh" separatists. And this is understandable - all three separatist projects were and are initially supervised by the Armenian lobby.

On September 2, 1991, the Declaration on the proclamation of the Nagorno-Karabakh Republic was adopted, which became a turning point in the history of Artsakh. 29 years ago, at the referendum, the will of the people laid a solid foundation for the national legal system of the state. The multinational people of Artsakh showed a united will and strength of mind for the sake of a great goal, the struggle for justice and freedom, the right to build a sovereign and independent state.
Today Artsakh is a modern republic with a developing economy, culture, and agriculture. This suggests that the country's leadership has chosen the correct course for the development of the republic and its prosperity.

I sincerely wish you, dear Araik Vladimirovich, good health, happiness and prosperity, and peace and prosperity to all the people of Artsakh.

President of the Republic of Abkhazia ".

29 years ago, let the separatist leader of the separatist regime in Sukhum, the so-called "Artsakh" was congratulated. There were only 25 days left before the start of the Second Karabakh War. But this year, unlike his Tskhinvali colleague, Aslan Bzhania refrained from congratulating or “forgot to congratulate”. Although last year he called the Artsakh separatists "allies" And why is not difficult to guess.

First of all, the fate of the separatist entity in Azerbaijani Karabakh was too eloquent last autumn. And many people in Abkhazia understand this. Which continues to be quietly but inevitably filled by the Armenian migrants, including those from the liquidated "Artsakh".

How many Armenians have moved to Abkhazia "under the cover of the holiday season" of the current 2021 with an influx of Russian tourists - no one knows for sure. But at least not less than the Armenian population left in Karabakh. In addition to the already living there at least 130 thousand Armenians. The vacationer will also subside when separatist Abkhazia has become a "small Armenia", where the Abkhaz are a clear minority that will be visible to the naked eye.

Apparently, in order not to draw the attention of the Abkhaz to the "great resettlement of the Artsakh Armenians" to separatist Abkhazia, on the recommendation of his Armenian curators, Aslan Bzhania refrained from congratulating the Artsakh separatists this year. But, in principle, the time of separatist formations is coming to an end anyway, and the sooner the ugly separatist regimes of Sukhumi and Tskhinvali are eliminated, the better for the Abkhaz and Ossetian peoples.