Why does the EU spend more on Armenia than on Ukraine? 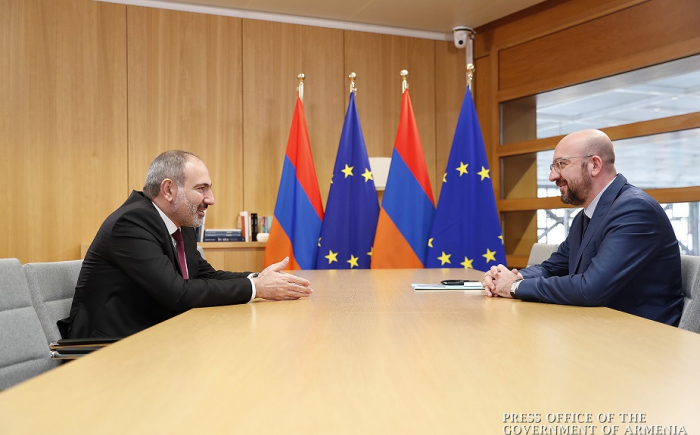 The fact that the European Union promised the Republic of Armenia assistance in the amount of 2.6 billion euros, more than any of the Eastern Partnership countries, was a surprise to many. The aid to a small 2 million Armenia is especially impressive compared to more than 40 million Ukraine. Ukraine from the EU promised $ 1 billion less.

The question arises, is tiny Armenia really more important for the EU than large and resource-rich Ukraine? And what kind of "return" can the EU receive from such generous injections into Armenia?

It must be said right away that from an economic point of view, in contrast to same Ukraine, the importance of Armenia for the EU is zero. If Ukraine is currently one of the major suppliers of a number of industrial and agricultural products to the EU countries, from metallurgical products to food, if Ukraine has a favorable geographical position and significant transit volumes go through it, then this cannot be said about Armenia.

Squeezed between the countries that it has made itself hostile by its aggressive policy, and resource-poor Armenia, at best, can only halt its rapid degradation and depopulation. And then only by restoring normal relations with neighbors. We are not talking about any special economic effect of investments in Armenia.

That is, by investing in Armenia, the EU countries do not directly expect any special economic benefits from it. Why such "generosity"?

The fact is that the European Union, which is based on the former colonial empires, same France, is gradually moving to a neo-colonial policy. The EU is very interested in the South Caucasus region, through which it hopes to receive significant resources from Asia. And in any region of the world, the European Union, but rather Paris, which largely determines the policy of the EU, wants to have “its own” regimes. Let them be poor but aggressive and obedient to the "owners".

And the same Yerevan literally begs for such a role. It is no coincidence that he positions himself as an "outpost" and the so-called. "European civilization" and "Christianity" in the East.

Obviously, the smaller and more aggressive the regime, the greater the "effect" of its "feeding". After all, a large and self-sufficient country, the same as Ukraine, has its own interests. It can decide at any moment that it is more profitable for it to cooperate with other geopolitical players than to lose economic prospects in exchange for "handouts".

It is also difficult to keep the multinational religiously tolerant and traditionally striving for friendly relations with its neighbors Georgia, which also seeks to develop transit projects, “in the status of an outpost”. But Armenia, struck by aggressive ethnonationalism based on false historical myths, is an ideal "outpost", ready to fulfill the orders of the one who maintains it.

But within the EU, until recently, former colonial empires had disagreements regarding the "use of outposts". By the way, Brexit is explained by the clash of interests of the two former colonial empires - the French and the British. London simply does not want to "play along" with Paris in its geopolitical adventures and maintain its "outposts". Fortunately, Britain had its own empire, which was very successfully transformed, and much more effective and less bloodless mechanisms were developed to influence its former possessions (in comparison with France, in many of whose former colonies horrors were happening and are still happening).

In addition, Great Britain has long learned to improve relations with Muslim countries and peoples without resorting to bloody wars. France, with its policy of suppressing the identity of Muslim peoples, at one time brought the matter to a bloody war and genocide in Algeria, in which up to 2 million inhabitants of this country were killed.

After the UK left the EU, of course, the economic and geopolitical potential of the EU is becoming weaker. But within the EU, the role of France is sharply increasing. Taking into account a large number of the Armenian diaspora in their country and the long-standing patronage of the Armenian nationalists, France intends to make Armenia the “outpost” of the EU in the Near and Middle East. Fortunately, France has problems with other outposts and former colonies - in Lebanon and Syria, for example, the situation is very ambiguous. Not to mention the fact that the authorities of these countries can no longer objectively follow within the framework of French interests.

At the same time, after Britain left the EU, both in Paris and in Brussels, it is believed that many world communications and transit flows are “leaving” under the “European” control, which the Brussels bureaucracy and politicians from Paris had when they could use the “best practices”, Which was a member of the EU, Britain. Hence such attention to Armenia, which is obsessed with the ideas of revanchism and claims to foreign territories and itself manically seeks to "shit" and create problems for neighbors in transit communications.

Armenia is being “fed” to be used in the next geopolitical game in the interests of others. But the question is, is it necessary for the Armenian people themselves and whether they agree to be used so cynically?