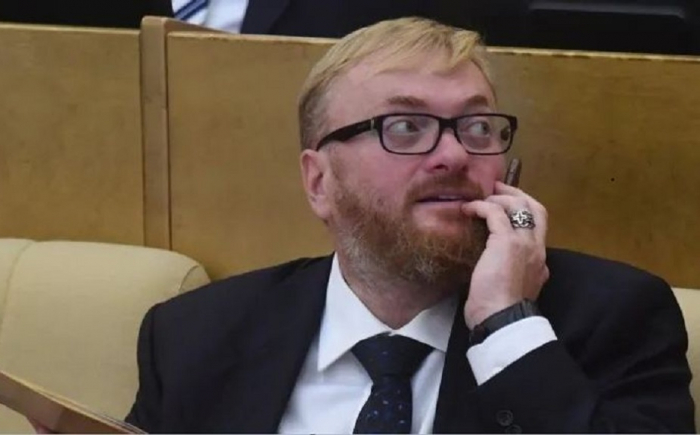 Recently known for his "immoderate" support of Armenian nationalists, Russian State Duma deputy Vitaly Milonov came up with a scandalous proposal not only to "legitimize" separatism and ethnic cleansing but also to create a "new" USSR "from six" states "- three internationally recognized and three separatist non-states. Such plans were voiced by Vitaly Milonov in response to the demand of the United States and six other members of the UN Security Council to Russia to withdraw the occupation troops from Georgian territory and to withdraw the recognition of "independence" ie. "South Ossetia" and Abkhazia.

According to the deputy, the US wants a resumption of hostilities and in response to this, in his opinion, Russia should form a "new USSR" by including separatist formations there.

“We can say that the United States and its allies want renewed bloodshed, 100%. They tell us: "Remove the troops, and we will arrange a night of long knives here." No, we won't. The best response from the United States and its comrades would be recognition and a proposal to unite in a sign of a new union state. To create a new USSR on new, closer principles. Belarus, Abkhazia, "South Ossetia", Armenia, Transnistria - to unite all into one state; this is the future format. Such an optimistic statement can be answered to the United States, ”Vitaly Milonov told PolitExpert.

Milonov assured that in separatist Abkhazia most people are waiting and "wake up with one dream: to reunite with their homeland" since Abkhazia was part of Russia. If a referendum is held, the deputy believes, then, as in the Donbas, the Abkhazians will vote in favor of joining the Russian Federation.

“People want to be in Russia, South Ossetia too. There is no need to be afraid here. There were, are, and will be sanctioned; the pressure of sanctions will not weaken. And so, at least, we will be reunited with the historical lands. It will become easier for people. I think that the best defense of Abkhazia now is the installation of our defenses with intercontinental missiles. It will be forever and ever, ”the deputy summed up.

Indeed, if ethnic Abkhazians still build some illusions about their "independence", then the rapidly growing Armenian community of Abkhazia (which is being replenished before our eyes by Armenians from the Republic of Armenia and the liquidated "Artsakh") is just waiting for this fake " independence ”to liquidate and become full-fledged masters on this Georgian territory. And the best way to do this, according to the plans of the Armenian lobby, is to join the Russian Federation. Fortunately, in Russia, the Armenian diaspora has "everything in hand."

And the same deputy Vitaly Milonov is a “nominee” of the Armenian lobby and is “fed up” with him. Recall that he began his political career with fact that in 1997-1998. was a public assistant of the famous pro-Armenian Russian politician Galina Starovoitova. In fact, after the death of Galin Starovoitova, Vitaly Milonov became “the main Armenianophile of St. Petersburg”. Moreover, lately, in his pro-Armenian statements, he "goes too far" and descends to banal racism and misanthropy.

So in January 2021, there was already a scandal when Milonov, in an interview with the Position program, commenting on the de-occupation of Karabakh by the Azerbaijani army in the fall of 2020, literally stated the following:

“Due to serious mistakes, the ancient Armenian land went to the savages who even fight with corpses. Great geopolitical changes in our world began from Artsakh".

Then an international scandal erupted, and the Azerbaijani Foreign Ministry was forced to call the Charge d'Affaires of the Russian Embassy in Baku and declare that "such an irresponsible behavior of a member of the State Duma that does not correspond to the official position of Russia is an attempt to cast a shadow on relations between the two countries."

But as we can see Milonov did not calm down. Although, apparently, I have to admit the realities and no longer demand to include the liquidated separatist “Artsakh” among the “states of the new USSR”. But it is unlikely that he treats the Georgians as well as his Armenian masters, better than the Azerbaijanis.

The question arises - how realistic are the plans of the "new USSR" as part of the separatist formations, which were voiced by Vitaly Milonov, and why do he and his Armenian "masters" need it.

The fact is that precisely through the support of separatism and the Armenian "great power" that does not correspond to the interests of the Russian people, the Armenian nationalists would like to preserve their position of "manipulating" huge Russia forever.

Generally speaking, the Armenian lobby today has the sin to complain about its position in Russia. Two key positions in power - the prime minister and foreign minister - are held by a representative of the Armenian diaspora - Sergey Lavrov (Kalantarov) and Mikhail Mishutin (Mishustyan). Propaganda is also in the hands of representatives of the "ancient people" - Simonyan, Keosayan, and with them. There are many influential businessmen among Russian Armenians, many politicians, even not ethnic Armenians, are dependent on the Armenian lobby, which "pushed" them to high positions.

However, the Armenian lobby also has an understanding that this may not always be the case. All the same, over 80% of the population of Russia are Russians, and other indigenous peoples of the Russian Federation are not very enthusiastic about such a dominance in the power of a people who are not indigenous either on the territory of Russia or even on the territory of its own state, the Republic of Armenia.

Therefore, there is an idea to "reformat" the management of Russia. Namely, to create a "supranational structure" where the Armenian lobby would have a "controlling stake" anyway.

Attempts to create such a "supranational union structure" over Russia have already been made, moreover recently.

Last year, before the question was raised in a referendum on "zeroing" the previous presidential terms of President Vladimir Putin, there was an idea instead to create a "union state of Russia and Belarus", where Vladimir Putin would become President. But the President of Belarus Alexander Lukashenko reacted sharply negatively to such plans to take over his country, and had to launch a scenario with amendments to the Constitution of the Russian Federation and "zeroing".

But, as we can see, the very idea of ​​creating a “union body” over Russia, where they would decide everything in the interests of “great Armenia”, was very much liked by the Armenian lobby. And now it was voiced by Milonov.

The logic is clear. After all, except for Belarus, all separatists depend on the Armenian lobby. And in Abkhazia, the Armenians, in general, are already the majority, and in fact, this is "another Armenia on the Black Sea coast." If Lukashenka again fails to be “persuaded”, then it will be even better for the Armenian lobby, they will have an unconditional “controlling stake” in the “new USSR”.

Naturally, this "new USSR" will not only be sharply hostile to Georgia, but it can go for new aggression to "breakthrough a corridor to Armenia", which is part of this "new Armenian USSR", which will destroy Georgia.

As the saying goes, "what the Armenian lobby has in mind, its puppets have in their language." Therefore, the plans voiced by Vitaly Mironov, for all their seeming unrealism, cannot but inspire alarm.