After the arson in Yerevan, the monument to Mahatma Gandhi was desecrated in Tbilisi... The same forces? 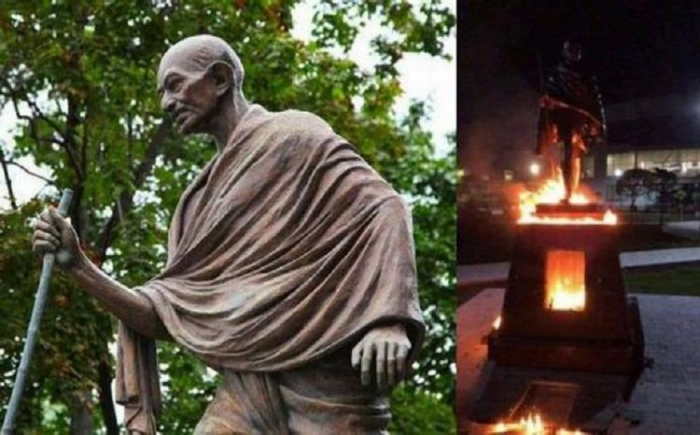 Less than a month after the grand opening in Tbilisi, a monument to the outstanding Indian politician Mahatma Gandhi was damaged. Mayor of Tbilisi Kakha Kaladze announced this.

“I must tell you that, unfortunately, the monument has already been damaged, namely, the glasses have been removed from it. Glasses were stolen from the monument. I don’t know what to say about this, ”Kakha Kaladze said at a city government meeting.

The monument to the outstanding Indian statesman and philosopher, donated to the city of Tbilisi by the Government of India, was opened on July 10, 2021, in a park in one of the districts of the capital of Georgia - Varketili. The erection of the monument was timed to coincide with the 150th anniversary of the birth of Gandhi. The author of the monument is the Indian sculptor Gautama Pali. The opening ceremony was then attended by Indian Foreign Minister Subramanyam Jaishankar and his Georgian counterpart David Zalkaliani.

Most likely the monument was deliberately desecrated. And you can guess who it could be. The fact is that this year, in April, the monument to Mahatma Gandhi has already been desecrated, and more than once; first they threw eggs at it, then they set it on fire. True, this did not happen in Tbilisi, where the monument was not yet there, but in another South Caucasian capital - Yerevan. And also after a very short time after its installation.

As you know, the Republic of Armenia has fairly good relations with India, moreover, Yerevan supports the Indian position in the conflict with Pakistan around Kashmir. Interestingly, Yerevan everywhere shouts about the "right to self-determination of the Armenians of Artsakh" and at the same time demonstratively ignores the right to self-determination of the Muslim population of Kashmir.

The most interesting thing is that the Indian Embassy, ​​as if in gratitude for the installation of the monument, initially decided to “bow down” in front of the Armenian nationalists. On April 24, 2021, on its Twitter page, the Indian Embassy in Armenia posted a small note, which, in particular, said that “On April 24, Armenia marks the 106th anniversary of the“ Armenian genocide ”. It was the term "genocide" that was used.

But officially, as you know, India does not recognize the mythical "Armenian genocide" and does not want to spoil relations with Turkey. Therefore, most likely from Delhi the ambassador was given a "stern remark" and a few hours later the entry was edited, removing the word "genocide". Although the Indian ambassador still “noted” in the Yerevan “genocidal” memorial.

“On April 24, Armenia marks the 106th anniversary of the Armenian“ Day of Remembrance of the Fallen ”. Ambassador K. D. Deval honored the memory of the martyrs of this great tragedy and laid a wreath at the Tsitsernakaberd memorial".

This behavior of the Indian embassy only "irritated" the Armenian nationalists. The public organization "Alternative Yerevan Municipality" posted photos of the monument on its Facebook page, adding that the monument to Mahatma Gandhi in Yerevan should be demolished.

“Gandhi was an Armenian hater and was an ally of Ataturk. We will fight for this monument to be demolished. He has no place in Yerevan, ”the organization noted. Opponents of the monument emphasized that Gandhi “denied the fact of the“ Armenian genocide ”in Ottoman Turkey. After that, the monument was pelted with chicken eggs. And on the evening of April 28, 2021, several Armenian Telegram channels published photographs showing that the statue was engulfed in flames.

An international scandal erupted. India unambiguously perceived the desecration of the monument as a gesture hostile to the Indian state, which ran counter to the official assurances of Yerevan about "Armenian-Indian friendship". The Armenian authorities were forced to take the monument to Mahatma Gandhi under increased protection and place a surveillance camera around.