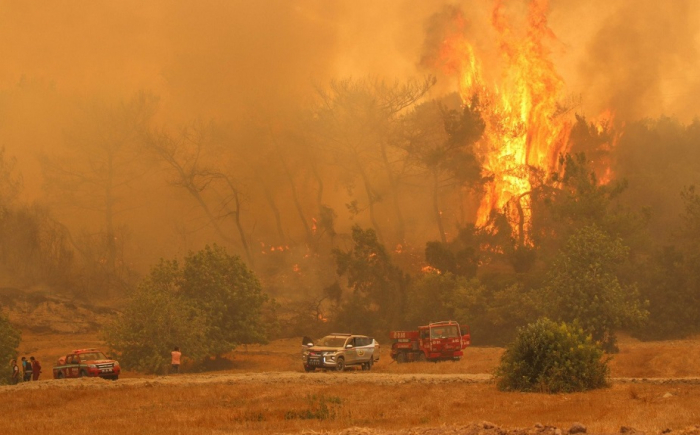 In Turkey, in the Mediterranean and Aegean Seas regions, fires are raging, the largest forest in recent decades. According to the latest data, eight people died as a result of fires in Turkey, more than 900 were injured. Now almost all the outbreaks, and there are more than a hundred of them, are localized.

Azerbaijan, Ukraine, and Russia, who sent their fire-fighting helicopters to the disaster zone, help Turkey to extinguish the fires. Georgian Prime Minister Irakli Garibashvili in a telephone conversation with Turkish President Recep Tayyip Erdogan condolences in connection with the casualties and damage caused by the fires. At the same time, the Georgian government announced its readiness to assist Turkey.

"The Prime Minister of Georgia has already instructed the relevant departments, if necessary, to provide the friendly and strategic partner, the Republic of Turkey, with appropriate assistance," the press service of the Georgian government said.

However, there is a country in the South Caucasus where they not only do not sympathize and do not intend to help Turkey and its people, faced with the rampant fire element but, on the contrary, do not hide their malicious "joy". Any message in Armenian social networks, any post that provides information about the fires in Turkey is quite open - how can you simply be amazed at the abundance of "joy and enthusiasm" about the disasters and tragedies of other people. A real "holiday" reigns in Armenian social networks.

At the same time, the further, the more there is evidence that the fires in Turkey did not arise "by themselves." In principle, hot and dry weather today is in many Mediterranean countries, but only in Turkey have forest fires acquired the character of a large-scale disaster, and all this in one day at the same time.

The plurality of ignition centers and their very "advantageous" location from the point of view of the further spread of fire draws attention to themselves. From the very first hours of the beginning of large-scale fires. And they began in fact on June 29, 2021, and experts said that such numerous foci could not arise “by themselves”. So many cases of "careless handling of fire" could not have happened by accident, and the case was not without deliberate arson.

There were also eyewitnesses to the arson. So in the forest zone in the Jikchili region in the Antalya region, the forest was set on fire by people who have not yet been identified (and have not yet been caught). The mother and daughter found the arsonists from the balcony, they also began to sound the alarm and the residents quickly extinguished the fire.

Also, Turkish President Recep Tayyip Erdogan announced that the republic's law enforcement agencies detained a suspect in setting fire to a forest in another region - the province of Mugla. The head of the Turkish state also said that the authorities do not exclude the occurrence of forest fires in the south of the country as a result of deliberate arson.

And on August 1, 2021, confirmation of these assumptions appeared. The group with the eloquent name "Children of Fire", associated with the terrorist "Workers' Party of Kurdistan", which in turn is associated with the Armenian special services, claimed responsibility for organizing large-scale forest fires. The message about these terrorists-arsonists, who, like their patrons, it would be more correct to call “Children of Satan”, was greeted with enthusiasm in the Armenian social networks.

Those who are really behind the fires and arson of forests in Turkey can be seen with the naked eye. The true culprits of arson and the death of people in fires do not even consider it necessary to hide. And here the behavior of the Armenian occupiers and terrorists in the Azerbaijani Kelbajar is immediately recalled. Burning down the houses of Azerbaijanis, trying to burn down the forests of Azerbaijani Karabakh, they not only did not hide their crimes but, on the contrary, were “proud” of them and demonstrated their total intention to “burn everything that could burn” their hatred for other people.

Just like now the Armenian nationalists, even "out of decency", do not want to hide their truly devilish "delight" in the suffering and death of other innocent people. Moreover, those who are not guilty of the mythical "genocide" (and in social networks, Armenian nationalists directly say that this is "revenge for genocide").

Neighborhoods with such “children of fire” or “children of Satan and hellfire” and the presence of their “fifth column” inside Georgia should alert the Georgian public and Georgian patriots. Moreover, today after the fires in Turkey and the reaction to them showed the true face of the representatives of the "ancient Christian people". In whose reaction to disasters, there is not even a trace of Christian, but also simple human compassion for other people. And here it is advisable to take a fresh look at some not fully investigated facts of recent Georgian history.

Let us recall that in hot August 2008, during the Russian-Georgian armed conflict, numerous fires were identified in the Borjomi Gorge. Moreover, large-scale forest fires in the vicinity of Borjomi began when the main hostilities ceased on August 16, 2008. As it was then assumed by the Georgian media - after the bombing of the Borjomi Gorge by the Russian Air Force. As of August 22, 2008, 500 hectares of the Borjomi-Kharagauli reserve were burned down.

However, even then there was also the opinion of experts that, firstly, it was impossible to achieve such large-scale fires by bombing, and secondly, active hostilities ended on August 12, 2008, an armistice was signed and from that date, there were no combat sorties of the Russian Air Force. Until August 16 (that is, more than 4 days), the centers of forest fires could not have been “unnoticeable”. Those. Georgian forests were set on fire on purpose.

And now you can guess who did it. Representatives of the "fifth column" who became active than from among the Armenian "Javakhk" separatists. Their organizations were then put on alert. Armenian nationalists hoped that the Russian army would reach Samtskhe-Javakheti and help organize a separatist rebellion against the central government on the pattern of the “Artsakh” one. And although, as we know, the "march" to Akhakalaki expected by the enemies of Georgia did not happen then, there is every reason to think that the Armenian "Javakhk" separatists-saboteurs began purposefully setting fire to the Borjomi forests, awaiting the arrival of the Russian occupation troops.

The circumstances of the occurrence of large-scale forest fires in the Borjomi Gorge in August 2017 (then Azerbaijan and Turkey helped to extinguish the fires in Georgia) and in May 2019 are also not fully studied. The police suspected deliberate arson as one of the main causes of the fires, but the arsonists were never found ... But a lot was in the handwriting of Armenian extremists. Recall that the Armenian separatists in the Samtskhe-Javakheti region, who do not like the fact that the Borjomi municipality included in this region is populated mainly by Georgians and this does not allow the Armenian population to achieve "dominant dominance" in this Georgian region.