The Italians did not want to defend Georgia and the South Caucasus from the Bolsheviks ... Will they 'protect' the Armenians? 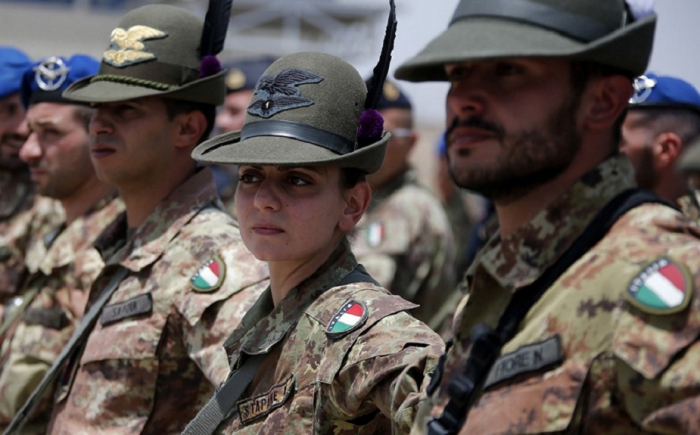 Apparently, the Armenian nationalists and revanchists have a new "hope". Earlier there was hope for a "friendly France", but the French are still limited to statements. Paris is clearly in no hurry to send its troops to the region, and it is not clear how they can do it in practice in the current situation.

But there is one more country that has recently been "geopolitically linked" with France. This is Italy, which is connected not only with the French... It is important to note that the Vatican, whose initial project is largely Armenian nationalism, in fact, is also a determining force in Italian politics today.

Recently, an Italian military delegation headed by the head of the office of international relations of the General Staff of the Italian Armed Forces, Brigadier General David Morpurgo officially visited Yerevan. On July 15, 2021, military-political consultations were held between Armenia and Italy. It was decided to resume cooperation activities, which were interrupted last 2020 due to the coronavirus pandemic, and an agreement was signed that provides for cooperation in the defense sector this year between Italy and Armenia. In Armenia, they even started talking about the possibility of attracting not only French but also Italian troops to Zangezur in order to disrupt the implementation of agreements on unblocking communications.

But here, even if we hypothetically admit such a possibility, the question of Georgia’s position may arise (the Italian contingent can enter Armenia only through Georgian territory). It is known that the Georgian Orthodox Church, despite all the Vatican's attempts to "flirt" with it, categorically does not want Georgia to be in its "orbit", and the Italian presence in the South Caucasus will automatically mean a sharp strengthening of the Vatican's positions in the region.

In addition, those who are interested in the history of Georgia already know the precedent when the Italians, in fact, "threw" the Georgians, not wanting to provide them with protection in the face of the Bolshevik expansion. This ultimately cost Georgia the loss of independence. We need to dwell on the latter in more detail.

After the First World War, the Entente hatched plans to support the independence of the young states of the South Caucasus, primarily Georgia, in the face of the Bolshevik expansion. On the other hand, the British who brought their troops into the region did not want a military clash with Soviet Russia themselves. Moreover, they formally continued to recognize the entire Caucasus as part of "one indivisible Russia" as an ally in the Entente (the White Guard movement in 1919 was not yet defeated by the Bolsheviks, but it categorically refused to agree with the independence of the South Caucasus countries).

One way or another, but in June 1919 Great Britain decided to evacuate its armed forces stationed in the Caucasus, and the question of replacing them with Italian units was brought up for discussion by the Entente Supreme Council. Then Italian Prime Minister Vittorio Emmanuele Orlando agreed to send troops to Georgia. If this had happened, then the "Sovietization" of Georgia through the Bolshevik intervention would hardly have happened, because the then still weak Soviet government did not particularly want to conflict with Italy. Those. Italy could in 1919 act as a guarantor of independence not only for Georgia, but at that time the still independent Azerbaijan and Armenia.

However, on June 21, 1919, a change in the Cabinet of Ministers took place in Italy. The post of prime minister was taken by Francesco Saverio Nitti, who immediately opposed the plans of the Orlando government to send troops to Georgia. At the conference, this decision was announced on June 27 by Italian Foreign Minister Tommaso Tittoni.

Nitti himself later in his book argued for the "correctness" of his decision:

“When I took over the reins in June 1919, the Italian military expedition to Georgia, prepared not only with the consent but also at the request of the Entente, was already ready. The few British troops that had been there being recalled. The 12th Army Corps, consisting of two infantry divisions and a detachment of Alpine riflemen, was ready to march. Georgia has enormous mineral wealth, and it was believed at the time that it could supply Italy with a large number of raw materials it lacked. It struck me that not only the government, but also a number of very smart financiers and, in general, people with a progressive mindset were convinced supporters of this expedition. But I, in spite of the strong opposition I met, decided immediately and once and for all to abandon this enterprise, rendering assistance to a purely commercial initiative. Of course, the Allies did not seek to deliberately involve Italy in a sad adventure. However, the consequence of the expedition would undoubtedly be direct war between Italy and the Moscow government, which would lead to unforeseen results. Indeed, a little time passed, and Georgia fell into the hands of the Bolsheviks, who sent an army of one hundred and twenty-five thousand there. From that time on, the Georgians cannot free themselves from them. If Italy organized this expedition, it would find itself involved in a terrible military adventure, the theater of operations would present extraordinary difficulties in terms of its remoteness, high cost of transport, etc. And for what purpose? Before the war, Georgia was part of the Russian Empire, and none of the Entente countries considered it unfair. On the contrary, despite the fact that Russia already possessed a vast territory and dominated the Caucasus, the Entente promised her Constantinople, the straits, and a significant zone in Asia Minor. How could one strive to take away from Russia the territory that it legally considered its own?"

Let's call a spade a spade. The Italian authorities were simply frightened by Bolshevik Russia, which was still very weak at that time, and in 1920, moreover, would suffer a shameful defeat from Poland. That is, to fight with Italy, to the aid of which the allies in the Entente would inevitably come (as repeatedly during the First World War), Soviet Russia was unlikely to become.

But the Italian authorities "did not want to risk it." They attributed their cowardice and indecision to “difficulties”, “Russia's rights to the Caucasus,” and so on.

If Italy did not want to risk then in 1919, having every opportunity to gain access through Georgia to Baku oil, the main "prize" in the South Caucasus, then will it take risks now for the crazy adventures of the bankrupt Yerevan regime? The question is rhetorical.

On June 9, 1920, almost exactly a year later, Francesco Niti was forced to resign from the post of Prime Minister of Italy. Giovanni Giolitti became the prime minister. The question of sending the Italian corps to Georgia was again raised.

But time was lost. Soviet Russia has already occupied Azerbaijan and Baku. Namely, the oil fields of Baku, and not the "independence of Georgia" really attracted the Italians to the South Caucasus and the Entente. It was clear that the "Sovietization" of Armenia and Georgia was a matter of time.

In addition, Italy's relations with the Kingdom of Serbs, Croats, and Slovenes (future Yugoslavia) sharply deteriorated because of the city of Rijeka (Fiume) and a number of other territories on the Adriatic coast that were previously part of Austria-Hungary. Up to the point that there was talk about the possibility of war between the former allies in the Entente.

As a result, although the issue of sending the Italian military contingent to Georgia was again on the agenda, nothing was really done for this. Until Georgia was seized by the Bolsheviks in February-March 1921, then the question "disappeared by itself."

One way or another, but if you call a spade a spade, the Italians in 1919-1921. betrayed Georgia and other states of the South Caucasus. It is unlikely that the situation will be otherwise today. Moreover, if we talk about the "Italian fighting spirit", then it was initially and so not very high, for 100 years it has degraded fundamentally. So the hopes of the revenge-seekers in Yerevan for Italian military aid are most likely futile.