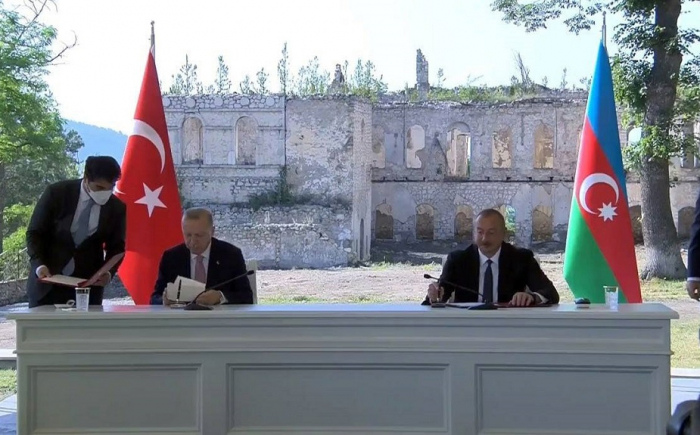 On June 15, 2021, Turkish President Recep Tayyip Erdogan visited Nagorno-Karabakh for the first time, wherein Shusha, together with Azerbaijani President Ilham Aliyev, signed a declaration of alliance between the two countries against a very interesting background. The ruins in the background are what the Armenian invaders and "Artsakh" separatists left behind in the recently liberated Azerbaijani city of Shusha. The same ruins can be seen everywhere in the still-occupied Georgian Abkhazia.

The fact that following the meeting between the Presidents of Azerbaijan and Turkey, it was against such a background (these ruins are the ruins of the palace of the Azerbaijani poet Khurshidbanu Natavan, daughter of the last Karabakh khan) that the Shusha Declaration was signed, affecting all areas of cooperation between the two countries, including issues of mutual assistance in the defense sphere - momentous moment. From now on, Turkey, being a full-fledged member of the most powerful military-political NATO Alliance, will do everything to, firstly, destroy all the destructive consequences of separatism in the South Caucasus region, and secondly, cool the "hotheads" of those who still rely on separatism.

The Shusha Declaration between Turkey and Azerbaijan means in fact that Azerbaijan and NATO member Turkey finally and officially become allies in the defense sphere. The Declaration provides for several fundamental points, including joint efforts to reorganize and modernize the armed forces, conduct joint actions in the event of a threat or aggression from third states or states against the independence, sovereignty, territorial integrity, inviolability, or security of the internationally recognized borders of any of the parties, resolving the issue of opening the Zangezur corridor connecting Azerbaijan and Turkey and much more. In addition, Turkey will soon open its consulate in Shusha.

In his speech in Shusha, President of Azerbaijan Ilham Aliyev highlighted the moment that the Shusha Declaration is a continuation of the Kars Treaty signed a hundred years ago, which is now fiercely opposed by Armenian nationalists. Let us recall that the Treaty of Kars provides for existence in the region of only three states - Georgia, Azerbaijan, and Armenia, and their borders are clearly fixed. The Kars Treaty does not provide for any non-states "Abkhazia", ​​"South Ossetia" and "Artsakh". This means that the territorial integrity of both Georgia and Azerbaijan must be restored by this agreement.

On the eve of the visit of the President of Turkey to Azerbaijan, several very significant events took place in the liberated Karabakh. Earlier at the NATO summit, it was confirmed that Georgia and Ukraine will be full members of NATO soon.

Moreover, the fact that these are not empty words can be seen from the almost panicky statements made on the eve of this by Russian President Vladimir Putin that with Ukraine joining NATO, the flight time of missiles from Ukrainian Kharkov to Moscow will be reduced to 7-10 minutes. Putin also stressed that he does not consider talking about the possible inclusion of Ukraine in the North Atlantic alliance as "chatter".

Understandably, the Kremlin will no longer "hold on with all its might" for the separatist projects in such conditions. As the Russian proverb says on this occasion, “I’m not up to fat, I would live”. The separatist regimes recognized as "great and mighty" of Nauru and Nicaragua do not save Russia from a new geopolitical configuration that is extremely disadvantageous for it, in which the Kremlin has nothing to object to if NATO raises the question of the immediate withdrawal of Russian troops from the territory of the Alliance countries, including new members - Ukraine and Georgia.

Armenian nationalists are also panicking about the new prospects for geopolitical changes in the Caucasus. To such an extent that the Armenian media immediately began to dazzle with the following news: "The Ministry of Foreign Affairs of Abkhazia: The statement of NATO countries clearly demonstrates hypocrisy and double standards" (https://news.am/rus/news/649095.html). Here the Armenian news agency betrays the separatists' "indignation" by the fact that NATO member states do not forget about their support for the territorial integrity and sovereignty of Georgia and demand that Russia withdraw its troops from Georgia. At the same time, the main Armenian news agency presents the news as if separatist Abkhazia is a “full-fledged state”. Nowhere is it reported that the Sukhumi regime is separatist, puppet, self-proclaimed, unrecognized. Those. in fact, Yerevan's support for separatism on the territory of Georgia continues

The fact that Turkey is the main initiator of Ukraine and Georgia joining NATO is also confirmed by the Armenian edition in the article by Romella Mnatsakanyan under the eloquent heading "A terrible dream comes true" (https://armenianreport.com/ru/pubs/284335/) published on the eve of the visit Erdogan to Shusha, which says the following:

“According to the Greek media, Erdogan will demand support from NATO to withdraw the South Caucasus from the influence of Russia. And the Alliance countries will support him out of fear of a Russian threat. This is very important news, which for some reason is not given due importance. The country was forced to go deep into a showdown between the current and the previous government, and this is very dangerous.
Indeed, if this project is implemented, Armenia will face colossal challenges and dangers that threaten national security and the very existence of our state. Yes, I'm not exaggerating, that's how it is. And a liar or an idiot is the one who claims otherwise. It's just time for us to learn to reason not in parochial categories. "

"The withdrawal of the Caucasus from under the influence of Russia" is, first of all, the elimination of the separatist projects of Abkhazia and the so-called. "South Ossetia" or their "phantoms" - as, for example, the remnants of the former "Artsakh", where Russian peacekeepers are temporarily housed. It is precisely the separatist projects and their phantoms that allow Russia to maintain a military presence in the South Caucasus, which no longer suits Europe, the United States, or after the signing of the Shusha Declaration and Azerbaijan’s closest and official ally, Turkey.

If same Georgia becomes a NATO member, then there will be no talk of any preservation of the Russian occupation forces in Abkhazia and Tskhinvali. As for the Russian border guards in Zangezur and peacekeepers in Karabakh, they have a clearly defined task - in 5 years to establish the functioning of the Zangezur corridor and the peaceful integration of the Armenians of Karabakh into Azerbaijani society! Everything! After that, if the above tasks are completed promptly and without incidents, then Russia can count on fruitful economic cooperation with the countries of the region and participation in international transit projects. But there is no talk of any military presence about any Russian military bases.

Therefore, Turkey and its NATO allies need the earliest and unconditional "closure" of all separatist projects in the South Caucasus without exception. First of all, Sukhumi and Tskhinvali. And the restoration of the territorial integrity of Georgia, the unconditional support of which Recep Tayyip Erdogan recently officially announced during Irakli Garibashvili's visit to Turkey. And the Shushu Declaration is a milestone here so that irresponsible politicians and military people in the Russian Federation who live in phantoms of the past do not even have a thought to further support separatism and "spread" it to Azerbaijani Karabakh. And the hopes for the arrival of revanchists-Kocharyanites in Armenia are in vain. In any case, Armenia will need to fulfill the agreements reached on November 10, 2020, unblock the Zangezur corridor, and in the event of attempts at revenge, there will always be an adequate response.