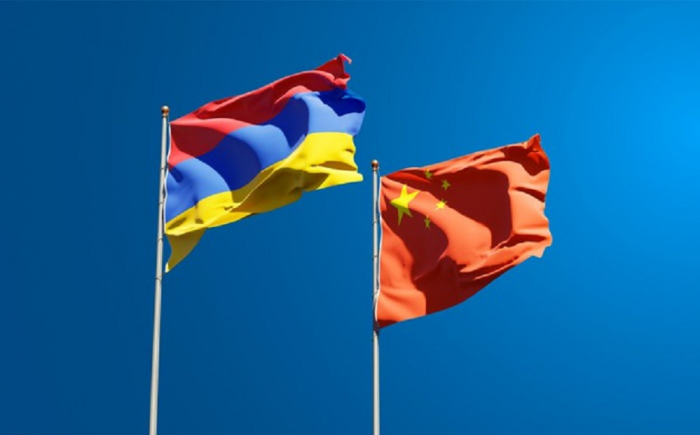 It is gradually becoming clear into what kind of a murderous adventure for the Georgian state the Armenian "Christian brothers" with the so-called "Armenian-Iranian corridor" are trying to drag Georgia into. In fact, this corridor will mean the liquidation of the Georgian state and will last until the separatist Abkhazia, which, apparently, the Armenians already consider "theirs". And in terms of the ethnic composition of the population, where the Armenians have already become the majority and dominant in the economy, Abkhazia is already, in fact, "Armenian".

Of course, in order to implement their new plans of expansionist plans, the Armenian nationalists intend to attract new geopolitical players to the South Caucasus region. In particular, China. These plans are devoted to the revelations of the editor-in-chief of the Realist Information Agency Sarkis Tsaturyan, which appeared just on the eve of the visit of the Prime Minister of Georgia Irakli Garibashvili to Yerevan. We present these plans published on the website of the Realist news agency under the heading "The military base of China in Syunik will secure Armenia and Artsakh" (https://realtribune.ru/voennaya-baza-kitaya-v-sjunike-obezopasit-armeniju-i-arcah):

“Over the next 25 years, Beijing will do everything to secure Iranian borders. And in this context, a military alliance with Armenia looks like a logical and timely enterprise, Sarkis Tsaturyan notes.
The past war has shown that in the event of an attack by the Baku-Turkish kleptocracy, Armenia can only rely on itself, the editor-in-chief of IA Realist Sarkis Tsaturyan believes.

“We need a Chinese military base in Syunik. And not instead of a Russian military base, but together with it. This is normal world practice. Pay attention to Qatar, whereas many as 4 bases are located - 1 American, 1 British, and 2 Turkish. Why don't you like the Doha experience? A very successful country, ”he writes in his telegram channel.

Why a Chinese base?

“First, Iran recognizes only the presence of the Chinese People's Liberation Army on its northern border. The bases of the United States and even France in Tehran will be a priori viewed as hostile, especially against the background of Turkey's growing regional influence.
Secondly, the presence of the PLA will help build and secure the Iran-Armenia-Georgia railway corridor with access to the Black Sea ports and Abkhazia. Without the direct participation of China, this project will never happen.

Third, in the next 25 years, Beijing will do everything to secure Iranian borders. And in this context, a military alliance with Armenia looks like a logical and timely undertaking.

Fourth, the administration of Joseph Biden and the European Union will support the Armenian-Chinese military alliance, as it will strengthen Iran's position and give trump cards to a number of Arab countries.
Fifth, the Chinese military base in Syunik will help Russia avoid a direct military clash with the Turkish army on the territory of Armenia (this is really already in the medium term), ”Tsaturyan explained.
In his opinion, Armenia and “Artsakh” need years of safe socio-economic development: “With the legalization of Turkey's military presence in“ Artsakh ”, which happened with the consent of Russia and Israel, it is no longer possible to hesitate. The future must be built today."

Disappointed in Russia, which did not want to "expand" the borders of "great Armenia" at the expense of its neighbors, Armenian nationalists are betting on China. According to their plans, it is China that should, in the Armenian interests, organize “corridors” beneficial to Yerevan and organize the redrawing of borders.

Moreover, in which direction - a direct hint is given. In the direction of Georgian Abkhazia. And apparently, they hope that if the Georgian statehood is not "trampled" by the Russian military in the interests of the "ancient people", then the Chinese military will do it.

Armenian nationalists not only do not see Abkhazia as a part of Georgia, although they want to involve the Georgian authorities in their adventures. The main goal "the Iran-Armenia-Georgia railway corridor, with access to the Black Sea ports and Abkhazia", ​​is no longer even concealed by the Yerevan authorities. This is despite the fact that in Abkhazia itself, the number of the Armenian community is growing by leaps and bounds, and, according to some estimates, it is already twice the number of the Abkhaz proper. Those. in fact, it is a "second Armenian state".

Of course, by intrusive "invitation" of the Chinese military to Zangezur ("Syunik" in Armenian terminology), Armenian nationalists feverishly want to prevent the implementation of the Zangezur corridor project, which Armenia is obliged to organize in accordance with the terms of the November peace agreement.