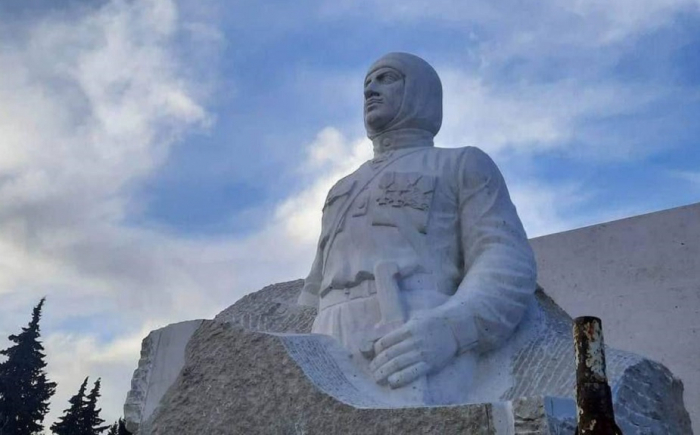 On the eve of Victory Day on May 9, the commander of the Russian peacekeeping mission in Karabakh, General Rustam Muradov, ordered the dismantling of the monument to the Nazi criminal Garegin Nzhdeh in the Azerbaijani city of Khojavend, which is under the control of Russian peacekeepers. After that, there was a hope that finally, the final deliverance of both the Azerbaijani land and the citizens of Azerbaijan of Armenian nationality from the ominous shadow of the past would begin. Moreover, both Azerbaijani and Russian veterans have applied to dismantle the monument to Nzhdeh in Karabakh.

Thus, the Dolgoprudny public organization of war veterans, the labor of the Armed Forces, and law enforcement agencies near Moscow, appealed to the Ministry of Foreign Affairs and the Ministry of Defense of Russia with a demand to urgently dismantle the monument to the Nazi. The veterans' statement spoke about the crimes against humanity committed by the “Armenian Legion” formed by Garegin Nzhdeh during the war against thousands of civilians in Poland and Ukraine and the murders of more than twenty thousand civilians in Western Crimea. The veterans noted that the location of the monument on the territory where the Russian peacekeeping contingent will celebrate Victory Day on May 9 undermines the authority of Russia as a principled fighter against the glorification of Nazism.

Alas, neither the veterans' demands nor the simple human respect for the memory of grandfathers and great-grandfathers who gave their lives in the fight against Nazism forced the peacekeepers to act decisively and put an end to the glorification of Nazism in Karabakh. On Victory Day, May 9, the monument to the fascist still desecrated the Azerbaijani land of Karabakh. Moreover, everything was "arranged" by the Armenian nationalists in such a way that the Russian peacekeepers seemed to be "frightened" of their threats. And threats against the Russian peacekeepers began immediately after it became known about the decision to dismantle the monument to the fascists. Armenian nationalists placed a "frightening" inscription near the monument to Nzhdeh in Khojavend: "Whoever tries to demolish the monument will be shot."

So what does it do? Russian soldiers are afraid of the Nazis, and those they are protecting. After all, had it not been for Russian peacekeepers, the Azerbaijani authorities would have quickly put an end to any manifestations of nationalism and Nazism in Karabakh, and those guilty of glorifying Nazism would have been immediately brought to justice.

Armenian neo-Nazis seem to be triumphant and openly mock Russian soldiers. This is how one can interpret the recent aggressively Russophobic material “Russians will pay for Shushi and the rest: Armenian victories are yet to come” (https://www.lragir.am/ru/2021/05/09/204688), which appeared in close to Armenian Prime Minister Nikol Pashinyan to lragir.am. Here the threats against Russia and the Russians are in plain text. Here is the content of the material:

“Inhabitants of Artsakh Martuni (Khojavend - ed.) Won the first victory in the psi-war unleashed by Moscow and Baku, defending the monument to Nzhdeh.

In another part of "Artsakh" - in Ahavno, the head of the Andranik community, together with his people, heroically defends the village, preventing military, psychological and other kinds of provocations. This is the Armenian land, the Armenian law, who are you, says Andranik.

To many, these fragments may seem insignificant, but they carry important layers - the sovereign decision and consolidation of the people to implement this decision, dignity, awareness of their own rights, and their defense: these are the qualities on which national development and victory will be built.

The qualities deprived of the regimes that succeeded each other for 30 years did not formulate the national agenda and the Armenian right to victory, the regimes that entered the vile bazaar, and cheap bargaining. This should eventually lead to such a result, and neglect of this is a sign of inadequacy or a desire to save one's own skin.

In Artsakh, the stage of Moscow's proxy war, which boiled down to the deployment of Russian troops in exchange for the defeat of the Armenians and the surrender of the Hadrut-Shushi line, was followed by a phase of the psi-war against the Armenians. Refusal to discuss the status of "Artsakh", rejection of the Genocide, inclinations to the cornerstones of the Armenian identity - language, church, and memory - are elements of this war.

Psi-war is in a sense more terrible than its hot phase: it is said - be afraid of those who mortify the flesh, but even more - those who mortify the soul. Now Moscow, with the help of its Absheron makloviks, is doing exactly this, the goal is to deprive the Armenian people of self-confidence, resistance, sovereignty, dignity, and the ability to defend their rights.

Against this background, the victories in Martuni and Ahavno are excellent, at the same time, obliging examples. The Armenian people have these qualities, and they must make their choice from this starting point. The carriers of the disgusting polemics "former-present" should be categorically rejected as accompanists of the Russian-Turkish aggression and its foothold. The memory of 12 thousand victims of the first and second Artsakh wars and 330 thousand Armenians who died in World War II requires this.

Russia will pay dearly for Shushi and the rest. The unprecedented campaign against Armenia is a sign of the agony of the empire. The dying empire has nothing to give the Armenians: our victories are yet to come."

The Armenian nationalists, distraught with Russophobia, do not understand whom they are threatening. After all, it is enough for Russia to simply leave the South Caucasus - and the Armenian neo-Nazi statehood will simply be liquidated. And in such a state, Armenian nationalists spit on Russia and threaten her with reprisals for "daring" not to worship before the Nazi executioner.

It is difficult to imagine a greater humiliation for Russia.

In the end, the Russian people need to answer to themselves - do they really have to defend the ideological heirs of those with whom their grandfathers and great-grandfathers fought? And to receive about them not gratitude, but symbolic "spitting" towards Russia, humiliation, and threats?

If the Armenian nationalists like Nzhdeh so much, then it is high time for Russia to make it clear to its ungrateful and impudent "clients" that they choose - either the glorification of the Nazi or the help of Russia. If they have at least the remnants of reason, then the monument to Nzhdeh should be demolished.

If the Nazi monument is more expensive for the Nazi-drugged Armenians of Karabakh - well, Russian peacekeepers can leave Karabakh, giving the Azerbaijani authorities the right on their own land to deal with the elimination of the facts of the glorification of Nazism. How long after that will the Armenian Nazis be able to defend the monument to Nzhdeh from the Azerbaijani army?