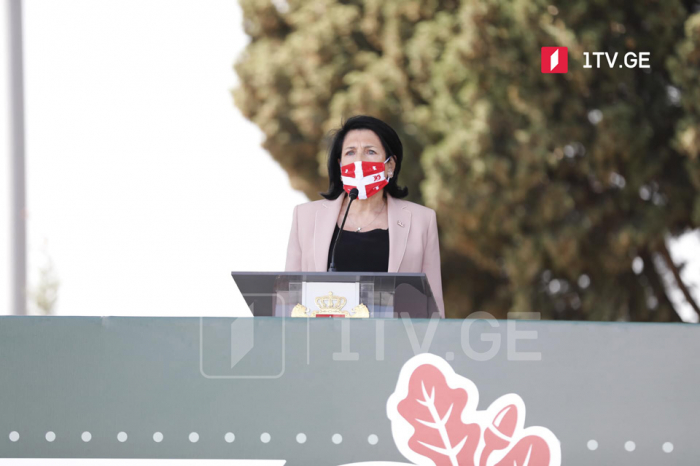 The Georgian Army is united, apolitical, loyal to the country and its people, and thus the best example of unity. I congratulate the entire population of Georgia on this holiday. I congratulate those who serve with dedication in international missions,” said President Salome Zourabichvili on the occasion of the 30th anniversary of the Georgian Defense Forces.

The President thanked the Georgian military for their service.

“Today, we have a high standard of a defence force that has been involved in the international peacekeeping missions for many years and contributes to the fight for global peace and security. The professionalism and combat readiness of our military always deserves high praise. International partners express confidence in the Georgian Army and Georgia. These 30 years were difficult years of formation and testing of the Georgian Army, its struggle for national interests, national dignity, independence of the country, territorial integrity and freedom. It was a struggle for our Western, our European choice, for a dignified future, so the payoff was huge. Many lost lives, lost health, bereaved families. We bow to the victims. We will honour their memory, “said Salome Zourabichvili.

According to the President of Georgia, every citizen must take care of the homeland. She elaborated that the tasks that Georgia has ahead are de-occupation and Euro-Atlantic integration. For that, Georgia needs continuous and effecient cooperation with strategic partners. The President emphasized the role of the Georgian Army in the difficult months of the pandemic.

“Today is a common holiday, and it unites the whole of Georgia. The Georgian Army is united, apolitical, loyal to the country and its people, and thus the greatest example of unity. I congratulate the entire population of Georgia on this holiday. Congratulations to those who have dedicated themselves to international missions. They are the ambassadors of Georgia to the world fighting for peace. I congratulate the veterans. I thank our strategic partners, the United States of America, NATO member and partner countries. Their support and assistance is great,” Zourabichvili said.