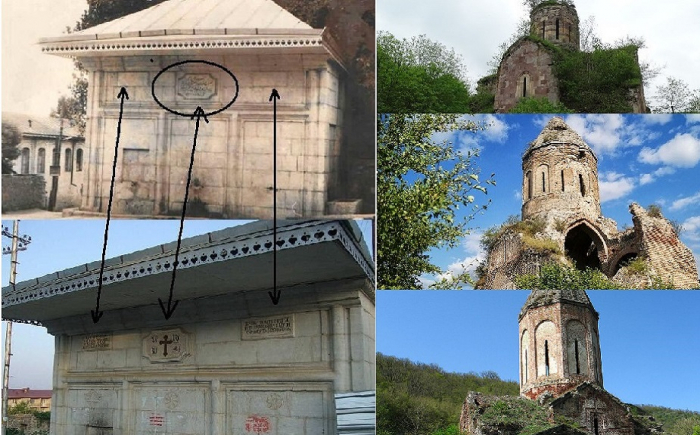 Recently, the Armenian side began to accuse Azerbaijan of allegedly "destroying an ancient inscription" and "Christian symbols on an alleged" Armenian architectural monument "- a pavilion over the Mamai spring in the liberated city of Shusha in Karabakh. A photo is being circulated on social networks where an Azerbaijani worker liquidates an inscription in Armenian over a spring, made after the occupation of this Azerbaijani city.

Recall that the Mamai spring (located in the so-called Mamai quarter of the city of Shusha) was subjected to acts of vandalism by the Armenian invaders after their capture of the city in 1992. Initially, in the upper part of the pavilion above the spring there was an inscription stating that the spring was erected by Samed aga Javanshir in 1318 AH, that is, in 1900 according to the Gregorian calendar. Destroying traces of Azerbaijani culture, the Armenian invaders erased the inscription, and in its place, they engraved across and made inscriptions in Armenian and Russian. All of this was in flagrant violation of the Hague Convention for the Protection of Cultural Property during Armed Conflict.

A historical analogy can be drawn with regard to the accusation of the Armenian nationalists against Azerbaijan of allegedly "desecration of the Christian symbol". When, during the Great Patriotic War, the Nazis came to conquer our lands, we recall that they used a swastika (a cross with bent ends) and the symbol of the cross. Crosses were worn on Nazi tanks, on fascist planes, on German uniforms, and in crosses as awards were sported by German soldiers and officers. Where the occupation commandant's offices were settled, there were also plenty of crosses.

Although, as you know, Nazism was infinitely far from Christianity. As well as the current Armenian nationalism. Suffice it to recall that the idol of Armenian nationalists Nazi Garegin Ter-Harutyunyan known as Garegin Nzhdeh (the prefix "Ter-" itself speaks of his origin from a family of priests) not only renounced the faith and service of his fathers and grandfathers but positioned himself as a pagan and all of him the teaching is permeated with pagan (i.e. anti-Christian) motives.

And what were the same Christian peoples - Russians, Ukrainians, Georgians - to do after the liberation of the lands from Nazi occupation? Praying for these Nazi crosses? Worship the corps of captured German tanks marked with crosses as "shrines"? "Safeguard" the symbols of the occupation?
Of course not! As a result, all symbols of the occupation - both swastikas and crosses drawn or knocked out by the Nazis - were destroyed immediately after liberation.

Therefore, the screams of Armenian propaganda about the alleged "vandalism" of Azerbaijanis and "desecration of Christian symbols", or rather, over the symbols of occupation that the Armenian invaders left on the lands of Azerbaijani Karabakh - it's like hypocritically worrying about allegedly "Christian symbols" - crosses and swastikas - the atheist Nazis of Hitlerite Germany.

All Albanian churches of Karabakh, which were appropriated by the Armenian invaders during the occupation, are now under the protection of the Azerbaijani state. They will be restored and are not in danger.

But the "remakes" created by the invaders - all sorts of barracks, commandant's offices, as well as plates and stones impudently "marked" with Armenian nationalist symbols can be dismantled. This is the right of the Azerbaijani people. In the end, the Armenian invaders did not ask the indigenous people, Azerbaijanis, if they wanted them to leave their inscriptions and symbols here.

Especially when there are facts that the Armenian invaders marked the captured pavilion above the Mamai spring, created by the Azerbaijanis with their symbols. At the same time, documents and photographs about the original appearance of the architectural monument have been preserved. Old photographs of this spring clearly show an Azerbaijani inscription in Arabic script. Moreover, there is a video filmed by the Armenian invaders in May 1992 after their capture of Shushi, where you can see an Armenian priest desecrating a spring and trying to destroy an inscription in Arabic script.

And to the Armenian nationalists themselves, who scream about "anti-Christian Vandalism" there is a counter-question - how do they themselves relate to Christian symbols and Christian shrines of other nations? In particular to Georgian churches and Georgian shrines?

As you know, there are dozens of Georgian temples and monasteries on the territory of the Republic of Armenia. Almost all of them are in a terrible state. Wherever possible, Georgian inscriptions and frescoes get lost and destroyed. The unique Georgian monasteries of Kobairi, Khnevanka, Srvegi, Kirantsi have been turned into ruins, not to mention the Khujabi monastery, which the Armenian side brazenly appropriated by moving the border and now this monastery is being destroyed.

The Georgian monastery of Akhtala, appropriated by the Armenian Church, is also in a deplorable state (it functioned as a Georgian Orthodox monastery both before the accession to the Russian Empire, and after, until it was closed by the Bolsheviks). Until now, the dome of the Akhtala temple has not been restored, although tourists are brought here and the monastery is shown as supposedly "a monument of Armenian architecture", despite the fact that all the inscriptions and frescoes in the monastery are Georgian.

And how did the Armenian militants, together with the separatists in Abkhazia, outraged the Georgian Christian shrines? All Georgian churches in Abkhazia during the 1992-1993 war were captured, priests and monks - killed or expelled. Moreover, the Armenian provocateurs deliberately set the separatists against the Georgian priests - they were killed in the first place, and in general, the separatist movement in Abkhazia, incited by the same forces that organized the "Karabakh miatsum", began as anti-Christian. Suffice it to recall that His Holiness and Beatitude Catholicos-Patriarch of All Georgia Ilia II, who in 1989 arrived in Abkhazia to admonish the crowd darkened by separatism, was met with a hail of stones at the instigation of the same “Christian Armenian brothers”.

And now, in separatist Abkhazia, Georgian frescoes and inscriptions are being destroyed under the guise of "restoration". However, “Christian brothers-Armenians” are not worried about such vandalism. Moreover, wherever possible in Abkhazia, the “Christian brothers”, the Armenians, who became the dominant majority on the separatist territory, knocked down or destroyed all Georgian inscriptions and everything that reminds them that Abkhazia is a Georgian land.