How the Kuban becomes Armenian 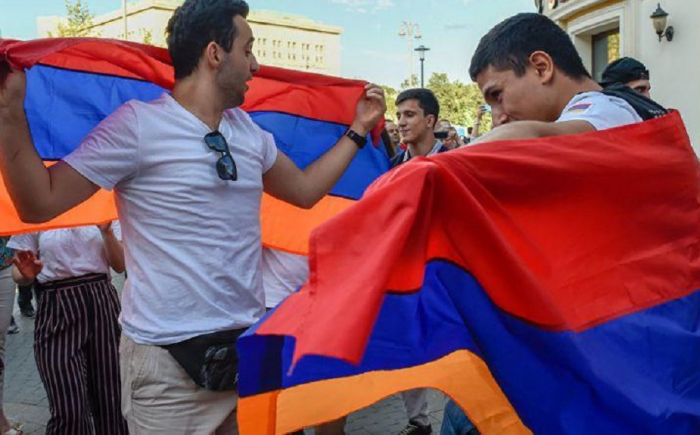 Armenian nationalists "laid eyes" on both Georgian Abkhazia and the territory of the Russian Krasnodar Territory (which is also called the Kuban), which can be seen with the naked eye. After the defeat in the second Karabakh war, the flow of immigrants from the Republic of Arseny and the liquidated separatist "Artsakh" here only increased. In fact, the project for the creation of the so-called. "Armenian autonomy in the Kuban" is being successfully implemented, as can be judged in particular from this video:

However, it is important for Armenian nationalists not only to "grab and settle" on foreign land, to crush its economy but also to oust the population that was previously living. It is even more important for them to "justify" their presence and domination in a foreign land.

In order to claim the lands of Azerbaijan, Eastern Turkey, and Southern Georgia, the myth of “ancient great Armenia” was concocted and used with might and main. Within the framework of this myth, seizures and appropriation of foreign (Albanian, Georgian) churches were carried out, history, inscriptions, tombstones were falsified, allegedly "ancient khachkars" and other artifacts were scattered on foreign lands. As a result, the Armenians themselves, the descendants of recent settlers to the South Caucasus from Turkey, Iran, and the Middle East, sacredly believed that they were "indigenous and ancient" in a foreign land, and the rest, indigenous people, "nomads", "newcomers". "Barbarians", etc.

But with Abkhazia, and even more so with the Krasnodar Territory of the Russian Federation, things turn out to be more complicated if we start from the “ancient history”. Of course, it is possible to “expand” the mythical “great Armenia” to the Kuban and the shores of the Sea of ​​Azov, but too many maps will have to be redrawn, too many false “ancient artifacts” will have to be scattered. In the modern information age, such a blatant lie will no longer work.

How do the Armenian nationalists now explain their "exclusive right" to life and possession of the lands of Kuban and Abkhazia? It's very simple: it is important for them to show that other peoples who live in these lands were “bad”, “uncivilized”, “unreliable”, and most importantly “were against Great Russia and the Russian Empire”. Say, the Armenians, as an “outpost of the Russian Empire” and, moreover, “victims of genocide” live on such a beautiful land quite deservedly.

Such a myth has already been introduced in relation to the Georgians of Abkhazia. The myths and horrors of all those who come to Abkhazia are told about the fact that “the Georgians have betrayed Russia”, as well as about the “Georgian aggression in Abkhazia” and “Georgian fascism”. For "persuasiveness" demonstrating the ruins that actually appeared thanks to the separatists, Russian "liberators" and the same Armenian militants of the battalion. Baghramyan. They say that is why the allegedly "ruined Abkhazia" and "supported the aggression", the Georgian population has lost the right to return to the land of Abkhazia, which the Abkhazians themselves are not very capable of managing. Naturally, the “most worthy” to live in this corner of paradise is, of course, “cultured and hardworking” representatives of the “ancient long-suffering people”.

However, even against the Russians of the Kuban, the Armenian nationalists have "preparations". In order to declare exactly the Kuban Russians "bad" and "unworthy" to live on such a beautiful land.

The Kuban Cossacks are direct descendants of the Zaporizhzhia Cossacks who were resettled to the Kuban by Russian emperors from the territory of present-day Ukraine. Most of the surnames of Russians in the Kuban have exactly the Ukrainian sound and end with "-enko", "-yuk", "-uk" and other "Ukrainian" endings. In the villages of the Kuban, the Ukrainian dialect still dominates.

It is not excluded that, including with the aim of discrediting people with "Ukrainian roots" in the Russian Federation, at the suggestion of the same Armenian lobby, there is a wild Ukrainophobia. And the aggravation of the situation around the Ukrainian Donbas is a great reason for her.

Russians are "proved" that they are the same people, the Ukrainians, are, they say, "pathological traitors, fascists, and bandits." And they are trying to spread this Ukrainophobia “unobtrusively” to the Kuban Cossacks (in reality - patriots of Russia), who have originally Ukrainian roots.

Russian inhabitants are taught with Ukrainophobia to see in every person with a Ukrainian surname a "potential enemy", in contrast to the bearers of Armenian surnames. It is the Armenian lobby and the Armenian propagandists who are most trying to bring Ukraine and Russia into conflict today. The same Margarita Simonyan, famous for her address "Mother Russia, take the Donbas home!" It seems that he is worried not so much about the Donbas, but about the fact that, having quarreled with the Ukrainian brothers, the Russian authorities would bet on the Armenians.

Therefore, the “armenianization” of the Kuban and the anti-Ukrainian hysteria in the pro-Armenian media are closely interconnected. After all, if it continues to be pumped up, then the majority of the Slavic population of the Kuban, who have Ukrainian surnames and Ukrainian roots, will be ranked as "unreliable". And after another exacerbation of relations between Ukraine and Russia, in the Kuban, a "purge" of people with Ukrainian surnames may well begin. They will be thrown out as "unreliable" by the authorities, and replaced with people with Armenian surnames as "the most loyal patriots of Russia."