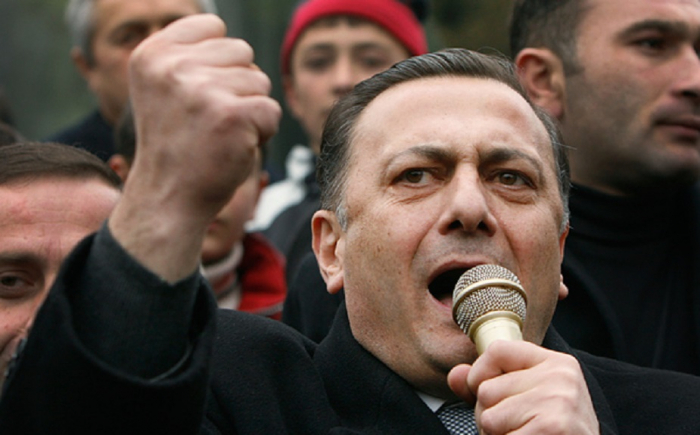 Among Georgian politicians, the leader of the Labor Party, Shalva Natelashvili, has recently been distinguished by scandalous statements and antics. Moreover, some media call him an "opposition politician", passing off his antics and provocative statements as "the opinion of the Georgian society." Although, following the results of last year's parliamentary elections, Shalva Natelashvili's party received only 1% of the votes.

The fact that Laborites Natalashvili scored exactly 1.00%, the minimum percentage required to get at least one deputy mandate under the election law, looks like a strange coincidence in itself. Most likely, certain forces simply "drew" Natelashvili the aforementioned 1.00% of the vote out of their last strength, giving him the opportunity today, along with other opposition parties, to participate in the work of the Parliament.

It remains to be seen who grossly violated the electoral legislation (in reality, more than 0.1-0.2% of voters voted for Natelashvili, who has a strong image of a political clown). However, no matter how many votes Natelashvili “draws” and how many parties of power and opposition are invited to negotiations, he is definitely a political marginal. Nevertheless, this marginal is cited with pleasure in some neighboring states, in particular in the Republic of Armenia.

Natelashvili is unique in this. In addition to provocative statements against Turkey and Azerbaijan, he actively makes anti-Russian statements, sometimes even anti-Western ones. But he basically never touches one country - Armenia. Those. from here it becomes clear whose orders Shalva Natelashvili is fulfilling.

As you know, most of all, Armenian nationalists do not need any Georgia - neither pro-Western, nor pro-Russian, nor neutral. Their dream is to dismember the Georgian state as such and "punch" through the Georgian lands an outlet to the sea for their "great Armenia".

During the catastrophe of the early 90s, when Georgia lost Abkhazia and had over 400 thousand refugees, it seemed that the “right moment” had come for the complete destruction of the Georgian statehood. It was then that one of the "key players" Shalva Natelashvili began to act on the political arena of Georgia.

In general, the “young promising politician” Shalva Natelashvili was “parachuted” to Georgia from Moscow by the time of the collapse of the USSR. In 1989, Shalva Natelashvili completed his postgraduate studies at the Diplomatic Academy of the USSR Ministry of Foreign Affairs. The question arises, how could he enter such an elite educational institution and study there, if he still does not really know the Russian language. It is enough to listen to the interview that Natelashvili gives to the Russian media (the same Echo of Moscow) to conclude that Natelashvili knows Russian very poorly. It is unlikely that he knows better other foreign languages. But someone was "dragging" him upstairs?

You can also be sure whose tasks he was performing at that time. Having received education and training at the USSR Ministry of Foreign Affairs, he was in fact already then a "full-time employee of the KGB", and then of the Russian special services, for which the principle of "the worse the better" acted in relation to Georgia (in words, of course, Natelashvili could call the Russians "occupiers "And threaten" war "). For its "curators", the more confusion and instability there will be inside Georgia, the more conflicts and misunderstandings with neighboring countries, the "better" for the enemies of the Georgian state.

At the same time, Natelashvili got into scandalous stories. Up to the point that somehow he went to the market, began to insult the merchants, and in response they dumped the goods that he was going to buy on his head. Natelashili also constantly arranged squabbles with other politicians, accusing everyone who did not agree with him as “traitors” and “agents of Moscow (whoever spoke!). But the results of Natelashvili's political activities were deplorable. It was at this time that Georgia, having such "personnel" in its Parliament, lost Abkhazia, received over 400 thousand refugees and a complete collapse of the economy. Moreover, the economic decline in Georgia was greater than anywhere else in the former USSR. Apparently such representatives of the “fifth column” as Natelashvili “tried hard”.

However, the hopes of the "sponsors" Shalva Natelashvili and other representatives of the "fifth column" in the 90s did not come true. Georgia survived. And not least thanks to cooperation with Turkey and Azerbaijan. After all, the same anti-Georgian forces in Moscow and Yerevan planned to “bring Georgia to its knees” by “having no alternative” to receiving energy resources from Russia. However, at critical moments in Georgian history, Azerbaijan came to Georgia's aid. It was Azerbaijani gas that prevented the Kremlin from using the "gas noose" and gas blackmail in order to force Georgia to abandon the protection of its national interests, admit the loss of its territories and come to terms with ethnic cleansing.

But for Natelashvili, SOCAR (State Oil Company of the Azerbaijan Republic) is his worst enemy. Here is his characteristic saying:

“SOCAR - this mafia structure is a joint special service of Ivanishvili-Aliyev, which, in addition to other anti-state actions, supplies gas and dirty fuel that we have inherited at a high price, polluting our air with lead. Now the capture of David-Gareji has been added to this, and I don’t understand what the colony means today? Only this was not enough for us, we used to be a colony of great empires, and kept our pride, and now we have become a colony of Aliyev. Isn't that a shame? Only because of this alone Ivanishvili and his pack will be very bitterly condemned, ”Shalva Natelashvili said.

Touching upon David Gareji (another topic where Shalva Natelashvili, allegedly "defending the Church", is trying to ignite the conflict between Georgia and Azerbaijan), this political clown certainly did not mention that SOCAR supplies gas to all churches in Georgia for free. Yes, and Mr. Natelashvili himself, for sure, heats his home with "dirty gas" and not with "environmentally friendly" dung.

Apparently at the request of his "sponsors" Shalva Natelashvili tried his best to open a "second front" against Azerbaijan on the eve of the second Karabakh war. In particular, the statement of Shalva Natelashvili that "the armed forces of Azerbaijan should leave the territory of the monastery complex of David-Gareja" on September 25-26 was quoted by all Armenian and pro-Armenian media as allegedly "the voice of the entire Georgian opposition."

"The work of any demarcation commission will not be resumed and will continue until the armed forces of Azerbaijan leave the occupied, occupied, illegally held territory of Georgia David Gareja," Shalva Natelashvili said in a video posted on Facebook.

During the second Karabakh war, Shalva Natelashvili again began to try to raise a wave of tokophobia and Azerbaijanophobia in Georgia. He made provocative statements that the United States should deploy "nuclear and space" forces on the territory of Georgia, naturally against Turkey and Azerbaijan. Such nonsense was broadcasted with pleasure in Armenia.

The statements of Natelashvili and his Armenian sponsors are all lies. Investments and trade with Turkey and Azerbaijan bring nothing but benefit to Georgia, creating tens and hundreds of thousands of jobs, hindering emigration from Georgia. By the way, since we are talking about fertility, it is not least because of economic cooperation with neighboring countries in Georgia that the total fertility rate (2.06 children per woman) is the highest in the South Caucasus and practically does not differ from this indicator in Turkey (2.07). (http://www.demoscope.ru/weekly/app/asi_tfr.php). Therefore, the speculative hysterical screams of provocateurs like Natelashvili that they say “Turks and Azerbaijanis will breed Georgians” is time to forget. Unfortunately, all three peoples face similar problems of low birth rates (primarily due to urbanization and the spread of the "European" way of life), but it is impossible to say that the share of the Georgian population in Georgia is decreasing (this is evidenced at least by the census data)...

Shalva Natelashvili uses any pretext to insult people on the basis of ethnicity, incite ethnic hatred, primarily in relation to the Turks and Azerbaijanis. His attacks on Turkish and Azerbaijani businesses and investors inflict colossal damage on Georgia's investment image. In the modern world, "cross-penetration" of business and investment is common. Just as Turkish cafes and shops are opening in Georgian cities, cafes and restaurants of Georgian cuisine are also opening in Russia, Ukraine, and Azerbaijan. But no one will say that this is "Georgian expansion" and Georgian occupation. People come with their money, skills, abilities, create jobs, pay taxes. This is a normal civilized way of development and peaceful cooperation of states and peoples.