Russia should withdraw recognition of the "independence" of the Georgian regions. Abkhazia is Georgia! 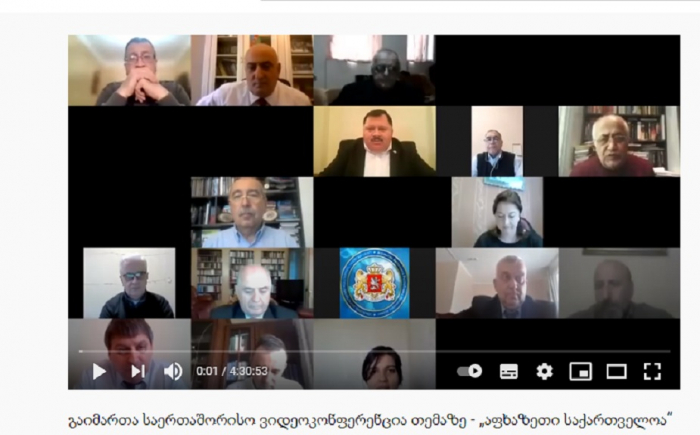 On April 11, 2021, at the initiative of the Caucasus International Center for the Study of Geohistory and Geopolitics, together with the Sukhumi State University, the International Conference "Abkhazia is Georgia" was held online.

At the same time, during the speeches, the conference participants published a lot of very interesting information about the history of separatism in the South Caucasus and the situation within the separatist formations.

In particular, the head of the Department of International Relations and Foreign Policy of the Academy of State Administration under the President of Azerbaijan, Doctor of Law, Professor Namik Aliyev recalled the danger of aggressive nationalism, which lies at the heart of separatism.

In particular, for the Armenian people, the so-called. “Armenians” is a complex of nationalist, racist and misanthropic ideas and myths that poisoned the soul of these people. As a result, when the process of separatism began in Nagorno-Karabakh, people heard the voice of the only Armenian who lived in Azerbaijan and opposed the separatist madness - Robert Arakelov. No other Armenian then objected to the nationalist-separatist hysteria.

But the fact that after the second Karabakh won a split occurred in the Armenian society and a part of the Armenians did not support the actions of aggressive nationalism and revanchism testifies that the improvement of the consciousness of the Armenian people is possible.

Unfortunately, the "plans" of the Armenian nationalists to build a "great Armenia" on foreign lands have not disappeared anywhere.

Some events of recent history and decisions of the same Russian authorities, which are incomprehensible from the point of view of political logic, are explained precisely from the point of view of the claims of Armenian nationalists to Georgian lands. So, according to Namik Aliyev, until now it was a big secret how Russia surrendered its protégé in Adjara, Aslan Abashidze, and why. The answer is simple: Aslan Abashidze during his entire reign did not allow Armenians to enter Ajaria, did not give them the opportunity to settle there. For which he was "punished". After Abashidze left his post, a stream of Armenians began to flow to Adjara under the guise of "tourism".

The Armenian lobby is doing everything to somehow "master" the section of the Black Sea coast between Batumi and separatist Abkhazia. Where the Armenians have already become the majority. They were massively settled in Abkhazia back in the years of the USSR, and Catholicos Vazgen even allocated up to 25 thousand rubles for one Armenian family for its settlement in Georgian Abkhazia.

The conference was also attended by the Director of the Institute of Caucasian Studies of the ANA, deputy of the Azerbaijani Parliament, Professor Musa Gasimli, and political scientist Araz Gurbanov, who unconditionally supported the restoration of the territorial integrity of Georgia.

Particularly interesting were the introductions of participants from Russia. The position of the Russian participants in the conference that the Kremlin's decision to recognize the "independence" of Abkhazia, etc. "South Ossetia" in August 2008 was called voluntaristic and fundamentally flawed. The audience was greeted with enthusiasm and the raising of the question on their part about the immediate withdrawal of the ill-fated (for Russia itself) "recognition" of the "independence" of the separate enclaves of Georgia.

In particular, according to the State Counselor of the first class, former head of the Office of the CIS and Baltic States of Roszarubezhtsentr under the Ministry of Foreign Affairs of the Russian Federation, Doctor of Political Sciences and Doctor of Historical Sciences Tatyana Poloskova, when the decision was made in the Russian Federation to recognize the so-called. "Independence" of Abkhazia and the so-called. "South Ossetia" Medvedev's team was not guided by the national and geopolitical interests of Russia. Today, there is already a conflict between the separatist authorities and Russia. The Abkhazian separatist authorities have not received any money from Russia since January. In the Russian Federation, this is already being written in the media - why should the Russian Federation maintain a territory where Russians are deprived of all rights with taxpayers' money? In response to this, the separatists say “you are obliged to give the money because we are your outpost” (the Armenian nationalists think similarly, demanding that Russia maintain Armenia).

According to Tatyana Poloskova, the Armenian diaspora, including Moscow, is also discussing the possibility of creating a “Gagrinsko-Sochi-Krasnodar” Armenian “republic”. Moreover, in separatist Abkhazia, especially in Gagra, practically all business is in the hands of Armenians. According to Poloskova, there are already precedents when the thief in law Tatulyan from Sochi "planted" his "presidents" in separatist Abkhazia (a hint of the current puppet separatist leader Bzhaniya, who especially goes "to bow" to Tatulyan)

Tatyana Poloskova believes that Russia is not needed in the current state of Abkhazia, the conflict between Moscow and the separatists in Sukhumi is reaching its climax and most likely there will be no resumption of funding for the separatists from Russia (Moscow does not want to show its political weakness). It is not excluded that Russia will refuse its presence in Abkhazia, which the Georgian leadership should take advantage of. Tatyana Poloskova is convinced that it is in Russia's interests to withdraw the recognition of the separatist Sukhumi and Tskhinvali.

Professor Oleg Kuznetsov (Russian Federation) noted the catastrophic state of infrastructure in separatist Abkhazia, in particular the power grids, which are all in disrepair. The catastrophe in other spheres on the separatist territory:

"We can now talk about Abkhazia, which has actually turned into a landfill for solid household waste from the territory of the Krasnodar Territory, and the export there is carried out using absolutely corrupt mechanisms and schemes, and when, in principle, people are ready to contaminate their own nature for material gain," he noted Oleg Kuznetsov. In his opinion, the Russian Federation needs to withdraw the recognition of the separatists.

The well-known political scientist Avraham Shmulevich (Israel) also believes that if recently the conflict over Abkhazia and Tskhinvali was considered "frozen", now the situation in the world has changed and a change in the status quo is quite possible. By analogy, Avraham Shmulevich noted that in the conflict in Karabakh they also believed that the situation was a dead end and that it would remain "forever", but now the Azerbaijani flag is raised over Shusha.

The conference was opened and chaired by the President of the Caucasus International Center for the Study of Geohistory and Geopolitics, Professor of the Sukhum State University Guram Markhulia.

The conference participants, against the background of recent events in Azerbaijan and the restoration of control over a large part of the territories of Nagorno-Karabakh occupied by Armenia, highlighted the Abkhaz problem in detail. All speakers unambiguously agreed that Abkhazia has historically always been a part of a single Georgian political-state and the ethnocultural world and any encroachment on the territorial integrity of Georgia, as well as other sovereign states - Ukraine, Moldova, is a gross violation of international law.

The "leading and guiding role" of the Russian Federation in inciting and supporting aggressive separatism in the post-Soviet space was emphasized. It was noted that the encouragement and even more overt military support for the protection of the "state sovereignty" of Abkhazia, etc. "South Ossetia", as well as other unrecognized entities (Transnistria, DPR, LPR), harmed Russia itself and caused enormous damage to its international authority.

The conference participants agreed to continue the discussion on topical issues of this issue.