Vahagn Chakhalyan and 'Javakh' separatists run for elections in Armenia 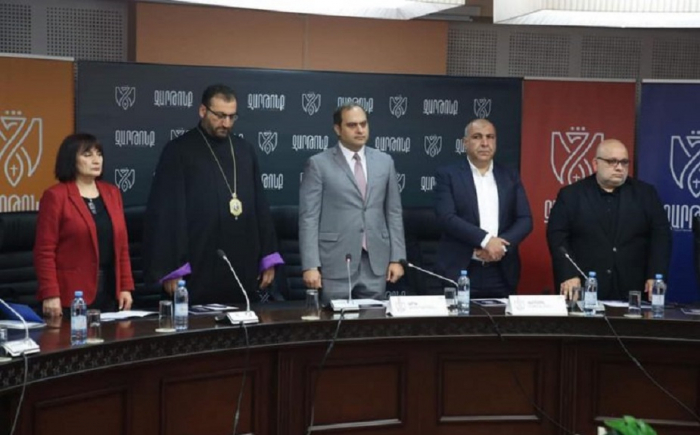 Early parliamentary elections in the Republic of Armenia can become crucial both for this state and for the entire region of the South Caucasus. The question is about the choice for Armenia - whether it will become a peaceful democratic state, cooperating with its neighbors and involved in regional economic projects, or will again rely on separatism and war.

Revanchists in Armenia until recently was represented by two main political forces. First, the "Karabakh clan" headed by ex-president Robert Kocharian, a fascist war criminal responsible for the genocide of the civilian population of Khojaly and other cities and villages of Azerbaijani Karabakh. Secondly, the outspoken terrorists Sasna Tsrer are also revanchists. Now, according to some polls, these political forces are the most popular among Armenian voters and each of them can gain up to 20% of the vote.

However, not all Armenians, even with intoxicated nationalism and obsessed with revenge, consider representatives of the Karabakh clan headed by Kocharyan to be acceptable to the extent that they are corrupted and "caught up". The memory of many Armenian citizens has not yet erased the arbitrariness and disregard for the rights and needs of people, which was demonstrated by the same Robert Kocharian and the outrageous corruption of the representatives of the "Karabakh clan", which against the background of impoverished Armenia was generally a blatant deed. No matter how much Kocharian promises an act of revenge with the help of Russia now, such voters will not vote for him.

“Sasna Tsrer” has definitely “smeared with blood” itself as insane terrorists who are capable of taking hostages and killing their own Armenian policemen for the sake of achieving political goals. Even for many Armenian nationalists, such figures are unacceptable.

Therefore, among the forces of revenge there is a demand for a more or less, at least outwardly, "decent" political force, which is not tainted in theft and corruption, and so far, in the blood of its fellow citizens. And today they began to rapidly form such a force for the upcoming parliamentary elections.

The forces of revenge are also well aware that this revenge, due to the territorial isolation of Armenia, is impossible without "breaking through the military corridor" through the territory of Georgia. Therefore, a special role in the revanchist plans is assigned to the Armenian "Javakhk" separatists, headed by the well-known extremist and militants Vahagn Chakhalyan.

Let us recall that Vahagn Chakhalyan organized the transfer of mercenaries from among the citizens of Georgia of Armenian nationality to participate in the aggression against Azerbaijan. Moreover, during the last Karabakh war, he personally commanded the units of "Javakhk" separatist mercenaries.

A significant part of these mercenaries was liquidated by the Azerbaijani army, but Vahagn Chakhalyan himself managed to escape from Karabakh. In Yerevan, Vahagn Chakhalyan launched a vigorous activity in defense of representatives of the "war party", in particular, he and his organization "Kamk" took part in actions in support of the "rebellious" leadership of the General Staff of the Armed Forces of Armenia.

For the party of war and revenge, there is an urgent need for a "decent face" at the head of their political association, which is not associated with either corruption or outright terrorism. Vahagn Chakhalyan and those who are behind him found such a "decent face" for their political force - this is the head of the Chamber of Lawyers of Armenia Ara Zohrabyan, who despite his profession is an ardent Armenian nationalist.

Ara Zohrabyan stated at a press conference in Yerevan that the so-called “Kamk” public organization founded by him and Vahagn Chakhalyan. “The National Christian Initiative“ Zartonk ”(“ Awakening ”) aims to participate in the early parliamentary elections. This initiative will soon be reformatted into a political force, the congress of which is scheduled for April 29, 2021.

Zohrabyan announced his readiness to cooperate with all political forces that share the Zartonk (Awakening) ideology. And this ideology is standard for Armenia - ultranationalism, non-recognition of the results of the second Karabakh war, the desire to expand "great Armenia", including at the expense of the Georgian lands.

Today, Vahagn Chakhalyan, together with the head of the Armenian Chamber of Lawyers Ara Zohrabyan, form and "politically formalize" a revanchist force, formally distancing itself from both the "Karabakh clan" and completely insane terrorists "Sasna Tsrer" in order to gain as many votes as possible in the upcoming early parliamentary elections and join the ruling coalition. In the opinion of Armenian political experts, if funds are invested in the "promotion" of this political force, then they may well gain up to 15% of the votes. All in all, following the results of the early parliamentary elections, revanchists: "Kocharyanites", Sasna Tsrer, and the Zohrabyan-Chakhalyan project can collectively gain more than 50% of the votes and form a government coalition.

This is a direct path to unleashing a new "big war" in the South Caucasus, into which, firstly, they will try to drag Russia, and secondly, with the help of the "Javakhk" separatists, they will try to organize a "military corridor" through Georgian territory.

The dangers of such a scenario cannot be underestimated. Moreover, now, for example, the Russian military vehicle has already been put on high alert. While she was "preparing for war" on the borders of Ukraine. But a scenario cannot be ruled out when the Armenian lobby and Armenian revenge-seekers will try to “reorient” this military machine to the South Caucasus in order to again try to conquer lands for “Great Armenia” with Russian weapons.