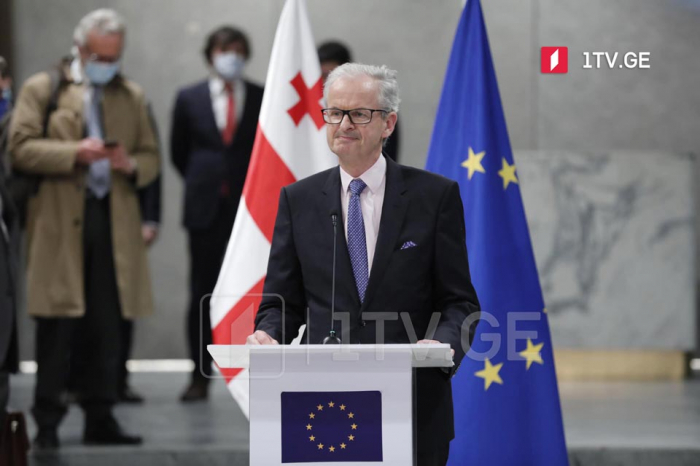 The undersigned parties, taking into account shared interest to end the current political dispute and advance Georgia’s democratic and rule of law agenda through political, judicial, and anti-corruption reforms.

Parties should commit the following elements:

In the interest of Georgia’s political stability and in order to implement this agreement, the signatories commit to address the two cases of perceived politicized justice. In particular, within one week of signature of the agreement, a party represented in Parliament shall initiate an amnesty law for all violations and convictions stemming from the 19-21 June 2019 protests.
Moreover, Parliament shall address the perception of politicized justice through legislation and amending the Rules of Procedure as necessary, to require a higher than simple majority threshold for the lifting of parliamentary immunity.
2. Ambitious electoral reform

All future parliamentary elections shall be fully proportional. The next two parliamentary elections shall have a threshold between natural and 2%.
A grouping of at least 4 Members of Parliament shall be allowed to form a parliamentary faction to which MPs of other parties can be included.
The parties shall support the bill tabled in Parliament on 2 March, with the following complementary or modifying amendments:
Local elections: a 4/1 ratio of proportional and majoritarian mandates for the 5 largest cities and 2/1 for all others; thresholds shall be 2.5% in Tbilisi and 3% everywhere else.
Central Election Commission: 8 professional members and 9 political party members. Professional members appointed by two-thirds majority of the Parliament’s full composition. One of the political party members representing an opposition party shall be Deputy Chairperson.
District Election Commissions: same proportions and two-thirds majority in CEC on professional members’ appointment.
Precinct Election Commissions: same proportions subject to a parliamentary discussion on feasibility. Professional members appointed by simple majority plus one vote in DECs. PEC Protocols to be signed by at least 5 professional members plus one political party member.
CEC Chair shall be elected by two-thirds majority of the Members of Parliament.
Clear criteria for the recounts of ballots shall be defined. The automatic 10% recount of all precincts on a random basis remains.
A special task force shall be set up under the CEC’s mandate to include Public Defender’s
Office and invite credible non-partisan election observer organisations, as well as trusted invited domestic and international experts, to review the dispute resolution process and provide timely recommendations to the CEC. The task force may be given additional functions such as involvement in recounts.
In line with the Venice Commission and OSCE/ODIHR Joint Opinions of 20 March 2021, related to two draft laws tabled in January 2021 to amend provisions on party registration and on party financing, the adoption of the proposed amendments shall be reconsidered.
3. Rule of Law/Judicial Reform

Parliament shall adopt ambitious judicial reform in this Parliamentary term, including the following, as the first step in a broad, inclusive, and cross-party reform process.

To increase the independence, accountability, and quality of the judicial system, the Georgian authorities will, in line with two packages of judicial reforms adopted in 2017 and 2019:
further enhance transparency and merit-based selections in the appointment of judges to the first instance and appeal courts, notably by publishing written justifications for appointments of judges with reference to integrity and competence criteria;
submit to the Parliament draft legislation on the appointments to the Supreme Court in line with the related Venice Commission opinion No. 949/2019 of 24 June 2019, notably as concerns the staggered approach to appointments, open voting in the High Council of Justice, and the need for the latter to justify the nominations;
refrain from making appointments to the Supreme Court under existing rules;
adopt the legislation implementing the ruling of the Constitutional Court of Georgia from June 2019 by setting rules for the publication of judicial decisions.
In the meantime, as regards the Supreme Court, all ongoing appointments shall be paused and the application process shall be reopened, including to new candidates, once the new legislation have entered into force.
Substantive reform of the High Council of Justice to increase transparency, integrity, and accountability, including in appointments, appraisals, promotions, transfers, disciplinary measures, and appeals shall be drawn up, submitted to the Venice Commission and the OSCE/ODIHR for an opinion and their recommendations shall be fully implemented.
As regards future Prosecutors General, following necessary procedures for constitutional revision, including a public debate, the parties commit to pursuing a shared political position that a vote of a qualified majority of the Members of Parliament, ensuring the broadest, cross-party political support, shall be required for the appointment of the next Prosecutors General and to align these appointments with international best practices to ensure appointments are made in a transparent, non-partisan manner, based on merits.
The parties commit to further judicial reform through an inclusive process, including an assessment of the effectiveness of the 3rd and 4th waves of judicial reform. International advice and support will be sought for implementation of these reforms, in particular as regards the integrity of appointees.
4. Power Sharing in the Parliament

Opposition MPs shall be assigned 5 committee chairmanships, 2 of which shall be among the following five committees, Committee on Procedural Issues and Rules; Committee on Legal Issues; Human Rights Committee; Budget and Finance Committee, and Foreign Relations Committee;
Opposition MPs shall be assigned the position of 1 chairmanship among the following Parliament delegations to international fora: Euronest PA, EU-Georgia Parliamentary Association Committee, Parliamentary Assembly of the Council of Europe, and the OSCE PA.
Other positions shall be assigned in the future using a more inclusive formula such as the D’Hondt rule.
The parties shall seek to establish a Jean Monnet Dialogue with the European Parliament.
5. Future elections

The parties take note of the assessment by the OSCE ODIHR, according to which “the 31 October parliamentary elections were competitive and, overall, fundamental freedoms were respected. Nevertheless, pervasive allegations of pressure on voters and blurring of the line between the ruling party and the state reduced public confidence in some aspects of the process. (…) The systemic rejection of the majority of complaints on formalistic grounds, significantly limited the opportunity to seek effective legal remedy.”

The parties acknowledge their differing assessment of the 2020 elections and agree to take up their parliamentary mandates and participate in future elections on the basis of the electoral reform agreed here above, in the interest of Georgia’s political stability and in order to implement this agreement.

An International Observation Mission shall be requested by the Georgian authorities for the October 2021 local elections.

Georgian opposition parties that won seats in the Georgian Parliament of the 10th Convocation believe the 2020 parliamentary elections were a fraud. They have been demanding repeat parliamentary elections and the release of the United National Movement Chair, Nika Melia, and the co-founder of the TV channel Mtavari Arkhi Giorgi Rurua.