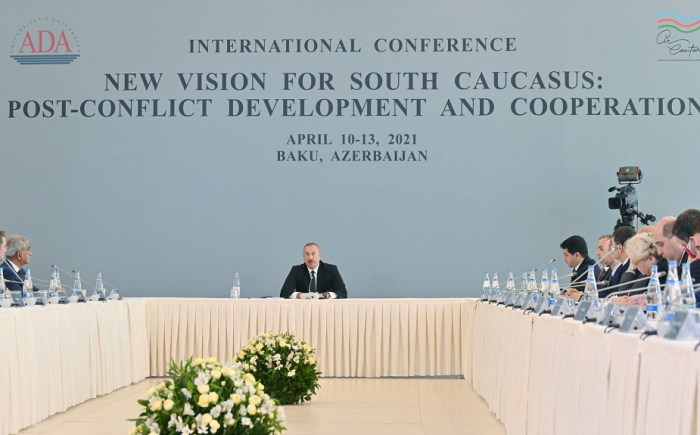 On April 13, President of the Republic of Azerbaijan Ilham Aliyev took part in an international conference held at ADA University entitled "A New Look at the South Caucasus: Post-Conflict Development and Cooperation." The conference with the participation of representatives of the world's leading think tanks was opened by the rector of ADA University, Ambassador Hafiz Pashayev.

It would seem those sane thoughts in Armenia would have to seize on this proposal and gradually lead Armenia out of the deepest crisis that was a consequence of the policy of Armenian nationalists - aggression against neighboring countries and the seizure of foreign lands, a policy full of hatred towards neighbors. However, all the same in Armenia there are speeches full of misanthropy, azerbaijanophobia and turkophobia.

President Ilham Aliyev told the guests about the situation, post-war processes, and opportunities for regional cooperation. According to the President of Azerbaijan, the war is over, Azerbaijan has regained the occupied territories, and now the time has come for regional cooperation. According to Ilham Aliyev, if Armenia is ready for cooperation, all countries of the region will benefit from this.

One of the conference participants, Michael Reynolds, noted in his speech that the Armenians with their irrational approach, making territorial claims not only to Azerbaijan but also to Turkey, have led to today's catastrophe. (Ed. - we will add that these territorial claims are also directed against Georgia).

In addition, the President of Azerbaijan was asked about regional cooperation, including in the 3 + 3 format, which implies, on the one hand, cooperation between Turkey, Russia, and Iran, and on the other hand, direct cooperation between Azerbaijan and Georgia, Armenia. Commenting on the topic, Aliyev said that he would discuss this issue with the Prime Minister of Georgia during his next visit to Baku.

Former US ambassador to Azerbaijan and ex-co-chair of the OSCE Minsk Group Matthew Bryza is sure that ex-President of Armenia Robert Kocharian, who has returned to big politics, can finally push his country into the abyss if he comes to power again. According to the American diplomat, the idea of ​​revanchism will undoubtedly play a cruel joke with Yerevan.

Matthew Bryza said that in the fall of 2020, Azerbaijan waged a just war for the liberation of its territories from the Armenian occupation. The American diplomat emphasized that Azerbaijani President Ilham Aliyev has repeatedly stated that the Armenians living in Karabakh can stay and live here together in conditions of good neighborliness and peace with the Azerbaijanis returning to the liberated lands.