'Iskander' or the terrible spy echo of the Karabakh war 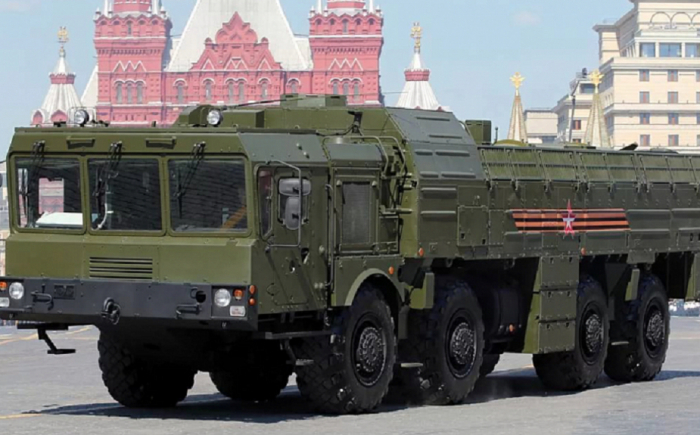 The latest scandal with the Iskanders in service with the RF Armed Forces, which apparently were used without the sanctions of the top political leadership during the last Karabakh war, the corrupt Russian military associated with the Armenian lobby sharply raises the question of the need to “decisively cleanse” the leadership of the defense department of the nuclear power from outright traitors and saboteurs. "Werewolves in uniform" - if they continue to be given the opportunity to use deadly weapons "at the request" of Armenian or some other dubious "friends" can destroy Russia and lead the world to a nuclear catastrophe.

Therefore, it is no coincidence that the site "Big Asia" published the material of Alexander Artamonov "Iskander" or the terrible spy echo of the Karabakh war "(https://bigasia.ru/content/pub/review/iskander-ili-strashnoe-shpionskoe-ekho-karabakhskoy- voyny/) dedicated to this issue:

Debris of Iskander missile was found in Shusha, Azerbaijan on March 15.

In addition to the very fact of using heavy weapons against a peaceful city, it is important that the wreckage found allegedly belongs to the Iskander-M system, and not the Iskander-E system, which was delivered in 2016, that is, long before the 44-day war. Armenia. So let's figure out who shot. Or maybe the missile was specially planted with broken numbers in order to provoke a conflict between Moscow and Baku?

Iskander-M is a Russian missile with a range of up to 500 km. Introduced into service in 2004. Developed by the Kolomna Design Bureau "Mashinostroenie". The radius of destruction of the export version is approximately 2 times lower (280 km). Iskander-M is capable of hitting targets with an accuracy of up to 2 m. The export version of the installation is with an accuracy of about 20 m. In addition, Iskander-M is “charged” with two missiles, and the modification for foreign countries - with one.

“As a result of recent studies, it turned out that this is an Iskander-M missile,” said Idris Ismayilov, head of the ANAMA (Azerbaijan Mine Action Agency) operational headquarters. The rocket has the following index - code-index 9M723. At first, the Azerbaijani military decided that there was a cheap provocation with an attempt to destabilize the friendly relations between Moscow and Baku.

But the truth turned out to be much worse. As Russian investigators found out (the case materials are already widely quoted and discussed by the Russian and Azerbaijani media), long-range combat missiles, categorically prohibited for export, were sold by a criminal group from warehouses to suppliers who immediately sent their catch to Armenia.

According to the most likely version, an Il-76 transport aircraft was even specially purchased for the criminal act, with the help of which the criminal transshipment of goods was carried out. In connection with the heightened danger of such scams and urgent order from the leadership, the case was actually investigated literally in a few days by the joint efforts of the employees of the Russian Ministry of Defense and the Russian FSB.

It seems that the activities of the criminals were carried out through ethnic groups and were put on a grand scale. The journalists managed to find out that the materials featured various shopping centers, shops, and even construction offices located in all parts of our boundless Motherland - in Moscow, St. Petersburg, Khabarovsk, Oryol, and Tula regions, Krasnoyarsk and Krasnodar...

Theft and criminal sale of missiles are out of the ordinary. But even worse is the existence of an underground transportation network within the country and abroad. In fact, we are talking about the activities of foreign intelligence on the territory of Russia. Moreover, the beneficiary, in this case, is Yerevan.

By a happy coincidence, the weapons illegally acquired and delivered to the addressee were actually not used and turned out to be ineffective. This was due to the foresight of the Russian military. The fact is that no "instructions for use" are contained in military warehouses. That is, taking a rocket and being able to use it is, as they say, one big difference.

Any modern weapon is a complex high-tech system, far from a simple computer shooter. The use of such technology implies, in fact, engineering knowledge, which the foreign military does not often possess. Moreover, if we are talking about a rather technically unadvanced Armenia. Therefore, the principle of “fire and forget” could not work in any way when using Iskander-M. Do not forget that they tried to use them on rugged, mountainous terrain, in the conditions of a real clash and the probable use of electronic warfare systems by the Azerbaijani side. We can only rejoice at the fact that the principle of "drag what lies badly" did not work and that there were no casualties from the use of Iskanedra-M. That, of course, will not prevent Russian investigators from brutally punishing the "werewolves in uniform."

What would Comrade Xi Jinping say?

And this is really good news for Russia. But also for Azerbaijan, which helped Russia to deal with the difficult situation and, thereby, only confirmed the friendly and partner relations between the two Eurasian states. And with trust, many problems can be dealt with. Suffice it to recall the assistance that Vladimir Putin provided to Recep Erdogan at the time of the military conspiracy against the Turkish president, set up by the United States in order to overthrow the legitimate government in Ankara.

Now there is a long and painstaking work - monstrous in its scope - to identify and purge not only in the ranks of the armed forces but also in a number of civilian organizations that could be involved in the criminal circulation of weapons. In this regard, I would like to recommend to Russian legislators to amend the laws "according to the Chinese version." After all, it is well known how categorically, just according to the laws of wartime, they are judged for such cases in the Celestial Empire. However, in the PRC, even for simple corruption, execution is often imposed. Perhaps that is why China has remained China for more than one thousand years."