Pozner continues his provocations: an interview with the criminal Kocharyan and an "announcement" of a future war in the South Caucasus 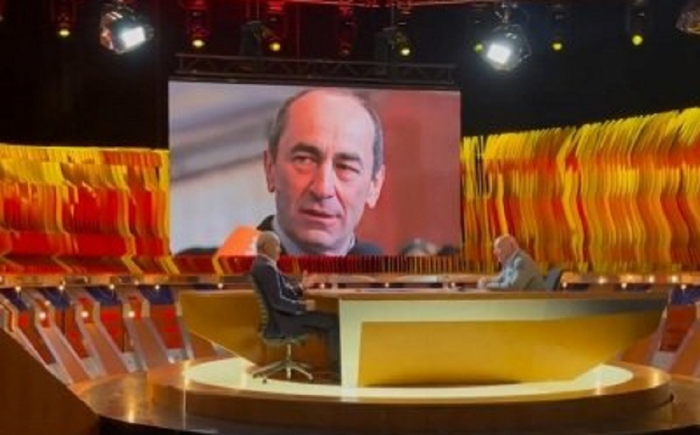 The behavior of Vladimir Pozner, expelled by indignant citizens from Georgia, a great friend of separatists and Armenian nationalists, will allow us to conclude that his trip to Georgia, provocatively furnished, was not accidental, and his birthday was just an excuse. Barely returning to Moscow, Vladimir Pozner recorded an interview with the former separatist president of the so-called. "NKR", the second President of the Republic of Armenia Robert Kocharyan, a war criminal and executioner of Khojaly.

It is very symbolic that Pozner posted his interview with Kocharian at the very moment when the international resonance was received by the scandal with the use of Iskander-M missiles by the Armenian side during the second Karabakh war. The drive for destabilization that people like Posner or those behind them want is more than obvious.

Kocharian's appearance in Moscow on the eve of the start of the campaign for elections to the parliament of the Republic of Armenia is a clear signal that certain forces in the Kremlin are betting on Kocharyan. What forces are not difficult to guess. After all, “at the request of the Armenian lobby,” the dependent part of the Russian political and military elite forced their soldiers to fight in Karabakh and Abkhazia for separatists and Armenian nationalists, carried out aggression against Georgia in August 2008. And obviously at the suggestion, if not of these the same, but persons close to them were used "Iskander-M" against Azerbaijan during the Second Karabakh war.

The most interesting thing is that when asked about the possibility of revenge, Robert Kocharyan, admitting that Armenia itself does not have the strength for revenge now, called the results of the last Karabakh war “unfair”. This is a hint that a warlike him will incite. And what forces will be involved in this war, Kocharyan also hardly hides. For example, he "boasted" that by the time he became the so-called. The so-called "president" "NKR" Armenian bandit formations controlled only 50% of the territory of the former NKAR of Azerbaijan. Well, as a result of Kocharyan's "cooperation" with the corrupt Russian military, the Armenians managed to put under control, in addition to the territory of the NKAO, another 7 regions surrounding it.

The hint is more than clear. "I will come to power and again, with the help of the Russian military, I will" recapture "the territory." Well, how can we transfer Russian troops to help the Armenian revenge-seekers? The answer also suggests itself - through Georgia. Otherwise, Russian troops in sufficient numbers simply cannot penetrate the theater of military operations in Karabakh.

Therefore, from this point of view, Posner's provocative trip to Tbilisi looks not at all accidental. It turns out that Vladimir Pozner is "serving" Robert Kocharian - to incite a new war in the South Caucasus. A negative image of Georgia is created in advance among the Russian public. So that at "moment X" the Russian military machine, sweeping away the Georgian statehood, would rush to fight for the delusional plans of the Armenian revanchists - the same fascist Robert Kocharyan.