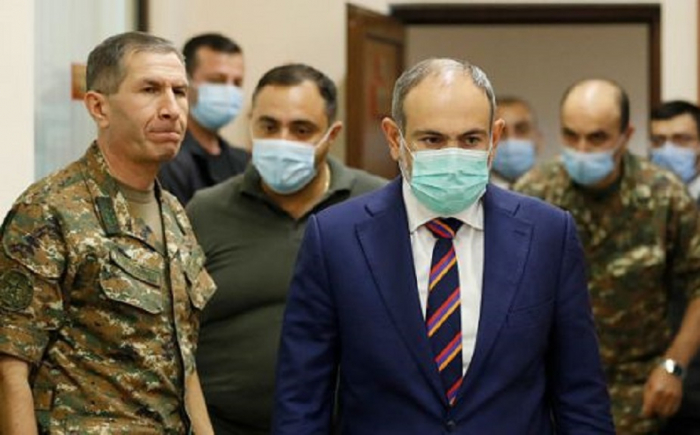 On February 25, Chief of the General Staff of the Armenian Armed Forces Onik Gasparyan demanded the immediate resignation of Prime Minister Nikol Pashinyan and his government. The reason was the dismissal of the first deputy chief of the general staff Tigran Khachatryan. According to Gasparyan, Pashinyan and the Armenian government "are not in a position to make adequate decisions."

In response, Armenian Prime Minister Nikol Pashinyan announced an attempted military coup in the country on the air and urged his supporters to come to the main square of Yerevan.

The attempted military coup in Armenia took place against the backdrop of a new sharp aggravation of relations between Pashinyan and the Kremlin, the apotheosis of which was the criticism of the Armenian prime minister about the Russian Iskander missile systems.
“Do not tell our Iskanders” - such as the saying “Hurray for patriots” in Russia, which was made clear that the military power of the Russian Federation (including the famous “Iskander”) was capable of giving an answer to any actions of its opponents or opponents of its “allies” ". True, the Russian Federation is frankly "not a lot" with "allies", even if we attribute to them the puppet separatist regimes, including in the still occupied Georgian Sukhumi and Tskhinvali.

And now a blow would be struck at the "prestige of the Iskander". In response to the words of former Armenian President Serzh Sargsyan that Yerevan could use missile systems on the fourth day of the war in Karabakh, in an interview with 1in.am, Prime Minister Nikol Pashinyan said that “Iskanders” during the conflict in Nagorno-Karabakh in autumn 2020 “ did not explode or exploded by only 10 percent. "

The international community perceived the statement about the low efficiency of the Russian Iskander missile systems as a "resounding slap in the face" to the entire Russian military-industrial complex, moreover, from the leader of the country, which is considered an "ally". As a result, it is no coincidence that after this Pashinyan was called "an enemy and a traitor" in the Russian Federation.

Such an aggravation between Prime Minister Pashinyan and the Kremlin was to be expected. It is no secret that the Kremlin has begun to rely on bankrupt politicians from the Karabakh clan, in particular on the aged murderer and executioner of Khojaly Robert Kocharyan. Also, many political analysts in Armenia itself began to say that it is quite possible that the military may make speeches in order to bring Kocharyan and his clique back to power.

The aggravation of the confrontation between Nikol Pashinyan and the military who retained a pro-Russian position was expected. Moreover, after the "Maidan" revolution of 2018 and his coming to power, Pashinyan was unable to clear the general staff of supporters of the previous regime. For a simple reason: he did not have enough of his own staff. Whatever the Armenian nationalists would say about Pashinyan as a "traitor", he did not want to reduce the combat effectiveness of his army, replacing, as it seemed to him, "talented" officers of the general staff.

However, the General Staff of the Armed Forces of Armenia personally showed its "talent", or rather the absolute mediocrity, in the second Karabakh war. And this is not surprising at all. After all, it is one thing to engage in ethnic cleansing and genocide of the civilian population, behind the backs of the Russian military "privatized" in the Armenian interests, and another thing to wage a modern war ourselves.

So, in the war, the general staff of the armed forces of Armenia not only completely went bankrupt but also questioned the military competence of the general staff of allied Russia. International military experts began to rightly ask questions: if the leadership of the Armenian General Staff is so mediocre, are their "allied" ranks in the General Staff of the Russian Armed Forces much smarter?

At the same time, the General Staff of the Armed Forces of Armenia could not really prepare even a military putsch. What kind of putsch is this if almost every dog ​​from the gateway knows that it is being prepared? Therefore, it can even be assumed that Pashinyan decided to launch a "preemptive strike" and deliberately spoke about the Russian "Iskander". After that, according to all logic, a "purge" of those who were responsible for the supply of "Iskander" to the Armenian Armed Forces from the Armenian side, primarily the officials of the General Staff, should have begun.

Thus, Pashinyan, in fact, by his actions "put under collapse" the carefully created structure of plans for a conspiracy against him and against the peace accords on Karabakh and against peace in general in the South Caucasus. The plans were as follows: during the putsch in Yerevan, Kocharian comes and the pro-Russian military immediately unleashes a revanchist war in Karabakh. And to help them through Georgia (where the Armenian forces, taking advantage of the political instability, are organizing chaos) comes the "allied" Russian army.

An adventurous plan - once it was entrusted to such insignificant and narrow-minded people in Armenia. And "easily miscalculated." Therefore, it is natural that after Pashinyan questioned the "defense achievement" of the Russian military-industrial complex, he began to purge the General Staff. Moreover, at first, he fired the deputy of the general staff, provoking the head of the general staff into an early rebellion.

And further, what is happening now in front of our eyes in Armenia is in fact the suppression of the military putsch, which had, if not for the "false start" and Pashinyan's preventive actions, all chances of success. Do the putschists and the Russian Federation behind them have a chance now? This will be seen in the coming days. But their actions are hysterical and inconsistent. Perhaps this is the last hysterical "laughter of the Iskander" in the South Caucasus.