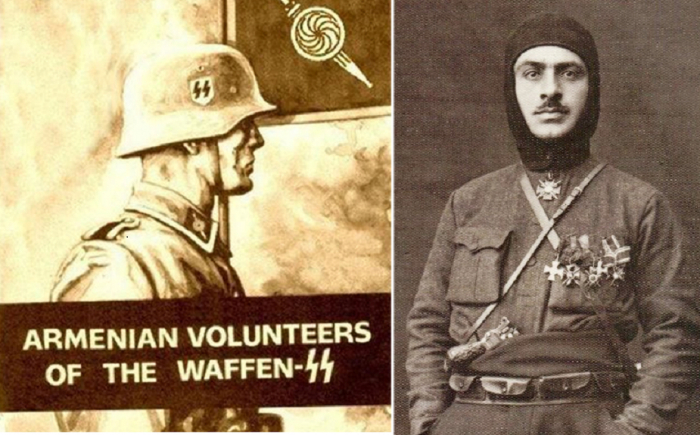 Calling on Russia for help, trying in every possible way to entice Russians into their aggressive wars against neighbors, Armenian nationalists at the same time do not even think to hide their neo-fascist and neo-Nazi essence. They do not hesitate to glorify the Nazis, in particular the Hitlerite accomplice Garegin Nzhdeh, who has become the "main national hero." And at the same time, they destroy and desecrate the monuments to the real heroes of the Great Patriotic War, who gave their lives for the victory over fascism.

This is especially striking in the territories of Azerbaijan, which were under Armenian occupation. 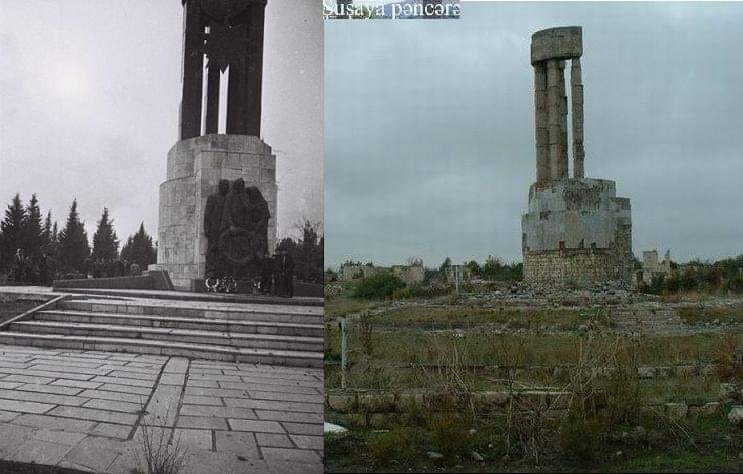 Aghdam city. Monument to the veterans of the Great Patriotic War of 1941-1945 After the occupation of the city by the Armenian Armed Forces, the monument was destroyed. Photos taken before and after the Armenian occupation: 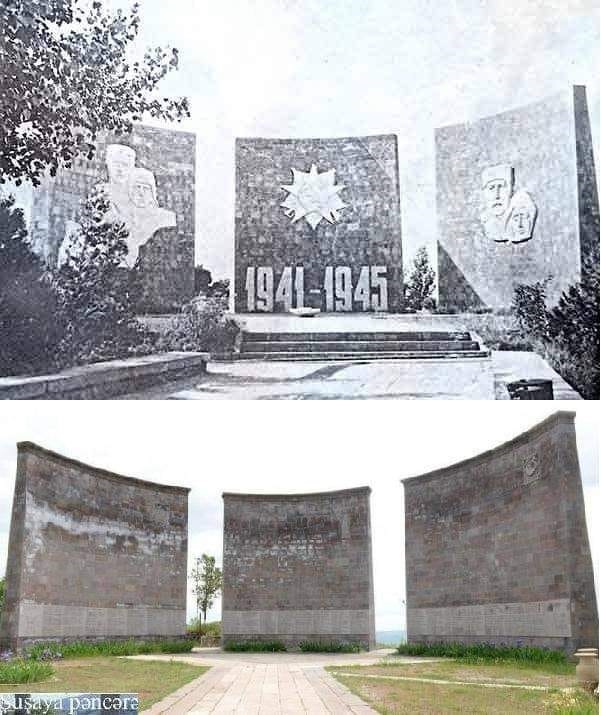 Everyone knows that among the Armenian terrorists who came to seize the Azerbaijani lands, the majority are neo-Nazis and admirers of Hitler's "racial theory" glorifying the "Aryans" to whom they consider themselves. Is it worth it after that to be surprised at the monstrous crimes of these bandits, such as the genocide in Khojaly?

Moreover, all Armenian nationalists, admirers of the Nazi executioner Garegin Nzhdeh, to whom Armenian separatists erect pompous monuments throughout Armenia and even in Azerbaijani Nagorno-Karabakh, hiding behind the backs of Russian peacekeepers.

At the same time, rabid anti-Semitism is being inflated in Armenia. Recently, for the umpteenth time, a monument to the victims of the Holocaust was desecrated in Yerevan. All this suggests that Nazism is progressing in this state. After all, Armenian nationalism not only justifies, but also “heroizes” the murder of those whom its ideologists attributed to “enemies of the Armenian people”. Therefore, the killers of Turkish diplomats, for example, are considered “heroes” in Armenia, which means that Nazism in Armenia can lead not only to the installation of some monuments and desecration of others, but also to much more bloody consequences.

It all starts with symbols. Desecrating the monument to the heroes of the war against Nazism and the victims of the Holocaust and at the same time erecting a monument to their executioner is just a symbolic symbol. Especially if the crimes of the murderers and executioners are "justified" by completely wild anti-historical myths. Let us recall that the Nazis of Germany also began their inhuman crimes with myths and symbols.

In addition, the key to the formation of German Nazism was the idea of ​​revanchism. The Germans were taught that they were a “great people”, and in the past “were always great”, but during the First World War they were defeated, and now they need to take revenge and “punish” those who were to blame for such a defeat.

Moreover, one of the main "enemies" was indicated by the Nazis at once - "insidious" Jews. It is they who, if you listen to Nazi propaganda, prevented you from winning the war, creating a "great Germany" and it is the Jews, they say, who constantly plot against the "Aryans". Revanchism, historical myth-making and anti-Semitism went hand in hand in Nazi Germany.

It's a paradox, but after Nazism was condemned by the Nuremberg Tribunal, a state appeared that copies the "Third Reich" in a "dwarf format" down to the smallest detail, but at the same time no less bloodthirsty. This is the Republic of Armenia, where the outrageous Nazi racism, developed by Hitler's accomplice Garegin Nzhdeh, is accepted as the "official" ideology.

The very acquisition of independence of Armenia was accompanied by the wildest ethnic cleansing, as a result of which it became the most mono-national state on the planet Earth - 99% of its population were ethnic Armenians. All, without exception, the indigenous inhabitants of the territory where the Republic of Armenia is located - Azerbaijanis, Muslim Kurds were ruthlessly expelled from their homes, many were killed.

And it is symbolic that among the Jews, the people who survived the Holocaust, who suffered the most from Nazism, among the leading politicians of the State of Israel, there is an understanding of the danger posed by Armenian neo-Nazism. It is no coincidence that Israeli President Reuven Rivlin spoke at the UN General Assembly and compared the Khojaly genocide with the Holocaust.

Apparently, the President of Israel is well aware that both crimes have the same basis, and if they are not resolutely condemned and the perpetrators are not punished, then such crimes can lead to an even greater catastrophe.

Unfortunately, in Russia, those who shape public opinion do not understand this. The propagandists who fell under the influence of the Armenian lobby, such as Soloviev, did not “notice” the danger of Armenian Nazism. As a result, many people in the Russian Federation still do not understand that how the Nazi Nzhdeh killed Russians and Jews, how Armenian terrorists blew up Russians in the metro in 1977, they can also start their inhuman crimes again at any time and in any place - only they will have the opportunity to do so.

In order to prevent the repetition of the Khojaly tragedy or the Holocaust tragedy on one scale or another, it is necessary to eliminate once and for all the center of Nazism in the Republic of Armenia, for the sake of the good of the Armenian people, who became hostage to the Nazis and misanthropists. The issue of the denazification of the Armenian state, its rejection of revanchism, and integration into joint economic projects with its neighbors should be raised by Russia, a country on which Armenia's existence still completely depends.