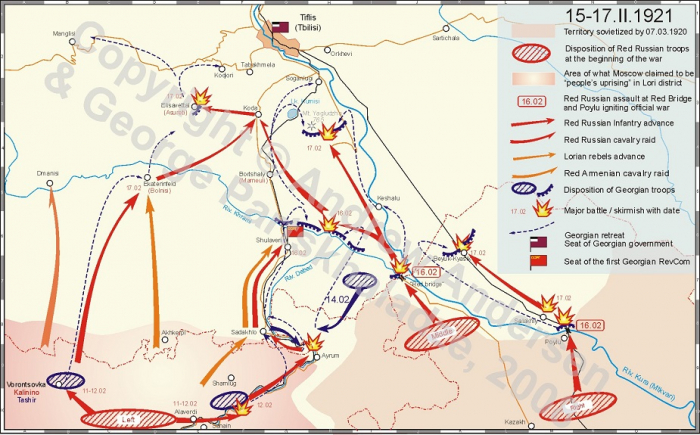 This map shows the beginning of the Soviet Russian aggression against Georgia, which took place 100 years ago. The map shows the defensive positions of the Georgian army in blue, and the location and strikes of the Red Army in red.

But the map also shows yellow and orange arrows. And the signatures were given: these are "Lori rebels" (without exception - Armenian Dashnaks, "repainted" as Bolsheviks) and "Armenian red cavalry".

That is, to put it simply, 100 years ago, “Christian brothers, Armenians” once again in their history supported the occupation of Georgia. Moreover, documents have been preserved where Armenian nationalists not only do not try to somehow dissociate themselves from this fact but also, on the contrary, in every possible way emphasize their role in the Bolshevik seizure of Georgia.

“Between Menshevik Georgia and Sovietized Armenia, a“ neutral zone ”was formed, occupied by the troops of the Georgian Mensheviks, who declared Lori“ an integral part of Georgia ”. An armed uprising was being prepared against them. The main leadership of the rebels was entrusted to the new head of the political department of the Red Army of Armenia, Joseph Lazyan. On the basis of the decision of the Caucasian Bureau of the Central Committee of the RCP (b) for the preparation of an armed uprising in Lori, the Central Committee of the Communist Party of Armenia on December 20, 1920, issued a decree on the establishment of the Rebel Headquarters in Karaklis (now - Vanadzor). At the request of Lazyan, a large group of commanders and political workers from the First Armenian Brigade of the Red Army was selected and sent to Karaklis, who later played an invaluable role in organizing and successfully conducting the military operation. The headquarters for preparing the uprising included General Osipyan, Tigran Aniev, S. Shorokhov, and I. Lazyan as leaders. Upon arrival in Karaklis, the headquarters launched active operations. At first, the rebels got rid of the Georgian consul and a whole pack of suspicious persons, the corrupt railway militia was replaced by a commandant's office (commandant - A. Sahakyan) with a border guard team. In the process of the February armed uprising of 1921, I. Lazyan developed and implemented an action plan to prevent the blowing up of the Shagalin railway bridge, mined by Georgians in order to cut off communications to the Armenian Republic from the north. The result of the successful actions of the rebels was the incorporation of the primordial Armenian land Lori into Armenia. For his successful leadership in the implementation of the uprising I. Lazyan was the first in Armenia to be awarded the Order of the Red Banner of the Central Executive Committee of the RSFSR."

Meanwhile, Joseph Lazyan was born in Samtskhe-Javkheti, in the Georgian city of Akhaltsikhe. And he "thanked" both Georgia and the Georgian people for giving shelter to their ancestors on their land.

“December 3, 1921
In the Caucasian Bureau of the Central Committee of the RCP (b)
ABOUT THE REBELLION IN THE NEUTRAL ZONE BETWEEN GEORGIA AND ARMENIA IN FEBRUARY 1921
Report of the responsible organizer and leader of the uprising I. Laziyan
Having survived several forms of government, this zone, after the Kemalist attack on Armenia and the Sovietization of the latter, was occupied by the troops of Menshevik Georgia. But this occupation also extended to part of the undisputed territory of Armenia.
... when Armrevkom sent diplomatic notes of protest to the Georgian government regarding the indicated policy of the Mensheviks and the illegal seizure of the zone, the population of the Neutral Zone was preparing itself, through revolutionary action, to put an end to the yoke of the Georgian invaders and proclaim Soviet power.
Bolshevik tendencies among the population of the zone especially intensified after the Sovietization of Armenia. From that time on, the entire zone was quickly covered with a dense network of underground organizations of our party and revolutionary committees.
Under the leadership of these local organizers of the zone, its population, through their representatives, incessantly began to turn for help both to our higher party bodies and to representatives of the XI Red Army and Soviet power in Armenia. On the initiative of comrades. Ordzhonikidze and Legrand decided to organize the uprising in the zone under the direct leadership of the Central Committee of the CP (b) of Armenia. For this purpose, on December 20, at the suggestion of Comrade Legrand, the Central Committee of the Communist Party (Bolsheviks) of Armenia sends several military workers headed by the communist Hasratyan (A. Alabyan, A. Stepanyan, S. Pirumov, Bengliyan, etc.) to the zone; three days later, also at the insistence of Comrade Legrand, the Central Committee of the CP (b) of Armenia decides to send me to manage the organization of the uprising in the Neutral Zone.
Having received general directives from the Central Committee of the Communist Party (Bolsheviks) of Armenia and Comrade Legrand, having selected a group of workers for myself, I prepared for the fulfillment of my task. My first duty was to set up a rebel conspiratorial headquarters.
Almost all our underground organizations defeated by the Mensheviks in the zone were quickly restored, they again armed the disarmed peasants, organized new detachments both in the zone and outside it, from the fugitives who fled from the zone during the period of Menshevik repression ...
As a result of a three-day heroic struggle, the entire Neutral Zone was cleared  7,000-strong Menshevik occupation army. The rebels captured about 3,000 people and many officers. 40 machine guns and two serviceable mountain guns were captured."

The Armenian edition of "Noah's Ark" also wrote about Lazyan in detail in the material "JOSEPH LAZYAN - ORGANIZER AND LEADER OF THE LORIYA UPRISING, RESPONSIBLE EDITOR OF THE NEWSPAPERS" EVENING MOSCOW "AND" RABOCHAYA MOSCOW "https://noev- /6403.html). A curious episode is described there:

“After counting the captured trophies, the leader of the rebels Lazyan telegraphed the chairman of the Revolutionary Committee of Armenia - S. Kasyan:“ The Red rebels are sending the workers of Armenia from the captured trophies their first gift - 2 steam locomotives, kerosene tanks, 7 bags of tea, warm linen, agricultural implements”.

In general, the passion for capturing trophies, as well as the pathological tendency to betray Georgia among the nationalists of the "ancient long-suffering people" was back in 1921. In 1992-1993. The same qualities manifested themselves in Abkhazia, where the militants of the Baghramyan battalion got even richer "trophies" - the houses and apartments of the Georgians killed and expelled by them.

But in the end, "the award found our hero." The biography of Joseph Lazyan ends as follows:

“A loyal ideological soldier of the old Bolshevik guard, in the second half of the 30s, Lazyan, like thousands of others, fell victim to the bloody machine of Stalin's repressions. Arrested on November 7, 1937, during interrogations Lazyan categorically denied any slanderous accusations against him, nevertheless, he was sentenced to capital punishment and shot on May 9, 1938."

True, during the so-called. During the Khrushchev thaw, Armenian nationalists with communist party membership cards wanted to glorify the one who made the primordial Georgian land Lori a part of the Armenian SSR. As a result, in 1962, a street was named after Lazyan in Kirovokan (modern Vanadzor).

Today, one must not forget about the treacherous "exploits" of such natives of Georgia as Joseph Lazyan. Moreover, the mass of separatists in Samtskhe-Javakheti do not even hide their intention at the first opportunity to "follow the path of Lazyan" and organize a separatist rebellion on this primordially Georgian land.