100 years of the fighting brotherhood of Georgians and Borchali Azerbaijanis

On February 18-19, 2021, exactly 100 years have passed since, during the defense of Tbilisi, a detachment of Muslim Azerbaijanis from Borchalo and Tbilisi fought for the freedom and independence of Georgia against the many times' superior forces of the Red Army. The commander of the detachment, Edigarov, announced the unconditional devotion of the Muslim Azerbaijanis to the defense of Georgia. There is evidence of this - a report in the Georgian newspaper "Respublika". 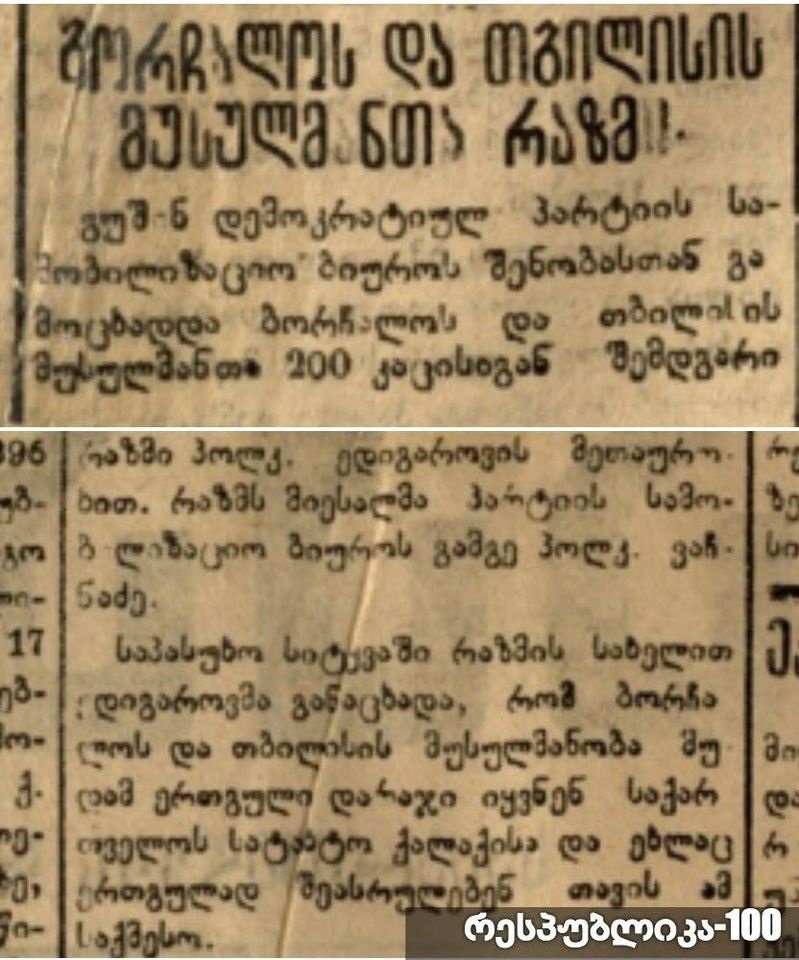 This was not the first manifestation of the fighting brotherhood of Georgians and Azerbaijanis. At the end of 1918, during the war between Georgia and Dashnak Armenia, a detachment of Borchali horsemen successfully fought as part of the Georgian army and inflicted significant damage on the Armenian aggressors. The plans of the Dashnaks to seize Kvemo Kartli and Samtskhe-Javakheti were then thwarted.

However, in 1921 the Georgians and Azerbaijanis were confronted by a much stronger adversary - Soviet Russia.

The Azerbaijanis of Georgia stood up to defend the Georgian state at the most critical moment. The Red Army was advancing on Tbilisi, which invaded the country under the pretext of "protecting the Armenians" (who revolted in the Lore region) and helping the rebellious workers (or rather the Armenian Dashnaks, who revolted in Shulavera).

“Kavkaz Plus” has already written about this in more detail in the materials “95 years of Armenian betrayal that led to the loss of Georgia's independence” (http://kavkazplus.com/news.php?id=3721) and “Kronstadt or two weeks, of which for the betrayal of the Armenians, Georgia was not enough to preserve its independence in 1921 " (http://kavkazplus.com/news.php?id=3739).

Events developed as follows: on the evening of February 18, the advanced units of the Red Army reached Soganluga. Georgian troops, including the Borchali and Tbilisi Azerbaijanis, fought off the attacks of the Bolshevik troops throughout the night, and at dawn, with the support of armored cars, they launched a counteroffensive and achieved serious success: 1,600 people were taken prisoner, and the retreating units of the 11th Red Army were struck artillery. This was, in fact, the first victory of the Georgian army over the Red troops many times superior to it. It allowed at least until February 24, 1921, to successfully defend the capital of Georgia.

However, the forces were unequal. Having pulled up reserves, the Red Army on February 24, after powerful artillery preparation, launched a decisive offensive in all sectors of the front. On the same day, the Georgian government evacuation began in Kutaisi.

On February 25, the situation in Tbilisi became critical: the Red Army outnumbered the ranks of the city's defenders several times. Under these conditions, the Georgian command made a decision: in order to preserve the army, in order to avoid casualties among the civilian population, to leave Tbilisi. Thus ended the heroic weekly defense of Tiflis in 1921, during which Azerbaijani soldiers fought shoulder to shoulder with the Georgians.

The Georgian army did not succeed in organizing an effective defense further due to the complete lack of prepared defensive lines, reserves, and the multiple superiorities of the enemy advancing from several sides. On March 4, 1921, the Red Army units advancing through Abkhazia occupied Sukhumi, and on March 9 Zugdidi fell. The red detachments broke through the Mamison Pass, which was considered impassable in winter, and began to rapidly advance towards Kutaisi, which there was no longer any strength or ability to defend.

At the same time, despite the frenzied Bolshevik propaganda, the Borchali Azerbaijanis were loyal to Georgia to the end. This is their sharp difference from the representatives of the Armenian diaspora in Georgia. It should not be forgotten that the rebellions (called by the Soviet propaganda "workers' uprisings") of the Armenian-Dashnak fifth column in the Lore, Shulaverah and Javakheti zones played a fatal role in the Soviet occupation of Georgia.

More than 100 years ago, despite heroic resistance to the Bolshevik invasion, Azerbaijan lost its independence, and then Georgia. Today, Azerbaijan was the first to free its lands from the occupiers and separatists. Abkhazia and the Tskhinvali region are still occupied in Georgia, and separatist regimes are rampaging there. But the liberation of Karabakh gives Georgia hope that sooner or later the occupation and separatism will be ended on Georgian soil.