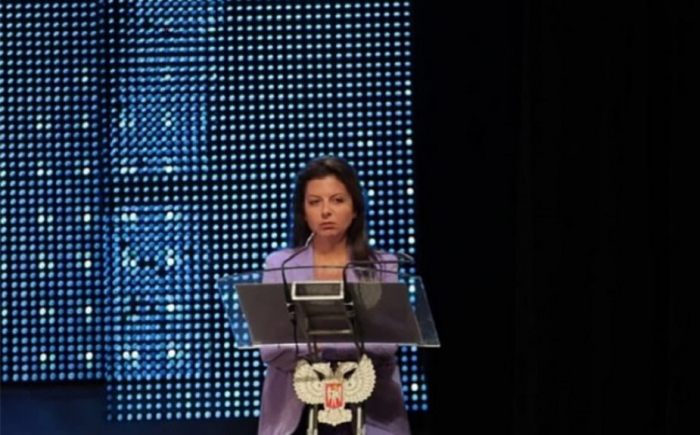 At a time when the positions of the current Kremlin regime were clearly shaken (and mass protests demanding the release of opposition leader Alexei Navalny showed this), the main Kremlin propagandist Margarita Simonyan, together with her propagandist husband Tigran Keosayan, unexpectedly for a certain time stopped "exposing the American agent" Navalny. Which, you see, looks strange. Indeed, not long ago there was a scandal between the Simonyan-Keosayan family and Navalny. Last year, Alexei Navalny released a video exposing the corruption schemes of this family, in response, Simonyan did not miss the opportunity to throw mud at Navalny.

But here, unexpectedly, instead of furiously "attacking" the same Navalny again and furiously defending her, so far the chief boss, Vladimir Putin, Margarita Simonyan has released several "duty" pro-Kremlin posts, where, by the way, she did not touch Navalny, 26 January sharply curtailed its "pro-Putin" activity.

Why this happened - one can guess and “Kavkaz Plus" has already expressed its assumptions in the article“ How the Armenian lobby “missed” Navalny ”(http://kavkazplus.com/news.php?id=31538#.YBP00HYzbIV). That is, it can be logically assumed that a certain part of the Armenian lobby, albeit belatedly, began to “change shoes” and, in fact, “throws” its former benefactor Vladimir Putin (at whom it is clearly annoyed that he “did not save Artsakh”) ... And he bets on those who, in their opinion, can come to power in the Russian Federation after Putin (and this is not only Navalny but also some other figures who, according to a number of signs, are close to going into opposition to Putin).

Influential Armenian nationalists promise their support for the future Russian government in exchange for the "drain of Putin" "for a reason." They want the new Russian government to begin with renewed vigor to support separatist projects, first of all, of course, Artsakh.

On other projects, except, in fact, "appropriated" by the Armenians of Georgian Abkhazia, the Armenian lobby by and large does not care. The main thing for them is that the precedents of support for separatism by the Russian authorities are preserved. And of course, Simonyan, as a propagandist, understands that the Russian people, by and large, do not care what happens there with the separatists of "Artsakh", but the separatists of Donbas (the self-proclaimed DPR and LPR) who stand for the "Russian world" will evoke their sympathy.

That is why Margarita Simonyan, instead of calling on Putin's supporters to rally around the leader and once again denounce Navalnyat, who are going to protests on January 31, January 26, “disappeared from the air.” And on January 27, Simonyan unexpectedly published a post from the separatist Donetsk: with the caption "If anyone has lost me, I am here."

The next day, January 28, the authorities of the separatist DPR organized a pompous forum “Russian Donbass” in Donetsk, where the key figures were not Russians, but representatives of the “ancient long-suffering people” who had arrived from Moscow - Margarita Simonyan, Tigran Keosayan, and Roman Babayan. The key point at the forum was the introduction of Margarita Simonyan, with her call to Russia to "take-home" the separatists of the DPR and LPR, together with the respective territories:

“The people of Donbas want to live at home and be a part of our great, generous Motherland. And we owe it to them. Mother Russia, take Donbas home, ”Simonyan said almost through tears.

It is clear that Margarita Simonyan and her fellow tribesmen do not care deeply about Donbas. And they (the Armenian lobby) themselves deliberately provoked the war in the East of Ukraine in order to get a precedent for redrawing borders and annexations. Those. again, for the sake of its notorious Artsakh.

The current "love for Donbas" Simonyan and her fellow tribesmen can be explained simply to ensure that Russia, even after the change of the current Kremlin power, takes under its patronage not so much the separatists of the DPR and LPR, as the "Artsakh" separatists. Meanwhile, the unbroken separatists in Karabakh have already begun to raise their heads and go to outright provocations, under the protection of Russian peacekeepers, erecting monuments to Nazi Garegin Nzhdeh on Azerbaijani soil.

So, to paraphrase Margarita Simonyan's call in Donetsk, you can: “Mother Russia, take Artsakh home”. Moreover, the propagandists associated with the Armenian lobby, the same Semyon Pegov, constantly emphasize that Russia should simultaneously annex both the DPR-LPR and Artsakh.