Muslim Ingush gave land to Orthodox Georgians for a church in Rostov-on-Don. An example for brothers-Georgians (Christians and Muslims) in Guria 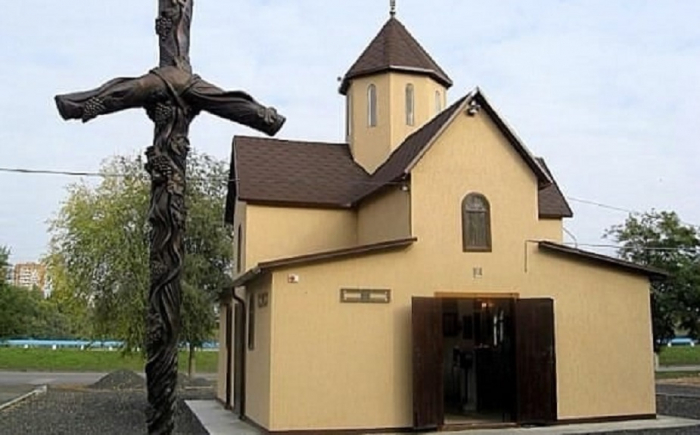 The incident in the Gurian village of Buknari, where a religious conflict over a house of prayer for Muslims broke out, echoed in the hearts of many Georgians. Let us remind you that the provocateurs wanted to prohibit Muslims from gathering in this village in a private house for prayer.

Fortunately, mutual understanding was quickly found between the neighbors, the inhabitants of this village. After all, there should not be conflicts in a country known for its religious tolerance among the Georgian people itself, between one might say brothers, some of whom are Orthodox and others are Muslims.

It is noteworthy that the vultures rushed to actively incite this conflict on religious grounds, including the "fifth column" represented by agents of influence. Among them, most of all, the famous provocateur Nikoloz Mzhavanadze began to shout about "Muslim dominance" and "Turkish occupation of Guria" (where is Turkey? Muslims in Buknari are all pure-blooded Georgians).

Fortunately, the conflict was quickly resolved and the provocateurs did not manage to use it seriously in order to harm the interfaith peace in Georgia, the international image, and disrupt internal stability.

President Salome Zurabishili and Prime Minister Giorgi Gakharia strongly opposed any violation of the rights of people on religious grounds, in particular the right to prayer, and against preventing Muslims from having a house for prayer.

In this regard, it is very indicative and instructive for the Georgians how the representatives of the fraternal Ingush people acted nobly towards the Orthodox Georgians. Material about this "Georgian temple was built on the land donated by the Ingush in Rostov" appeared in the "Kviris palette" publication 2 days before the sad events in Buknari:

“The Ingush gave their lands to the Georgians in the center of Rostov for the construction of a church. Former President of Ingushetia Ruslan Aushev wrote on the social network:

“Rostov-on-Don is home to a large diaspora of Georgians, whose number reaches tens of thousands (God forbid, they have multiplied to a million). The Rostov elders of the Georgians decided to build a Georgian Orthodox Church in the city.

We made a sketch, a working project, which the architects successfully implemented in the shortest possible time. We selected and bought for the church the best place in the center of Rostov, on Bodrai Street. However, the city authorities did not approve the project only because the land area was not enough for the church to have an architectural solution.

Unfortunately, the Georgians could not find a suitable free site in the city for building a church, as it is quite densely populated.

There was only one way out - the church had to be moved out of town, but this was also a problem because the majority of the parishioners of the Georgian church are elderly people. It will be very difficult for them to travel outside the city. All this created serious problems for both the Georgian society and the construction sponsors ...

Later, the Georgians found out that in the center of the city, not far from the site originally allocated for the church, there were several Ingush families who owned the necessary land plots. The Ingush learned about the problem of the Georgians. They also learned that the church is not being built just because there is not enough land to obtain a building permit.

And a miracle happened - all Ingush families disinterestedly transferred their lands to the Georgian diaspora!

As a result: a Georgian church is being built in the center of Rostov, and soon Georgian priests will serve in the Orthodox Church! "

This is an example of how people should act in relation to the needs of believers of another faith.

And if the Ingush had so much nobility that, being Muslims themselves, they could donate land for the church to Christian Georgians for free - why was it not found among the Georgian Christians in Buknari? Why at a certain moment some people did not have enough understanding and religious tolerance in relation to their own Georgian fellow villagers, brothers, people of the same blood but of a different religion? Why did they give Georgia's enemies a pretext to stir up a conflict aimed at splitting the country? The question is rhetorical ...