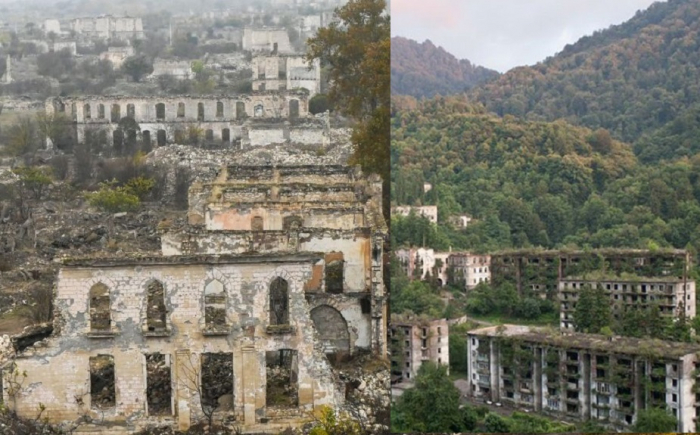 The liberation of Azerbaijani Karabakh, occupied by Armenia for over 27 years, has shown the whole world that separatism and aggressive nationalism are comparable in their destructive consequences to a nuclear catastrophe. In this case, the creation of the separatists - 0 (zero!). Even in the end, they are exclusively engaged in robbery, destruction, burning of houses and looting, nothing else.

After the Azerbaijani army entered the liberated Aghdam on November 20, 2020, which had been under the control of the Armenian occupation army and the separatist so-called “NKR” since the summer of 1993, Azerbaijani soldiers saw a picture reminiscent of the consequences of the atomic bombing of Hirasima. With one exception - for 27 years, Hiroshima was completely settled, and Agdam for all 27 years lay in ruins, which were deliberately "aggravated" by the Armenian occupiers, "further destroying" and desecrating mosques and other architectural monuments.

Separatism turned out to be more terrible than nuclear bombings. Today there is not a single surviving building in the liberated from occupation city of Aghdam. The ruins in many places are overgrown with villages and shrubs, and if in summer the greenery somehow hides total destruction, then in late autumn and winter, when the leaves fall and the weeds dry up, the landscape looks ominous and resembles paintings of the Apocalypse.

It is no coincidence that a native of Agdam, People's Artist, performer of mugham and folk songs, Nazaket Teymurova noted that the cities of Agdam and Fizuli, completely destroyed by the Armenian invaders and vandals, create the impression that an atomic bomb was dropped on them, as was done in Hiroshima and Nagasaki.

But not only Hiroshima and Nagasaki - Agdam and Fizuli, but also their own Chernobyl remained from separatism in the South Caucasus. We are talking about the city of Tkvarcheli in Abkhazia, which, even though the whole war of 1992-1993 was on the territory controlled by the separatists, and did not suffer from hostilities, but the "radiation of separatism" turned out to be so destructive for the Abkhaz people itself that it led to the complete devastation of this a flourishing city (like Agdam, Fizuli and other cities of Karabakh). Today, separatist-controlled Tkvarcheli resembles the notorious city of Pripyat, abandoned after the accident at the Chernobyl nuclear power plant. But there is hope, as the liberated from occupation Aghdam has already begun to revive before our eyes, that cities and villages of Abkhazia, as an inseparable part of Georgia, will also be liberated from the occupation and the separatist yoke and will begin to revive.

I would also like to appeal to the separatists, Armenian nationalists and those who propagate and support separatism everywhere with the question: what did your bloody "struggle" give? Nothing but destruction and ruin, grief and suffering! Including people for whose "independence" you allegedly fought.

Is it possible to compare today's unhappy and restless position of the Armenians of Karabakh, even those who remain next to the Russian peacekeepers with the peaceful and prosperous life of their own fathers and grandfathers, when Karabakh would be a part of Azerbaijan? And what will they live on next? The Diaspora will no longer “feed” the separatist “Artsakh” due to the liquidation of the latter. And without integration into the economy of a united Azerbaijan, the Armenians of Karabakh simply cannot survive.

But even if this integration is successful, there is still no escaping the question: why were tens of thousands of victims needed? Why, in the end, did the leaders of the Armenian nationalists "put" the flower of their own, the Armenian nation in a senseless war for a foreign land? Was it really impossible to live peacefully next to the Azerbaijanis on the Azerbaijani land, as they did before?

The same goes for the Abkhaz separatists. The Kremlin gave them to understand that further support for separatist Abkhazia is closely linked with the "self-destruction" of the Abkhaz people by dissolving them in the stream of Armenian aliens. From the same liquidated separatist "Artsakh", from Syria, Lebanon, the Republic of Armenia, Krasnodar Territory ... Did generations of Abkhazians dream about this?

The salvation of the Abkhaz is only in reconciliation with the brotherly Georgian people. But who will return the "gene pool" of the Abkhazian nation, which perished both during the fratricidal war of 1992-1993, and ruined by drugs, criminals, gang warfare during the restless existence of the separatist under-"state"? The spiritual and demographic "Hiroshima and Chernobyl" of separatism will be worse than the material ones.