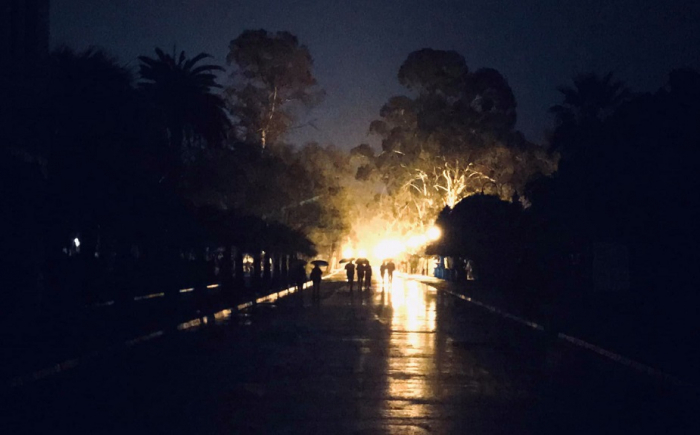 The separatists of Abkhazia are faced with problems and news that is not pleasant for the separatists. The collapse of the separatist "Artsakh" showed that the state of unrecognized non-statehood cannot last forever. The process of liquidating separatist formations has been launched - and this is causing a state close to panic among the separatists of Sukhumi. Although they are trying to calm down by the fact that, they say, "Russia is behind us."

But in general, Russia stood behind the occupying Azerbaijani Karabakh by Armenia and had its own military base on its territory. But this did not help the Armenian occupants and "Artsakh" separatists much.

The second unpleasant news closely related to the first (the liquidation of "Artsakh") is that the Armenians rushed to Abkhazia. Approximately 4 thousand of them have quietly and quietly arrived as “guests” of the Abkhaz Armenians. And they settled in the captured real estate by these Armenians - taken from the Georgian population expelled in 1992-1993.

However, apparently, the matter will not be limited to the first “refugees from Artsakh”. Mass resettlement of Armenians from the Azerbaijani territories liberated from the Armenian occupation is being prepared, as well as the hapless Armenian settlers from Syria and Lebanon, who did not manage to stay for a long time in Azerbaijani Karabakh.

And the third trouble, which is especially painful for the residents of separatist Abkhazia, is the rolling blackouts on the eve of winter. Since November 15, all over the territory of the separatist "republic", districts have been de-energized according to the schedule for six hours a day, creating serious inconveniences for the population. Moreover, even at a time when there is electricity, the voltage in the network is low, and turning on and off the system is accompanied by voltage surges, as a result, for ordinary consumers, household appliances either do not turn on or fail.

Considering that in fact, free electricity is the main source of heat for homes, this is more painful. However, it must be said that the separatists are partly to blame for the outbreak of the energy crisis. In the face of the almost complete collapse of the tourism industry due to quarantine, they relied on cryptocurrency mining. Mining farms began to grow like mushrooms after the rain: on some streets, cryptocurrencies are “mined” using cheap electricity, almost in every home. In some places, electrical networks simply began to not withstand the loads, especially since they are worn out to the limit.

Compared to last year, electricity consumption in separatist Abkhazia has increased by almost 20%. In principle, it is "not so critical" to introduce trips. But they decided to introduce them. As a result, Abkhazia begins to plunge into darkness. They will gradually cut off the electricity for six hours a day, in the future it maybe more.

The price that Abkhazia will pay for each kilowatt of electricity is several times higher than that established in the separatist "republic", which now lives exclusively on Russian subsidies and is simply unaffordable for the separatist authorities. If you pay for this electricity, there will be no money left for anything else. In response to requests from the separatists to reduce prices in the Russian Federation, they promised to "think".

There is, and the most direct one!

The Kremlin's methods of political pressure have long been well studied. Gas blackmail is commonly used. Like, "if you don't listen to us, we'll turn off the gas." So the Kremlin blackmailed even the seemingly “allied” Belarus. But by the same analogy, “energy” blackmail can also be used, especially in relation to separatists completely dependent on the Kremlin.

If the Armenians will move into Abkhazia quickly, the Abkhazians and migrants from Russia will be “turned on”. There will be sabotage of the Abkhaz separatists on this issue - "there will be no light."

Of course, he doesn't tell the separatists directly about this, but the coincidence of the beginning of the flight of "Artsakh" separatists from Karabakh on the one hand, the meeting between Putin and the puppet "president" of Abkhazia, Aslan Bzhania, on the other, and the beginning of a rolling blackout in the separatist territory are completely "accidental" it can not be.

If we touch upon the issues of electric power in the Azerbaijani territories, where until recently separatists ruled, it can be noted that in the Kelbajar region, which is being abandoned by the invaders, their vandalism and looting have reached unimaginable proportions. Not only do the invaders and separatists cut down trees, burn down the houses of Azerbaijanis expelled in 1993 - in the Kelbajar region they have completely removed power lines and even cut, dismantled, and removed the power poles. A small hydroelectric power station operating in the Kelbajar region has also been dismantled - all its equipment has been taken to Armenia.

There is a risk that Abkhazian separatists will have similar sentiments. For now, they have a hope that "Artsakh" and separatist Abkhazia are "different things." But as soon as they begin to understand that as Karabakh is being returned to Azerbaijan, so Abkhazia must return to Georgia, it is not excluded that the same looting will occur here. Having failed to create anything of their own, the invaders and separatists finally behave in a standard manner: they rob and take away someone else's, and what they cannot take away - they destroy and burn.