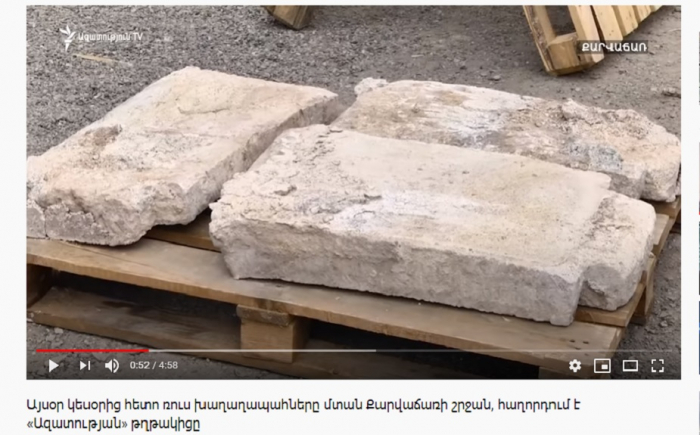 There is no limit to the arrogance of the Armenian invaders and their vandalism. Not only do they burn and destroy everything that can be burned and destroyed, leaving the Kelbajar region, they admitted to the whole world that they are stealing the priceless historical heritage of the Azerbaijani people from the ancient Albanian monastery of Dadivank.

In the material from the video “The priest of Dadivank claims that he will not leave. Houses are being burned in the village ”recently published on the website“ Radio Azatutyun ”(https://rus.azatutyun.am/a/30949235.html) literally says the following:

“The situation in Dadivank is difficult.

The abbot of the monastery Ter-Hovhannes Hovhannisyan claims that he will not leave the territory anyway, but there is already an agreement on the transportation of two khachkars, which are 800 years old. These khachkars, by the way, have always remained in this place and have never been transported, even before the war of the 1990s. "

Those. The invaders themselves admit that the unique Albanian khachdash (Armenian newcomers call them khachkars - although Albanian monuments of this kind are fundamentally different from the Khai khachkars) were created on the territory of Azerbaijan and never left this territory.

For 800 years the priceless cultural heritage and Albanian Christian shrines, which belong to Azerbaijan and the entire Azerbaijani people (including almost 300 thousand Christians of Azerbaijan), were in their place in Dadivank. And now, on November 14, 2020, the Armenian occupants, taking advantage of the generosity of Azerbaijan and the fact that they were given time to get ready, simply brazenly rob and do not even hesitate to talk about this robbery in the media.

Imagine how the Russian people would react if the aliens began to break down the walls of the ancient temples of Novgorod, Vladimir or Pskov, and take whole pieces of walls with unique inscriptions and frescoes outside Russia. It would be an unheard-of barbarism, plunder of national treasure and shrines! And this is exactly what the Armenian occupiers are doing on Azerbaijani soil, and they openly admit it.

Another relevant video material (it is in Armenian, but its meaning is clear without translation)

The video also shows the episode how the slabs "broken" from the wall of the church of the Dadivank monastery (most likely these are the aforementioned 800-year-old khachdashi) lie in the middle of the monastery courtyard, ready to be sent to Armenia.

It is sad that the Russian peacekeepers indifferently look at the defeat of Dadivank, and do not even take any action to stop the looting and desecration of Albanian Christian shrines.

And Ter-Hovhannes Hovhannisyan, if he still does not deceive journalists and remains in Dadivank, needs to prepare to give an answer to the General Prosecutor's Office of Azerbaijan in the case of embezzlement of the national heritage of the Azerbaijani state as a witness and accomplice.