Karabakh is Azerbaijan! But there is still a struggle for Georgian Abkhazia: there is a danger of the "Crimean scenario" 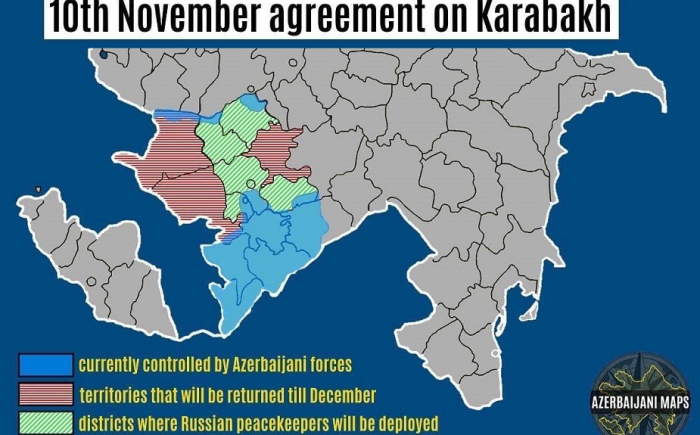 November 10 will go down in the history of Azerbaijan as the Victory Day in the liberation patriotic war against the Armenian aggressors and occupiers. It was on the night of November 10, 2010, in fact, that Armenia's surrender was signed!

The Armenian occupation troops are being removed from the entire Azerbaijani territory. In part of the territory of the former NKAO, they will be temporarily replaced by Russian peacekeepers - but most likely for only 5 years and only in order to ensure the gradual reintegration of the cities and villages of Karabakh populated by ethnic Armenians into United Azerbaijan. So that the Armenian lobby through these peacekeepers "does not do stupid things" - they will be balanced by the peacekeepers of Turkey.

Azerbaijani refugees are returning to their homes. Until November 15, the Kelbajar region will be cleared of the occupation forces, and the Lachin and Aghdam regions by November 20. The Azerbaijani villages-enclaves and semi-enclaves in the Gazakh region, not far from the border with Georgia, are also returned to Azerbaijan, occupied by the Armenian army and now devastated.

At the same time, Azerbaijan guarantees the observance of all rights and freedoms to the peaceful Armenian residents of Karabakh. After the reintegration of the Armenians of Karabakh is completed, the peacekeepers will most likely leave it. And this region, there is hope, will become the most prosperous part of Azerbaijan, where both Azerbaijanis and Armenians will live peacefully. Those of the Karabakh Armenians, who get rid of delusions and want to be full-fledged citizens of Azerbaijan, will obtain citizenship, confirm their property rights and remain quietly living in their homes. And those of the Karabakh Armenians who do not want to be a citizen of Azerbaijan will calmly sell their houses and apartments and leave. Azerbaijan is a multinational and exceptionally tolerant country towards national minorities; in principle, there will be no infringements of the rights of the Armenians of Karabakh as citizens of Azerbaijan who have been under occupation for a long time.

In addition, the blockade of Nakhichevan is lifted and a transport corridor through Zangezur is organized. Over time, we hope the question of the return of Azerbaijani refugees to Zangezur and other regions of the Republic of Armenia will inevitably arise.

However, most importantly, the ugly separatist entity called "NKR" or "Artsakh" is being liquidated once and for all. And this is a victory not only for Azerbaijan, but also for Georgia. The next step is the elimination of two other separatist regimes in the South Caucasus, in occupied Sukhumi and Tskhinvali.

Yes, obviously it won't be easy. However, the course of history cannot be reversed. This must be understood by both the occupiers and the Armenian nationalists who have "laid eyes" on the Georgian Abkhazia. The latter, it seems, from the support of the separatist "republics" are embarking on Plan B - the direct annexation of Abkhazia and the Tskhinvali region according to the "Crimean scenario."

It is interesting that because of this, the Abkhaz separatists themselves were already alarmed. On November 9, when the terms of Armenia's surrender were already being discussed around Karabakh, in the separatist Sukhumi, the deputies of the so-called "parliament of Abkhazia" held a meeting with the separatist "siloviki" in connection with the fact that in the village of Aibga, which is located on the territory disputed with Russia, bridge on the border river Psou.

The analogy with the recently built so-called "Crimean Bridge" to the Ukrainian Crimea annexed by the Russian Federation is rather ominous. There is also information that the "Artsakh" separatists who fled from Karabakh began to arrive en masse in the Krasnodar Territory and separatist Abkhazia. It seems that it is they who are now vitally interested both in "settling" in Georgian Abkhazia and in the fact that it was annexed by the Russian Federation. Their plans are obvious - then to create on the shores of the Black Sea, from Abkhazia and the Krasnodar Territory of the Russian Federation, "another Armenian state" instead of "Artsakh", which was already liquidated by the Azerbaijani army.

But this is already, in fact, "the agony of the doomed." A start has been given to the destruction of separatism. Although destabilization in Georgia is more than possible (including in Samtskhe-Javakheti, where the "Javakhk" militants not killed in Karabakh may return), the Armenian nationalists will not succeed. Nor will Sukhumi and Tskhinvali be separated from Georgia forever.

The world community is completely on the side of Georgia. The Georgian army is no longer what it was in 1992-1993. and even in 2008 Times have changed. Separatism will be eliminated, Abkhazia and the Tskhinvali region will return to Georgia, just like Karabakh returned to Azerbaijan!