There is a condition for the Armenian people to be able to continue living peacefully within the internationally recognized borders and establish normal relations with neighboring countries and peoples! 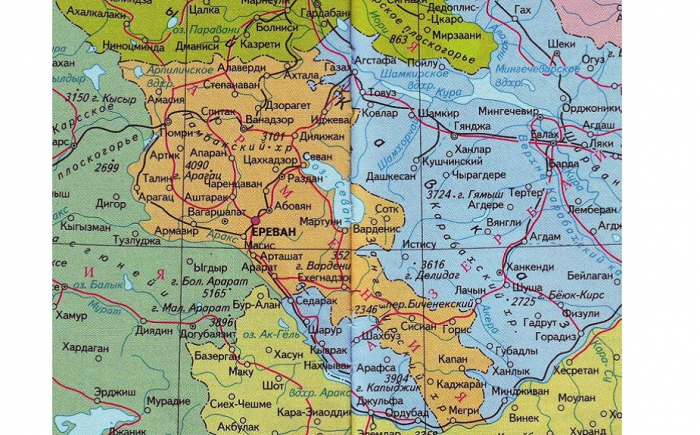 The further, the propaganda of the Pashinyan regime in Armenia becomes more and more unprincipled and similar to the propaganda of Goebbels in Nazi Germany. However, the trouble of the Armenian society is that, unfortunately, it believes in it.

One of the main provisions of Pashinyan's propaganda is that it is not the Azerbaijani people and the Azerbaijani army that are fighting for their land, but they say "exclusively" foreign mercenary fighters from Syria, and even under the leadership of officers of the Turkish General Staff.

On November 1, Armenian Prime Minister Nikol Pashinyan on Facebook once again announced the alleged "complete and exhaustive evidence" of the recruitment and delivery of "thousands of Syrian mercenaries" by Turkey to the Karabakh conflict zone. As confirmation of his words, the head of the Armenian government posted a video of the interrogation of a certain Syrian (as he introduced himself) Muhammad Al Shkhair. Moreover, this “Syrian,” or who knows who, did not look like a “terrible mercenary fighter” at all.

In principle, most Syrian Armenians know Arabic better than Armenian and are indistinguishable from Arabs. In an extreme case, they generally have no problem persuading any of their Arab neighbors to fly to Yerevan and “work as an actor” posing as a “Syrian militant recruited personally by Erdogan”. It is with such cheap theatrical subjects that Pashinyan's propaganda "feeds" the Armenian public today.

The absurdity of this propaganda has already been explained by the well-known Russian journalist Maxim Shevchenko:

Let us also remind that Azerbaijan is actually five times larger than the Republic of Armenia in terms of population. And over 1 million Azerbaijanis expelled by the invaders from Karabakh, as well as their children, many of whom were born in exile and have already matured, are more than anyone motivated to liberate their native towns and villages as soon as possible. Azerbaijan simply does not need some incomprehensible "warriors" who came from not clear where.

People with military training and modern military specialties literally line up in Azerbaijani military registration and enlistment offices. And they want to participate in the liberation of the Motherland. However, only a small portion is taken. The mass of worthy military specialists simply cannot get to the front. All units are fully staffed, losses are much lower than those of the Armenian invaders. And in such conditions, it is incomprehensible to use foreigners who know how, who do not know the language and who do not know how to obey the commanders, is simply nonsense.

On the contrary, the Pashinyan regime has a catastrophic situation with human resources. Like the Nazi regime in Nazi Germany in 1945, it “rowed” into the occupation army in Karabakh, suffering one defeat after another, everyone in a row, including children and adolescents, elderly pensioners, sick (almost disabled) women. Not to mention the huge number of terrorists, bandits and mercenaries gathered from all over the world. And not only of Armenian origin. Kurdish militants, terrorists from the Kurdistan Workers' Party, Greek militants and unprincipled "soldiers of fortune" of other nationalities are fighting for Pashinyan.

Pashinyan desperately tried to attract Russian soldiers as "cannon fodder" to fight for his interests and. However, in Moscow he was given a "turn from the gate", not allowing even former Donbass volunteers who fought for the separatist DPR and LPR to go to Karabakh.

Despite the fact that motley militants and terrorists are fighting on the side of the Armenian invaders, they cannot stop the advance of the Azerbaijani army. The mercenaries surrender their positions and flee, at the same time engaging in looting in the houses left by the Armenians, that is, in fact, robbing “their own”.

There is nothing surprising. In general, the current war shows that for the Armenian invaders, Azerbaijani Karabakh is a foreign land. And they do not feel sorry for this land.

Or otherwise, how can one explain the large-scale forest fires organized by the Armenian invaders through the use of phosphorus munitions in relict protected forests in the vicinity of the city of Shusha.

Secular oak and beech forests with unique biological diversity are burning. It will take decades, if not centuries, to restore these forests. And all this is done by the Armenian invaders in order to hinder the actions of the Azerbaijani unmanned aircraft.

About how the Armenian propaganda and those involved in it unscrupulously and brazenly lie about the fact that supposedly the forests in the area of ​​the city of Shusha were set on fire by the Armenian invaders, and the “Azerbaijanis” were very well disassembled by Yuri Podolyak in his video:

Indeed, Azerbaijan liberates its relatives the land, native mountains and native forests. This is the property of the entire Azerbaijani people and therefore the Azerbaijani army cannot, by definition, treat the natural resources of its native land so barbarously. Not to mention the fact that forest fires and smoke from burning forests make it difficult for the Azerbaijani army to attack.

On the contrary, the Armenian occupants, apparently realizing that they will not hold Karabakh, like the Nazi occupiers during the Great Patriotic War, resort to the policy of “scorched earth”. They are burning forests, destroying historical monuments. It is not excluded that the occupiers will also blow up dams, bridges and other infrastructure.

The most regrettable thing is that the Armenian society, distraught with nationalist propaganda, is ready to turn a foreign land into a scorched deserted desert - just not to live peacefully and good-neighborly with other peoples. The feeling of national superiority that the Armenian nationalists instilled in ordinary Armenians is akin to the feeling of "racial superiority" over other peoples that Hitler, Goebbels and other Nazis instilled in the Germans. It is no coincidence that their "heroes" are appropriate - such as the Nazi Garegin Nzhde.

Therefore, as in post-war Germany, after 1945, denazification and defascization was carried out, and in Armenia, in order to restore the health of the Armenian society itself, denazification and “depachinization” (cleansing the collective mind of Armenians from the nationalist delirium of the fascist Pashinyan) is necessary. This is a necessary condition for the Armenian people to continue to live peacefully within the internationally recognized borders and establish normal relations with neighboring countries and peoples.