Plans to involve Russia in war and aggression against Georgia 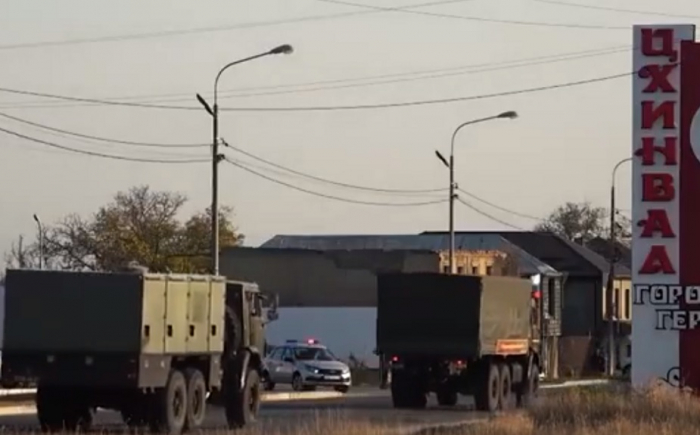 Disturbing news comes from occupied Tskhinvali. Here the concentration of the Russian occupation forces is taking place: additional equipment is being transferred from the North Caucasus.

Why do this - to concentrate troops in Tskhinvali, if Georgia has unambiguously taken a course towards a peaceful settlement of the conflict in the Tskhinvali region and does not threaten the occupiers, at first glance, it is not clear.

However, if we take into account that they want to drag Russia into a big war in the South Caucasus on the side of Armenia, that in order to drag Russia into the war, it is planned to break through the "military corridor" through the territory of Georgia and everything will fall into place. Especially considering that the occupied Tskhinvali region is the closest thing to the Russian base in Armenia. And in the Russian "hurray-patriotic" (and in fact, pro-Armenian) media, there are reflections on how bad Pashinin might be, but Russia is obliged to come to Armenia's aid in order to "prevent genocide."

At the same time, simultaneously with the breakthrough of the military corridor through the territory of Georgia, the belligerent "strategists" close to the Armenian lobby are also considering the issue of a parallel strike on the transit energy communications passing through Azerbaijan and Georgia.

It is still possible to understand such crazy goals from the point of view of geopolitics and from an economic point of view. The fact is that the Armenian lobby is today knocking over the thresholds of the heads of the largest energy companies of Russia, the same Gazprom, proving that he is just "turning up a case" when one blow can solve a lot of problems. First of all, remove competitors from the European market, which, they say, will partially lead to the "payback" of the operation. In this vein, in particular, the reason in the organization “Two-Headed Eagle”, which is headed by the Russian businessman and politician Konstantin Malofeev, who is quite close to the Armenian lobby.

Recall that Malofeev, through his organizations and mass media of a pseudo-monarchical persuasion, for example, the same TV channel "Tsargrad", not only supports separatism in the post-Soviet space but also substantiates the need for Russia's aggressive participation in regional wars on the side of such dubious allies as Armenian nationalists.

Recently, the site of the "Two-Headed Eagle" published material by Artyom Sharlay "And Pashinyan is not real!" (https://rusorel.info/a-pashinyan-to-nenastoyashhij/?fbclid=IwAR3XRyY_elUYTIq9w-PBgKp3khXH8QSJPUCRMsSZuiLyKr8I4EQ8BVA5Bnc). It, of course, gives a negative assessment to Pashinyan, but it suggests, as it were, an alternative strategy of Armenian aggression against Azerbaijan. Here is an excerpt from this article:

• Do the armed forces (AF) of Armenia and the NKR inflict strikes, which are very sensitive for Azerbaijan, on export gas and oil pipelines located in the zone of destruction of multiple launch rocket systems (MLRS) of the NKR and the Armenian Armed Forces? Does the MLRS strike on the civilians of Ganja scare the Armenians less with its consequences than the strike on the export infrastructure?

• Do the Armenian Armed Forces strike with the help of Iskander OTRK on the headquarters, decision-making centers, and the most important elements of the infrastructure of Azerbaijan?

The answers to these questions cannot be found in the plane of military strategy - there is not a single obstacle to their implementation, and the sooner they are applied, the sooner Azerbaijan will feel their consequences, and the patriotic upsurge will be replaced by the population's dissatisfaction with the resulting losses and inconveniences of military reality.

There are two options here:

• Turkey issued an ultimatum to Pashinyan on the inadmissibility of damaging the export infrastructure as a "red line", after crossing which Turkey may proceed to direct attacks on the Armed Forces and the territory of Armenia;
• Pashinyan's backstage agreements with curators in the West, who, in fact, made him the prime minister of the republic, did not provide for a reduction in energy flows from Azerbaijan to foreign markets.

In the first case, if the ultimatum to Turkey really exists, why is it not widely publicized? This would unite society around the authorities in the face of the threat of a new massacre, as a century ago, as well as mobilize diasporas in the far abroad, making lobbying for Armenia's interests more successful, and possible sanctions against Turkey more painful. This would make it possible to portray Turkey as a kind of bandit robbing little Armenia in a dark alley and demanding that it be silent. An information campaign would have dealt a very painful blow to Erdogan's image, especially painful given his plans to expand Turkish influence in Central Asia, Africa, and the Middle East - no one wants to deal with an outrageous, and neither do the local elites.

In the second case, everything is much more complicated: this means that those who argued that bringing Pashinyan to power was a multi-move of Soros, aimed at intercepting influence in the Transcaucasus from Russia and stabilizing the southern gas and oil transportation corridors, which had been located for many years, were right. at gunpoint "of the troops of the Nagorno-Karabakh Republic. In addition, Nagorno-Karabakh is the most pro-Russian region in the entire Transcaucasia; Having lost Artsakh, Armenia, which has not recognized it for almost 30 years, will be able to completely get out of the remnants of Russia's influence and go under the influence of the United States, which will lead it to another massacre as a victim.

To a large extent, it was Pashinyan who became the reason for the decision of Turkey and Azerbaijan to attack the NKR at the present time - he complicated relations with Russia with his Russophobic policy and glorification of Nazi criminals that Russia cannot now help Armenia openly without “losing face”. How to interpret the information that Grigor Ohanyan, the owner of the Beer House restaurant near Moscow, who is being sought by Russia on suspicion of the murder of former special forces soldier Nikita Belyakin, was released from custody in Yerevan on June 1, 2019? Or are Russian lives “not important” for Pashinyan's regime?

It should be borne in mind that not only an attempt to occupy Nagorno-Karabakh but even the establishment of its full-fledged blockade will allow Armenia to raise the issue of the Armenian genocide at the international level. Moreover, taking into account the lobbying and media capabilities of Yerevan, there is no doubt that the exodus of Armenians from Karabakh under the pressure of Azerbaijani troops (and the Armenians will leave without waiting for the arrival of Azerbaijanis) will take on a much greater sound than the similar exodus of Azerbaijanis under Armenian pressure a quarter of a century ago".

The meaning of the sentence "Two-Headed Eagle" is clear. Say, there is no need to bomb the peaceful Azerbaijani cities, as Pashinyan does, but a blow must be struck at transit highways. And then, Russia will come to the aid of the Armenians.

At the same time, it is understood that in order to "breakthrough" there will be a blow to the very "weak link" in the blockade of Armenia, which was chosen by the Armenian nationalists for its "breakthrough" - Georgia. In addition, a blow to the gas pipeline brings Georgia's economy to its knees, especially on the eve of the winter season.

Also, at the same time, a blow can be delivered in another "critical" place of Samtskhe-Javakheti, where the degree of separatism is already off the scale. After that, "breaking through the military corridor" through the territory of Georgia to help "Armenia, Artsakh and Javakhk" becomes a matter of technology.

Georgian patriots must understand the seriousness of the situation and the danger of the implementation of such plans. If Georgia cannot prevent the attacks of the Armenian occupiers on the transit infrastructure in Azerbaijan, as well as the build-up of the Russian grouping in the occupied Tskhinvali, then it is quite within its power to cope with the rising head of the Armenian "Javakhksim" separatism. The most important thing now is to take the situation in the region under control and urgently begin to bring to justice the Armenian "Javakh" separatists who violate the Georgian legislation.
Who are so impudent that they openly recruit militants and mercenaries in Karabakh. If one does not prevent the actual establishment of power by separatists in the Samtskhe-Javakheti region, this will show Georgia's "weakness". And indeed it can provoke a blow to both the energy structure and Georgia from several sides, which is mortally dangerous for the Georgian statehood.