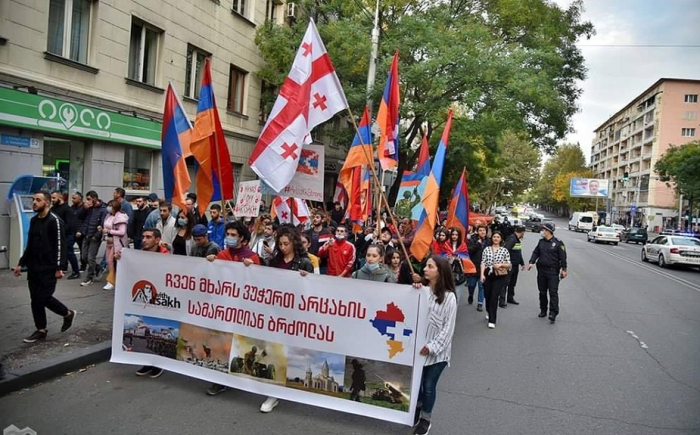 The so-called separate flag of "Artsakh" next to the national flag of Georgia in the center of Tbilisi ...

How would the Georgian patriots react if a procession took place in the center of Tbilisi in support of the separatists of Abkhazia or so-called "South Ossetia", who carried out the genocide of the civilian Georgian population of Abkhazia and the Tskhinvali region? Of course, as a spit on Georgia and the Georgian people, who gave thousands of lives of their best sons and daughters for the territorial integrity of the country, which has not yet been restored. As an outrage against 300 thousand Georgian refugees expelled from their homes, who cannot return home, they cannot visit the graves of their relatives and friends who were killed by separatist fighters.

It was such a provocative procession, insulting to the Georgian people, which was organized by the Armenian nationalists in the center of Tbilisi. The separatist edition jnews.ge, which is the mouthpiece of the Armenian separatists in Samtskhe-Javakheti, wrote enthusiastically about him under the headline “March in Tbilisi -“ in support of the just struggle of Artsakh ”(http://jnews.ge/?p=60354).

Armenian nationalists do not even hide their support for separatism and dismemberment of Georgia. It should be reminded that the aforementioned separatist "Artsakh", created by the Armenian occupants on the lands of Azerbaijani Karabakh, recognizes the so-called "independence" of separatist Abkhazia, etc. "South Ossetia" and has with them the so-called. "diplomatic relations"! This is simply a mockery of Georgian refugees, whose houses and apartments in Abkhazia are often occupied by some Armenian nationalists, while others - from the separatist "Artsakh" - are preparing to move there.

In principle, it would still be possible to understand the Armenians who are worried about their fellow tribesmen, whom the criminal Pashinyan regime throws into the slaughterhouse in order to keep the occupied lands of Azerbaijan, friendly Georgia. That is, it would be understandable if the Georgian Armenians, for example, would come together to sympathize with the Armenian mothers, whose children are dying due to the fault of the Yerevan regime in a senseless war of conquest, and would call for an early peace, which is possible after the complete de-occupation of Azerbaijani lands by Armenia. But brazenly and defiantly calling your march in support of Artsakh, in support of separatism and the seizure of foreign lands is too much!

Here is an excerpt from the aforementioned jnews.ge propaganda material:

“On October 22, a peaceful procession took place in Tbilisi from the Metromsheni quarter to the Church of Surb Echmiadzin in Avlabar called“ In support of the just struggle of Artsakh ”. The peaceful march was organized by the Union of Armenian Youth of Georgia.

Representatives of various spheres of the Armenian community of Georgia - politicians, public and cultural figures, as well as residents of Javakheti took part in the peaceful supporting procession.

According to JNEWS estimates, about 1,000 people took part in the procession.

Participants of the peaceful march on foot from the Metromshen quarter of Tbilisi reached the Armenian Church of Surb Echmiadzin, where a liturgy for peace and lighting of candles was held.

It should be reminded that the second action is taking place in Tbilisi. The participants in the first action demanded that the Georgian media objectively cover the war in Nagorno-Karabakh".

Although jnews talks about a "peaceful" march, many of its participants are already ideological separatists, whose open recording took place at the central stadiums of Ninotsminda and Akhalkalaki, who tried to break through the Georgian-Armenian border, but were stopped by Georgian border guards ... And now these, obsessed with the idea of ​​separatism, are participating in separatist processions with separate flags in the very center of Tbilisi. Is it not clear where this PR of separatism is going? Shouldn't the Georgian society be aware of the full danger of such connivance at separatism?

Georgia, a country that lost 20% of its territory due to separatists who acted in a united front with the Artsakhksimi, which has over 300,000 refugees, cannot tolerate separatist propaganda in the very center of the capital. Moreover, at these processions, nationalistic and misanthropic slogans are heard insulting the citizens of Georgia of Azerbaijani nationality. They insulted those Azerbaijanis who are irreconcilable to separatism and advocate the immediate restoration of the territorial integrity of Georgia.

How long will such organizations as the Union of Armenian Youth of Georgia or the Armenian Community of Georgia continue to PR of separatism in Georgia? Will the activities of hostile organizations in Georgia be suppressed, as contrary to the laws of Georgia, inciting inter-ethnic strife, calling for the violation of the territorial integrity of Georgia and friendly Azerbaijan, propagandizing separatism and ethnic cleansing?

The question is not rhetorical... 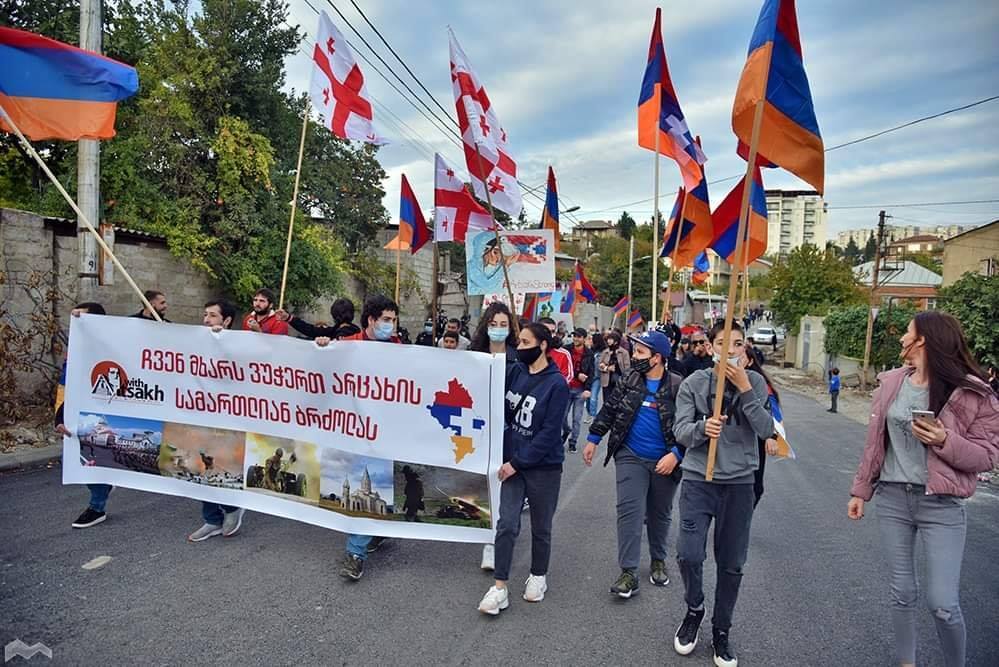