"Artsakh government in exile" to move to separatist Abkhazia? 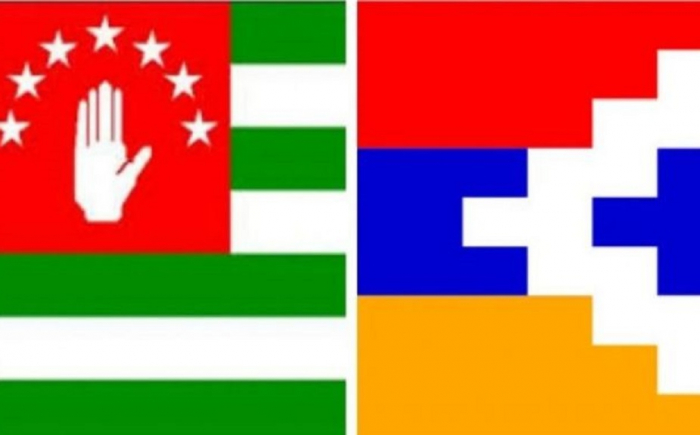 The further the more there is evidence that, firstly, the "Abkhaz" and "Artsakh" separatist projects were originally created and coordinated from one Armenian nationalist center, and secondly, that Abkhazia is destined to play the role of a "reserve Armenian state" in case "Artsakh" tolerates crash.

The point is that the fate of the separatist so-called "NKR" or "Artsakh" has already been decided in fact. The offensive of the Azerbaijani army and its liberation from the Armenian occupation of Karabakh cannot be stopped. The separatists will leave Khankendi tomorrow, not today, and it is natural and expected that they will form the so-called “Artsakh government in exile”. But where this “government” will actually be located is a big question.

Of course, at first, “Artsakh” officials are evacuated to Yerevan. But in order to "officially" place the "government in exile" there, it is desirable that the so-called. “Artsakh” was recognized by Armenia itself. But this is not and is unlikely to be. Pashinyan understands perfectly well that the “recognition of independence” of the separatist NKR by Yerevan will not help him to keep Karabakh, and the position of Armenia itself, as a country trampling on international norms, will only complicate.

Therefore, it is logical to expect that the so-called. The "government of Artsakh in exile" will move to those separatist "states", if I may say so, that "recognize" its fake "independence". And these are separatist Abkhazia created in the Georgian territories occupied by Russia and the so-called. "South Ossetia". The latter disappears - it has no outlet to the sea, and the Armenian community in Tskhinvali is small. Remains Abkhazia, where local Armenians are already in power, led by the former commander of the Baghramyan battalion Galust Trapizonyan.

And the "preparatory work" to move the "Artsakh" separatist "government in exile" together with tens of thousands of "Artsakh" Armenians to Sukhumi is already in full swing. Moreover, the Armenian "masters" also connected the Abkhaz separatists to it, who do not even have enough thought that by doing so they are signing the death warrant for the Abkhaz ethnic group. After all, given that the Armenian community already dominates in Abkhazia and the “Artsakh” Armenians will be added to it, the same “Artsakh government in exile” can very quickly become the “government of Abkhazia”. Armenian naturally.

How the Armenian nationalists know how to “cleanse” the land they “like” from the “undesirable” population is perfectly shown by the example of Azerbaijani Karabakh, from where they expelled over 1 million Azerbaijanis. There are only 60 thousand Abkhazians left in Abkhazia itself, at best. to destroy and expel them for the representatives of the "long-suffering people" will not be a problem at all.

Nevertheless, the Abkhazian separatists engaged in the “self-destruction” of their people and joined the “game” planned by the Armenian lobby. This essentially follows from the material "Citizens of Abkhazia demanded to recognize the independence of Nagorno-Karabakh" published in the pro-Armenian edition Eadaily (https://eadaily.com/ru/news/2020/10/21/grazhdane-abhazii-potrebovali-priznat-nezavisimost-nagornogo-karabaha).Here is it in full:

“Representatives of the civil society of Abkhazia made an appeal to the offices of international associations and organizations in connection with the military operations in the zone of the Karabakh conflict. They joined the demands for recognition of the independence of Nagorno-Karabakh. It should be noted that the appeal is published by the state news agency Apsnypress.
The document was signed by Batal Kobakhia, Arda Inal-Ipa, Liana Kvarchelia, Diana Kerselyan, Nadezhda Venediktova, Natella Akaba, Said Gezerdava, Asida Lomia, Alkhas Tkhagushev, Inal Khashig, Marietta Topchyan, Elena Kobakhia, Bella Kukatseva, Elena Bagatseva, Ladaria, Inna Barchan, Rosita German.
The appeal was sent to the UN Security Council, Council of Europe, European Parliament, the office of the EU Special Representative for the South Caucasus.
EADaily provides the full text of the appeal from representatives of civil society in Abkhazia:
“The whole world is watching with concern and concern the oppressive news coming from the zone of the Karabakh conflict about the death of military and civilians. Most of the dead soldiers are young people who are barely 20 years old.

The tragedy of the Armenian and Azerbaijani families, which are losing the most dear people in the war, which is taking place today, makes us return 30 years ago, when the huge Soviet empire was leaving the past. It is obvious that the Karabakh, Georgian-South Ossetian, and Georgian-Abkhazian conflicts are the result of the unfinished process of the collapse of the Soviet Union. However, despite the collapse of the USSR, the ranking of the former Soviet peoples continues to operate: some deserve freedom and independence, while others do not, even if they have become victims of aggression.

Unfortunately, it is precisely this approach, actually limited by the framework of Bolshevik autonomization, that dominates international mediation. The world's leading countries have formally taken up the resolution of conflicts, instilling hope in people suffering on different sides, however, in fact, they contribute to the freezing of conflicts, since after bloody wars it is impossible to restore "territorial integrity" in the former Stalinist borders. The path to the resolution of the conflict through the recognition of the right to self-determination in the South Caucasus is rejected, despite the existing precedents in the world, for example, Kosovo. The persistence shown in this respect actually halts the search for a rational path based on modern realities towards long-term peace and cooperation in the entire region.

The prominent human rights activist of our time, Andrei Sakharov, once warned about the pernicious nature of preserving "small empires" and called for the granting of all Soviet republics, regardless of their political status, equal political rights to independently decide their fate. As a result of ignoring Sakharov's constructive and just approach, peoples who survived the war and suffered huge sacrifices often remain isolated and excluded from the negotiation process.

At the same time, all people become victims of the fetish of "territorial integrity", regardless of which side of the conflict they live on since the denial of new realities hinders the free development of not only unrecognized and partially recognized republics but also countries with broad international recognition.

Today we see with what force the war in Karabakh has flared up again, and how quickly the internationalization of hostilities takes place, the involvement of new regional players in the conflict, which is fraught with the expansion of the disaster zone far beyond the local conflict.

In these conditions, all means of international influence should be directed towards an immediate cessation of hostilities. The international community has the means and mechanisms to stimulate a productive peace process, especially economic and political sanctions, which are often and widely used in less critical situations.

For the sake of saving both Armenians and Azerbaijanis, who are dying in this endless war, it is necessary to immediately start negotiations, in which Karabakh must participate. Without a dialogue between the conflicting parties, the negotiations become incomplete and hopeless, unable to lead to mutual understanding and peace.

It is unacceptable for one of the parties to the conflict to be deprived of the right to vote. Therefore, more and more often all over the world there are demands for the recognition of Karabakh's independence. We add our voice to these requirements! At the same time, we understand that recognition should be followed by a discussion of many accumulated controversial issues within the framework of the negotiation process, which should be supported by the whole world and continue until a mutually acceptable solution is reached.
All who are involved in the processes of resolving conflicts in the South Caucasus must realize their responsibility for artificially supporting the phantoms of the Soviet Transcaucasia, demanding more and more victims.

For the sake of lives that can still be saved, we appeal to all countries and organizations on which the fate of the peoples of the South Caucasus depends today - not to interfere with the natural course of history in the name of renewal, development and peace in the Caucasus! "

It is very good that the appeal mentions henpecked Andrei Sakharov, who, under the leadership of his wife, Armenian nationalist Elena Bonner (Alikhanyan), sought the dismemberment of Georgia, Azerbaijan, and Russia, in fact, initiated separatist processes in the former USSR. Abkhazian separatists themselves recalled who was the real initiator of their "independence". But at the same time, the Abkhaz do not understand that by demanding the "independence" of the so-called NKR, they themselves are putting trouble on their heads.

"NKR" in full force will move to them, to Abkhazia. Together with the "government", terrorists, militants, and "refugees" who have already looked after the Abkhaz lands by the sea. The "unhappy refugees" will very quickly become full-fledged owners here. The remnants of the Abkhaz will have to go into exile for the second time in history, as it already happened during the 19th century Muhajirism that took place during the Russian colonization of the Caucasus.