Operation "Retribution in the Mountains" or the end of the first separatist entity in the South Caucasus. Abkhazia and Samachablo are next! 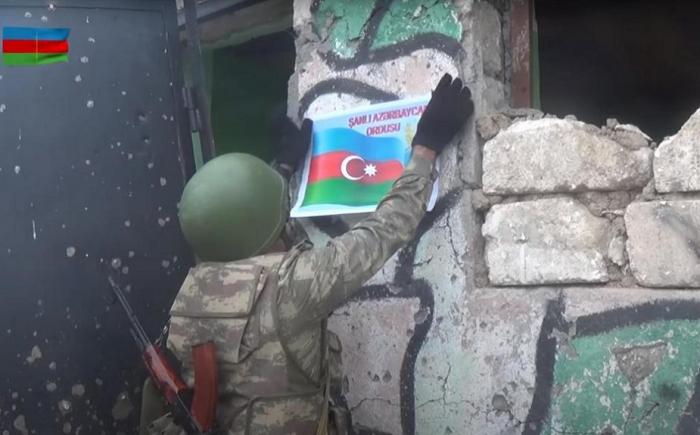 What is happening today in Karabakh, which is being liberated by the Azerbaijani army, is the first precedent for the complete elimination of a separatist entity in the South Caucasus - the so-called "NKR" or "Artsakh". We will remind that not only recognizes the "independence" of the separatist regimes in Sukhumi and Tskhinvali (and they recognize the independence of "Artsakh", which even Armenia did not recognize!), But was also an "example" for the Abkhaz and Ossetian separatists. First of all, in the conduct of ethnic cleansing of the indigenous population. In Abkhazia, Armenian militants from the so-called Baghramyan battalion played a key role.

Now the ugly separatist pseudo state formation "Artsakh", based on hatred, ethnic cleansing and the expulsion of over 1 million Azerbaijanis from their homes, is living out its last days. The front of the Armenian occupiers and separatists is crumbling. The Azerbaijani army has already liberated such key cities as Dzhabrail, Hadrut, Fizuli, Zangelan and surrounding villages, a "cleansing" from the occupants of the outskirts of the city of Kubatly is underway and an attack on other areas of Karabakh still held by separatists.

The losses of the invaders and separatists are enormous: over 300 tanks and other armored vehicles, thousands of killed and tens of thousands of wounded soldiers, militants, mercenaries and terrorists (many of whom are not citizens of Armenia, therefore, Yerevan does not take into account losses). The Azerbaijani army captures as booty entire military bases of the occupiers with weapons, ammunition, and equipment. All this the Armenian aggressors, fleeing, hastily abandoned, not having time to either take out or destroy.

To stop the panic mood, the Armenian side several times downplays its losses, however, even the "officially recognized" as of October 21, about 800 dead look almost a disaster (taking into account that the real Armenian population of the empty occupied Karabakh was about 50 thousand people).

Today, those separatists who have stained themselves with crimes against the peaceful Azerbaijani population, participated in its genocide, urgently leave Nagorno-Karabakh. Among them, it is possible that those who also managed to “fight” in Abkhazia and even bring “trophies” from there. There is panic in the ranks of the separatists. In fact, some cities of Nagorno-Karabakh that have not yet been liberated by the Azerbaijani army are already 80% empty. A significant part of the Armenian population and military ranks hastily left Karabakh. On the Khankendi (Stepanakert) -Goris highway near the Lachin corridor, there are terrible traffic jams, in some places there is shooting for, in order to get ahead out of turn.

At the same time, there is a danger that separatists and militants from Azerbaijani Karabakh, under one or another guise, will move to the regions of Georgia already populated by Armenians. First of all, to the separatist Abkhazia, where the Armenians have already become the majority. Mass penetration of terrorists and militants from "Artsakh" to "Javakhk" is not excluded - from one separate project to another. Moreover, both local natives and Armenian nationalists had no relation to Georgia before.
Perhaps they will appear under the guise of "tourists" or "unfortunate refugees" and again put pressure on the pity and hospitality of the Georgian people.

In no case should one succumb to such provocations and allow the mass settlement of Georgian lands by militants. Having appeared as "unfortunate refugees", the terrorists and militants from "Artsakh" the very next day, together with their local like-minded Armenians, the citizens of Georgia, can raise a separatist rebellion in Samtskhe-Javakheti.

Now the Armenian nationalists who live in Georgia will "press on the pity" of the Georgians and talk about the "unfortunate refugees from" Artsakh ". However, separatists leave Karabakh in a relatively comfortable and safe environment. On a car surrounded by property, in warmth and comfort. It cannot be compared with how the Georgian civilian population fled from Sukhumi from separatists and militants-thugs in September-October 1993. When hundreds of people froze to death on the cold passes.

But most importantly, the inglorious end of "Artsakh" shows that separatism can and should be fought. That the "status quo" with the expulsion of refugees is not forever. The Georgian army should study well the experience of the liberation war with the Azerbaijani army. Georgia has yet to restore its territorial integrity. Yes, today the Georgian government, like the government of Azerbaijan for many years, demonstrates a desire for peaceful resolution of conflicts, peaceful reintegration of Abkhazia and the Tskhival region (Samachablo) into United Georgia and the return of refugees. Unfortunately, the separatists and their Armenian patrons do not even want to hear about the return of Georgian refugees (especially now, when new applicants from "Artsakh" have appeared for their houses and apartments). This means that being open for a peaceful dialogue and a peaceful resolution of the problem of Abkhazia and Tskhinvali, Georgia should not give up other opportunities to liberate its land.