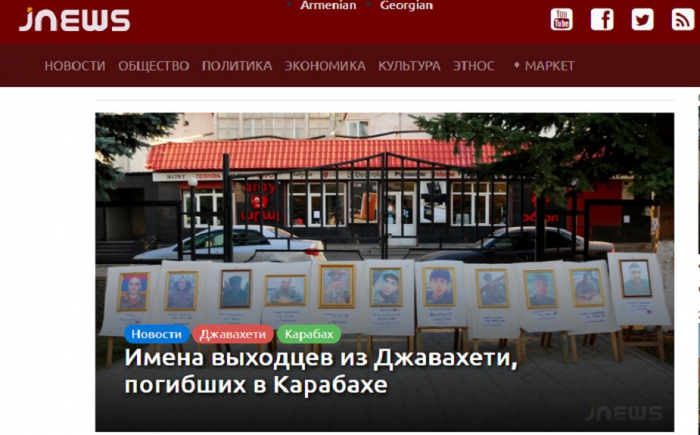 When in 2019 a monument to separatist militant Mikhail Avagyan was erected in Akhalkalaki municipality, who "distinguished himself" by bloody crimes not only in Azerbaijani Nagorno-Karabakh, but also in Georgian Abkhazia, "Caucasus Plus" warned that the propaganda of separatism would not bring the Armenian population to good Samtskhe-Javakheti.

And here is a confirmation of this: after the outbreak of hostilities in Karabakh, during which the Azerbaijani army liberated its native land step by step, Armenian militants and terrorists from all over the world rushed there. Among other things, many Armenians from Samtskhe-Javakheti were able to take part in the battles - those who were in Armenia, or somehow managed to get there. As a result, the families of Georgian citizens of Armenian nationality in Samtskhe-Javakheti began to receive the first news of the death of their relatives in a foreign land in a war, to which Georgian citizens should have nothing to do.

The separatist edition jnews.ge has published “The names of people from Javakheti who died in Karabakh” (http://jnews.ge/?p=60116&fbclid=IwAR0lDzEOQ3Vv1MWG-XEzohnadcruj6Z-LTL5mCcJsTbUAq4) Here's the list:

This list will undoubtedly grow. Indeed, only according to the official data of the Armenian side as of October 19, the total number of deaths in Karabakh since the beginning of the war on the Armenian side is 729 people, but even the most "pro-Armenian" military experts say that this figure should be increased at least 3 times (most the corpses of the dead Armenian militants remained in the territories liberated by the Azerbaijani army, until they were identified, not all were handed over to the Armenian side, many were not found and are listed as "missing in action", etc.).

The grief of the families of Armenians, citizens of Georgia, who learned about the death of their children, many of whom went to fight in a foreign land, without listening to their parents, is understandable. Nevertheless, the separatists use the deaths of these Armenians, immigrants and Samtskhe-Javakheti, to "heroize" them and whip up separatist nationalist hysteria, which this time is directed not so much against Azerbaijan as against Georgia.

Today, in Samtskhe-Javakheti, among local Armenians, anti-Georgian sentiments are stronger than ever. Georgia is accused of not allowing the transit of military cargo to Armenia and the dispatch of militants there, including from Samtskhe-Javakheti. At the same time, the arguments of reason for many Georgian citizens of Armenian nationalism infected with nationalism, alas, do not work. Indeed, in fact, the Georgian border guards detained militants from among the "Javakhk" Armenians who were eager to go to war in Azerbaijani Karabakh, and saved many of them from certain death or from life-long disability. The parents of these young people, duped by the separatists, should thank the Georgian Government and the Georgian border service for their adherence to principles.

Alas, there are no words of gratitude to Georgia yet. And then, only curses against the Georgian state and more and more separatist slogans.

The heroization of separatist militants killed in Karabakh by the "Javakhk" Armenian separatists, alas, today serves to mobilize Armenian youth into the ranks of their illegal separatist organizations. Today, these dead militants have been declared "heroes", they are represented in this way both by the separatist media and, unfortunately, by the municipal authorities of Akhalkalaki and Ninotsminda.

For stability on the territory of Georgia, it is more necessary than ever that Georgian law enforcement agencies take measures to prevent the glorification of the fallen separatist fighters. Of course, the Georgian authorities understand the grief of the families who have lost their children, relatives and friends, but you need to honestly tell them: "Your children died in the war for the seizure of foreign lands." They, in fact, were killed while committing a crime against a state friendly to Georgia. And so that this does not happen again, it is necessary that the Armenian youth from Samtskhe-Javakheti in no case travel as part of illegal armed terrorist groups to the occupied territories of Azerbaijan.

It is also unacceptable for Armenian youth to participate in the activities of separatist organizations in Samtskhe-Javakheti, since they are doing everything to incite ethnic hatred in Georgia, as well as to lead a separatist war to the south of Georgia, similar to the one in Abkhazia, where we will remind the Armenian nationalists played their a key bloody role in the ethnic cleansing of the Georgian population. At the same time, the media and Internet resources that propagandize and heroize the separatists should be closed and blocked. These resources act against the interests of Georgia, violate Georgian legislation, call on the youth of Samtskhe-Javakheti, citizens of Georgia of Armenian nationality, to join the ranks of separatists and mercenaries, to go to a separatist war against a friendly state for Georgia.