Armenia, like 100 years ago, is going to "change borders" at the expense of Georgia 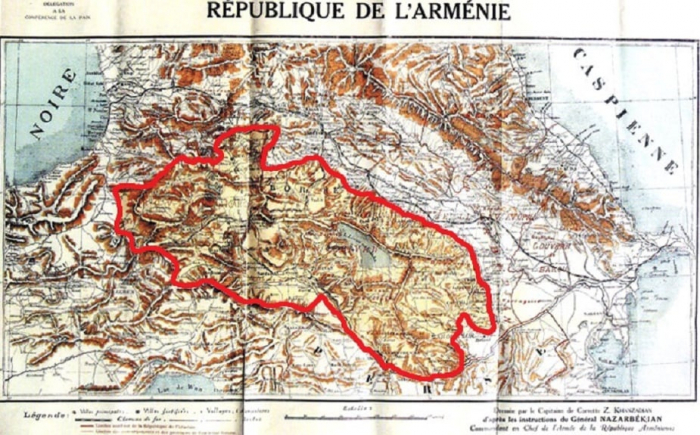 The Dashnaks at the beginning of the 20th century fomented the First World War as best they could. The First Balkan War in 1912, in which the future Nazi criminal Garegin Nzhdeh fought against the Ottoman Empire, could well have developed into it. In the end, the First World War was nevertheless kindled after the terrorist attack of 1914 in the recently Ottoman Sarajevo. However, in the end, the "geopolitical game" of the Dashnaks, who hoped to dismember Turkey in their own interests with alien forces and blood of others, turned into a collapse of their plans to build a "Great Armenia".

History repeats itself somewhat. Today, the Armenian lobby is kindling with all its might the Third World War and is actively trying to put together an anti-Turkish coalition. All with the same goal - to achieve a redrawing of borders in the region, both at the expense of Turkey and other countries, which the Armenian nationalists have written down as enemies.

The above map is dated 1919. It was then that the Dashnaks put forward their first territorial claims to the "Republic of Armenia" following the results of the First World War (https://nashaarmenia.info/wp- content/uploads/2020/09/ Republique_dErivan_1919.jpg). The claims at that time were still quite "modest". The Dashnaks have not yet included in their "Great Armenia" many lands of Eastern Turkey, in particular Lazistan and access to the Black Sea. These claims appeared later, during the preparation of the Treaty of Sevres, when the Armenian lobby managed to win over the powerful US President Woodrow Wilson to its side. But even with "modest" claims, the Armenian nationalists then included the Georgian Samtskhe-Javkheti into the "Republic of Armenia".

Why did Armenian nationalists remember this map today? The fact is that Yerevan clearly seeks to “put together a coalition” of “dissatisfied with the borders” in the Middle East and Eastern Mediterranean region and to put together its “great Armenia” at the expense of the territories of its neighbors. And although Armenian propaganda in every possible way emphasizes that it claims the lands of Eastern Turkey (the so-called “Western Armenia” by Armenian nationalists), it is clear that at the first opportunity it will “grab” Georgian lands for itself, if the process of redrawing the borders at the suggestion of Armenian provocateurs starts.

Let us remind that in 1992 the Armenian nationalists spoke about "miazim" and the annexation of Azerbaijani Karabakh. They did not even stutter about Abkhazia and their claims to it. Nevertheless, at the first opportunity they ignited a separatist war in Abkhazia, they participated in it and today, in fact, Abkhazia has turned into “another Armenia” on the shores of the Black Sea, and the Armenians “settled” in the houses and apartments of Georgians expelled from their native land.

But in relation to Samtskhe-Javakheti, Armenian nationalists, initiating the process of changing the borders, do not even hide their claims. Therefore, the attempts of the Armenian lobby to form "coalitions" with the aim of revising the borders cannot but inspire alarm.

Here are the main points from the above article:

“Turkey is the only country that opens a war front everywhere and threatens its neighbors if they want to exercise their legal rights,” said Greek Foreign Minister Nikos Dendias. “We have to create Pax Mediterranea because we see an imperial regional power coming back with some fantasies about its own history, and I mean Turkey,” French President Macron said.
“Germany and other partners are beginning to agree with us that Turkey's agenda is problematic right now. If six months ago some people said that only France accuses Turkey of various things, now everyone sees the problem, ”Macron said….

In the 21st century, the West once again puts the "Turkish question" as an element of the Great Game, said Artsakh security expert Hrachya Arzumanyan.
“Armenia is obliged to take its place and clearly and clearly formulate the Armenian response in the coalition of states, which is forming around the processes in the Mediterranean. It is necessary to leave the Soviet narrative and return to our own - thousand-year-old Armenian. Remember that you are a civilization and you, once again, have a chance to take your place at the table of ancient civilizations. Armenia in the 21st century can only be a civilizational state, ”he said.

According to Arzumanyan, the union of the Bolshevik and Kemalist projects in the 20th century made it possible to postpone the choice at the expense of Russia, which ceased to exist. The expert is sure that you will not be able to play such a game again.

Speaking in Moscow at a meeting of the CSTO, SCO and CIS defense ministers, Armenian Defense Minister David Tonoyan directly pointed to Turkey's expansionist ambitions as the main threat to the international security.

Armenia is ready to cooperate in various formats to prevent this threat. These are the CSTO, the SCO, the Greece-Cyprus-Armenia format, and the French-Armenian cooperation. About the threat from Turkey Armenia should also conduct a dialogue with Georgia, which Turkey also has plans for. Armenia has more than once demonstrated its ability to defend regional security and contribute to the new world order. But it is high time for Yerevan to move away from the “defensive” positions and think about its place in the future, where Turkey and the region will be different. Borders have a habit of changing. "

It is very interesting that “Armenia must conduct a dialogue” with Georgia and at the same time claims to the primordial Georgian lands and does not even think to hide it. It is not difficult to imagine what kind of "dialogue" it will be. Dialogue of ultimatums against Georgia.

In principle, ultimatums from Yerevan are already being distributed. This is how one can assess Tevos Arshakyan's material published on the armenianreport portal close to the Yerevan regime under the heading “Indignation of armenianreport” and under the offensive for the Georgian backgammon heading “Armenophobic Georgians were sold to the Turks for 200 thousand dollars”  https://www. armenianreport.com/ru/pubs/ 258016/, , which contains a direct threat of an attack on the Georgian military airfield in Marneuli only on the basis that Turkey helped its modernization:

“For example, the same Iskander, one strike of which on the Georgian-Turkish airfield will quickly bring Tbilisi, Ankara and Baku to their senses. Are Georgians ready for such a development of the situation? It is unlikely, but they are no longer able to object to the Turks and Azerbaijanis. The dollars of the Turkic neighbors turned out to be too attractive for the Georgians. They sold themselves to wealthier neighbors, and lost their independence, national dignity and good neighborliness. The only feeling that we can return to them is the fear that they will certainly experience when faced with the threat of a strike on their territory by Armenian Iskander and Su-30 SM. But they will have to blame only for their pettiness and betrayal. "

Of course, Armenia will only be able to strike blows at its neighbors, to whom they are hypocritically broadcasting about "friendship", only with the support of stronger countries. And here the Armenian lobby seeks to force seemingly very different forces to act in their interests - Russia and the CSTO countries on the one hand, France, Greece, Cyprus on the other, and a number of Arab countries on the third. The goal of this coalition is still the same - to destroy stability in the region and initiate the process of redrawing borders and ethnic cleansing in the interests of the "long-suffering peoples" of which, by far the most "long-suffering" Armenian nationalists consider themselves.

“The first official visit of Armenian Foreign Minister Zohrab Mnatsakanyan to Egypt, his talks with his Egyptian counterpart Sameh Shukri, the reception by the country's President Abdul-Fattah al-Sisi, the meeting with representatives of the Armenian diaspora cannot be considered an ordinary event. One can agree with the opinion of the adviser to the Armenian Foreign Minister Ruben Karapetyan, who stated that Armenia is starting to implement a new strategy of foreign policy actions, one of the important steps of which is "returning to the Middle East."

Events in the Eastern Mediterranean led to the emergence of an anti-Turkish diplomatic and potentially military front with the participation of a number of European countries and states of North Africa, in particular Egypt. In this regard, Armenia made an important move, declaring its support for Greece and Cyprus in the conflict with Turkey, which began to be perceived as an application for participation in this coalition. "

However, it is unlikely that the countries that the Armenian nationalists have already gathered to "divide" will calmly watch the formation of an aggressive coalition. Moreover, this "coalition" does not even hide its intention to cut the routes of energy supplies passing through Azerbaijan, Georgia and Turkey.

Whatever the “coalitions” may be, the response to attempts to redraw borders and support new hotbeds of separatism should be to strengthen the defense capabilities of the states whose lands are already being “divided”.