They cannot live without historical falsifications: the Georgian Radamist was "denied" the right to the Armenian throne 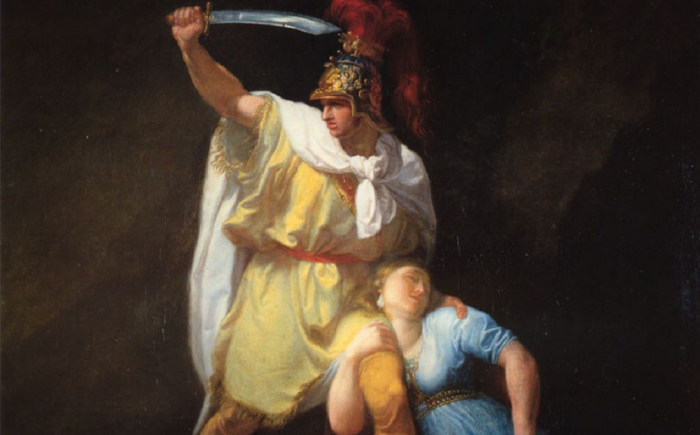 The fact that the Georgian dynasty Bagrationi was turned out to be "Armenian" falsifiers and nationalists from Armenia spread fabrications wherever possible. But they completely deny the historical fact that the throne of Armenia itself, when a very short period in antiquity still existed under this name, was occupied by the kings from the Georgian dynasty of the Farnavazids.

And this is not at all surprising, since, in fact, there have never been dynasties of "Hay" origin on the throne of a state called Armenia. Those. historical Armenia can with much more reason be considered a "Georgian" state than a "Hay" state.

Recall that the king Radamist from the Farnavazid dynasty, the son of the Iberian king Farasman and the nephew of another king of Armenia of Georgian origin, Mithridates, went down in history. Radamist was the king of Armenia in 51-53 and 54-55. A detailed account of the dramatic fate of King Radamist is contained in the XII Book of the Annals by the ancient Roman historian Tacitus.

Tacitus and other Roman historians always call Radamist "the king of Armenia" and his Georgian "Iberian" origin does not bother them at all. But for the Armenian nationalists, who consider the Georgians, like other neighboring peoples, "savages" and "inferior race" in everything owed to the "ancient Armenians", even the mention of such a historical fact is considered unacceptable. How is it so that Georgians, even if they were of royal origin, ruled by “great and ancient Armenians”.

The story of King Radamista has become a subject for many works of European culture and art. The plot, briefly but emotionally outlined by Tacitus, forms the basis of a number of works of art:

• The operas Zenobia to the libretto by Metastasio were written by Giovanni Bononcini in 1737 and Johann Adolph Hasse in 1761.

It seems that within the framework of the fact that the Armenian authorities want to extend their influence to Georgia and get the Georgian authorities to open transit for Armenia through the occupied Abkhazia and the Tskhinvali region without their de-occupation, it was decided to use this historical plot to focus on the "ancient Georgian-Armenian friendship" ...

For example, an announcement for the upcoming production of Handel's opera Radamist in Armenia: “Armenian-Georgian history will come to life in Garni temple” (https://www.lragir.am/ru/2020/09/09/182793/):

“What can connect the Georgian king Radamist, the Armenian king Trdat, the Garni temple and the opera of the German composer Handel? First of all, history, historical facts recorded by the Italian historian Tacitus in his famous "Annals" of the 12th century, which were used to write the libretto for Handel's opera "Radamiste".

The plot of the opera is only in general terms based on the episodes described by Tacitus, and the place and time of the action is Armenia, the Garni temple, 53. AD It is here, according to the plot, that serious royal passions of a royal scale are played out. The main character is the Iberian prince Radamist (married to the beautiful Zenobia, daughter of the Armenian king Mithridates). The king of Armenia Trdat fell in love with his wife, who decided at all costs to take possession of Zenobia, exterminate her family and seize the lands of the king of Thrace, Farasman (father of Radamist). And this despite the fact that Trdat has a devoted wife, Polyssen, with whom, in turn, the Pontic prince Tigran is hopelessly in love. The latter only creates the appearance of an alliance with Trdat, in fact, it helps all married couples to reconcile, risking their lives and sacrificing their love for Polyssen. It seems that nothing good will come of these love polygons, but fortunately (according to the libretto) everything ends with a happy ending. Well, now this tangled story today will try to revive Armenian, Georgian and Russian figures: Handel's opera “Radamist”, which turns 300 this year, will be staged in Armenia in 2021, and our magnificent pagan Garni temple. Armenian singer Barseg Tumanyan, soloist of the Bolshoi Theater of Moscow Anna Aglatova (with Armenian roots), opera singer Yulia Lezhneva and other artists will perform as performers. "

In general, nowhere is it indicated that both Radamist and Mithridates were the kings of Armenia from the Georgian dynasty of Fanavazids, who were replaced on the throne of Armenia by the Parthian (Turkic) dynasty of Arshakids.

The Hai dynasties related to the present Armenian ethnos, the very short history of the state called "Armenia" does not know. And by the way, Radamist was not a "Georgian king", since he did not occupy the throne of Iberia - he was precisely the king of Armenia of Georgian origin.

Even in details, when there are ancient Roman sources recognized by the whole world as authoritative, Armenian nationalists go to silence and falsifications. And even when they hypocritically talk about "Armenian-Georgian friendship" and when they need a lot from Georgia. Needless to say, when they start using their own Armenian sources. It seems that it is simply impossible to find unfalsified and historically true information there.