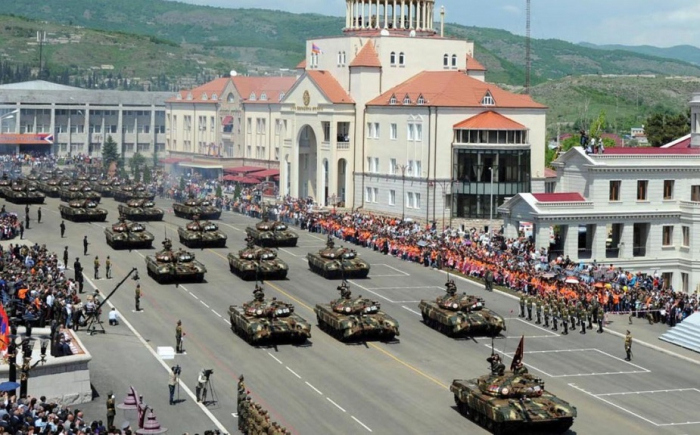 It seems that the Armenian provocateurs no longer know how to "drag" Russia into the "big war" in the South Caucasus. The aggression of Armenia against Azerbaijan in the Tovuz direction, accompanied by calls for Russia to "intervene" in hostilities as "Armenia's ally in the CSTO" is the most eloquent confirmation of this. But Russia did not succumb to the provocations and did not allow itself to be drawn into the war. However, this does not mean that the warmongers will stop there.

A new strategy has emerged: Yerevan and the "NKR" puppet regime in the occupied Azerbaijani territories of Karabakh began a game of "good and bad investigators". And for the Russian patriotic public, the regime in Khankendi, in contrast to Yerevan, is allegedly presented as exclusively "pro-Russian", which cannot imagine its existence without "unity with Russia." As a result, narrow-minded Russian patriots have the illusion that Russia's presence in the South Caucasus can be preserved by redeploying a military base from Gyumri, from where the American protege Pashinyan "survives" it, to Azerbaijani Karabakh occupied by the army under the command of the same Pashinyan.

Recently, the pro-Armenian resource “Iarex” published an article by Simon Karakhanyan “Russia can seriously engage in Nagorno-Karabakh, and Yerevan can lose it” (https://iarex.ru/articles/ 77326.html), in which it was unobtrusively suggested that it was the puppet separatist “ NKR "has become a kind of Russian" outpost "in the South Caucasus. Here are excerpts from the article:

“While in Armenia they are restricting in every possible way, reducing Russian-language television and radio broadcasting, while the unnecessary increase in Russian-language hours in schools is being discussed, or even the question of the expediency of Russian theater in independent Armenia is being raised, Nagorno-Karabakh decided to go the other way.
On the eve of the 29th anniversary of independence of this unrecognized country, the press secretary of the President of Karabakh, Vahram Poghosyan, wrote on his Facebook page that the country will increase the airtime of TV programs in Russian. The corresponding amendments to the law have already been initiated.

In addition, the number of hours allocated for the study of the Russian language in general education schools and universities will be increased. The President also ordered to place texts in Russian on information signs throughout the republic.

Formally, this message followed the publication in one of the Armenian newspapers, in which the Karabakh authorities are accused of anti-Russian sentiments. However, if you look closely, it will not be difficult to understand that this is a kind of response to the Armenian authorities.

The last few years, and especially after the July clashes on the Armenian-Azerbaijani border, the authorities in Yerevan do not miss the opportunity to remind that they coped with the Azerbaijani aggression exclusively on their own. Thus, they indirectly say that they do not count on the help of either the CSTO or Russia itself, whose military base is still located in Gyumri. The authorities of Nagorno-Karabakh understand that with such a logic, Yerevan will soon not lose the opportunity to represent the interests of Karabakh in the negotiations, but will generally lose Karabakh itself. By forcing events, Stepanakert wants to ensure stability for itself. The Russian protectorate, firstly, will strengthen the Karabakh positions in the negotiations with Yerevan, secondly, it will increase the chances of getting the right to sit at the negotiating table as a party to the conflict, and thirdly, it will bring financial injections into the country. And in the long term, it will probably resolve the issue with partial recognition. "

The article contains an explicit proposal that it would be nice to move the Russian military base from Gyumri to Khankendi (Stepanakert).

However, the military base and the presence of the Russian military in Gyumri, in the internationally recognized territory of Armenia and their presence in the occupied Azerbaijani territories of Karabakh, are "two big differences." In the first case, Armenia as a sovereign state can invite any foreign troops to it. But the whole world recognizes Karabakh as the territory of Azerbaijan. And the military base of the Russian Federation, like the Russian military, can appear there only with the consent of Azerbaijan and nothing else.

"Luring" the Russian military to Karabakh, even under the pretext that "Yerevan and Pashinyan are" bad "and Russophobes, and we" love the Russians "is nothing more than luring Russia into a trap that may well result in World War III.

After all, it is unlikely that such a deployment of the Russian military will be approved by Azerbaijan and Azerbaijan's ally, Turkey. And Turkey is NATO. As a result, the Russian Federation "out of the blue" comes into conflict with the most powerful Western military bloc. If Russia, as suggested by Simon Karakhanyan, in order to "justify" the presence of its military on foreign territories, recognizes the "independence" of the puppet NKR, this situation will only worsen.

In fact, in some ways the same situation is being repeated, which led to Russia being drawn into the First World War, which was destructive for it. Then Russia was dragged into “signing up” for Serbian terrorists. But the Serbs (if we do not take into account their criminal elite) at least were really fraternal in relation to the Russian Slavic Orthodox people. Now the Russians are being dragged into "signing" for the Armenian nationalists worshiping Nazi criminals like Garegin Nzhdeh, who seized foreign lands and organized ethnic cleansing. All the more so in the conditions when Russia has suffered a series of failures in its projects for the supply of energy resources to foreign markets. And here she is also tempted by the opportunity to leave at risk other people's energy projects - the same "Southern Energy Corridor".

Such provocations will not lead to anything good. 106 years ago, Russia's involvement in a world war turned out to be a disaster for it. In the current situation, if Russia is made a formal "instigator" of the Third World War, participating in the occupation of foreign lands and "robbing" on international transit routes, it will definitely ruin it. But, first of all, it will also bring disaster to the countries of the South Caucasus region, including Georgia, which Armenian "strategists" are already openly considering as a "training ground" for military confrontation and a "corridor" for the transfer of arms from Russia to Armenia and the Azerbaijani territory.