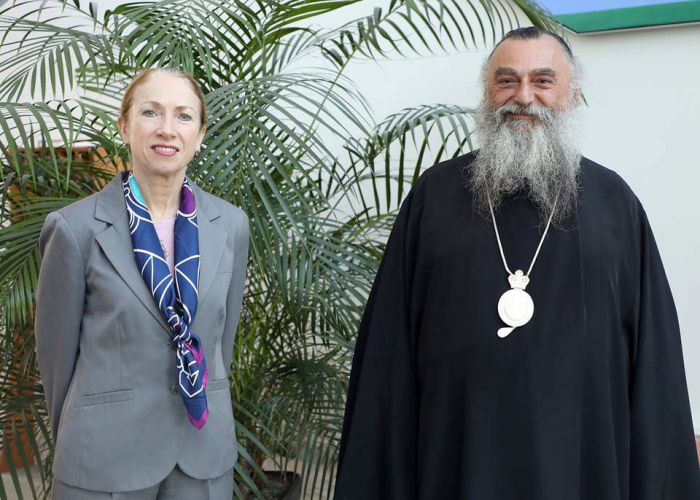 It seems that the Armenian extremists and separatists who have become active in the Georgian region of Samtskhe Javakheti understand only the language of force and "serious warnings." In fact, despite the fact that the US Ambassador to Georgia Kelly Degnan arrived in Samtskhe-Javkheti on the eve of the landmark date of August 8, 2020, and visited a women's Orthodox monastery near Lake Paravani, making everyone understand that the United States considers separatism and destabilization of the situation unacceptable in the region - this did not calm the extremists. As soon as she left, clashes and riots broke out in the city of Akhalkalaki between the two groups of separatists.

Also, apparently, the American special services got information about much more serious and dangerous plans of the Armenian extremists in the region concerning Georgian shrines. Let us recall that there was once an attempt to seize a Georgian temple by force.

On September 30, 2017, Armenian extremists attacked the Georgian police guarding the Kumurdo temple, a pearl of Georgian medieval architecture, where there are a lot of Georgian inscriptions and not a single Armenian one. Then a crowd of Armenian thugs wanted to seize the Kmurdo cathedral and install their khachkar in it. Special forces were called in to repel the attack, but this did not stop the attacking Armenians, who began throwing stones at the police. Only by arresting the instigators of the riots, the police then managed to take the situation under control. However, Kumurdo Cathedral is still listed in the list of 465 Georgian churches officially claimed by Armenian extremists.

There are a high likelihood and danger that separatists and extremists in the Javakheti region may begin a massive seizure of Georgian shrines in order to provoke a conflict and "blow up" the strategically important region of Samtskhe-Javakheti, through which transit routes and energy routes of great importance pass.

This prospect is extremely worrisome to the US authorities, primarily the Donald Trump administration, to whom, in fact, the Armenian lobby in the US has already become hostile. It supports Joe Biden in the upcoming elections and can carry out "tasks" to destabilize the situation not only in the United States but also in other regions of the world.

On a significant day, the Orthodox Feast of the Transfiguration of the Lord on August 19, the US Ambassador to Georgia Kelly Degnan received Metropolitan Nikoloz of Akhalkalaki and Kumurdo.

According to U.S. Embassy in Tbilisi, the sides discussed the Ambassador’s recent visit to Samtskhe-Javakheti and the many ways the Embassy, the Metropolitan, and the Georgian Orthodox Church work together, including fostering good relationships with other churches and the ethnic-Armenian population in Samtskhe-Javakheti.

US Embassy in Georgia never mentions "the Armenian population of Samtskhe-Javakheti" just for nothing. It is possible to assume with a high degree of probability that the conversation with the Metropolitan of the Georgian Orthodox Church, who is in charge of the Kumurdo Cathedral, touched upon the situation with the churches of Javakheti, perhaps the US Ambassador called for restraint in all forms of possible provocations by local extremists and separatists.

This is also a clear hint to the "population" - the extremists and separatists so that they "calm down".

Will the separatists in Samtskhe-Dawakheti listen to this very eloquent signal from the United States? The question is complex ... Apparently, the “flywheel” of escalating tension in Samtskhe-Javakheti and provoking a separatist conflict here has already been launched.