They steal and pour dirt on Georgia: an answer to Karen Kazaryan 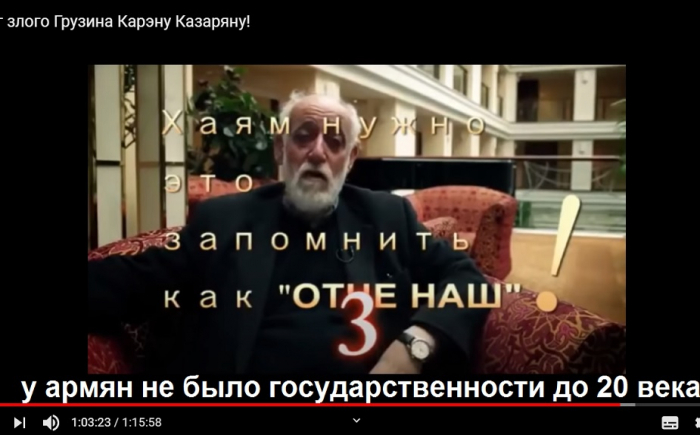 After a blogger under the nickname "Evil Georgian" in his video blog exposed the arrogant misappropriation of Georgian products (churchkhela, sulguni), cultural heritage (dances) and others by Armenian counterfeiters, the Armenian counterfeiters immediately began to brazenly declare that they say they were not stealing anything, " Armenians already have a lot of their own ”, etc. A certain Karen Ghazaryan distinguished himself with particular arrogance and lured insults of the Georgians. "Angry Georgian" dedicated a whole video to exposing these Armenian nationalist lies:

The video shows that the Armenian nationalists are trying in every possible way to humiliate the Georgian people, to prove that in comparison with them, the "ancient and great Armenians," the Georgians are "savages" and that they have only "a thousand-year history", etc.

But if you carefully study history, it has already been proven that the Georgians began to cultivate grapes and make wine 8 thousand years ago and that it was the Georgians (the Georgian tribe of the Khalibs) that for the first time in the history of mankind began to process iron and were the first to forge iron daggers, which are still an integral part of the Georgian national costume.

In the video, the Armenian myth is also very reasonably broken that the Georgian alphabet was supposedly invented by the Armenian Mesrop Mashtots:

Georgian writing, according to the latest archaeological finds and the data of scientists, appeared much earlier than the Armenian one, and most importantly, it initially has completely different roots from the Armenian letter and, judging by the presence of three types, the Georgian writing has developed and improved over the centuries.

The ancient Georgian letter "Asomavruli" was used from the early centuries, it was distinguished by its roundness and the same size of letters was common until the 9-10th centuries. Since the 9th century, the letter "nuskhuri" arose - a church one that was more economical with an angular oblique outline. Since the 11th century, the letter "Mkhedruli" has been developing - military or civilian with various vertical sizes and rounded shapes. At the same time, according to scientists, the Arabic script had an influence on the letter "Mkhedruli". The fact is that the educated part of Georgians, especially kings and princes and the highest nobility, military leaders, in addition to their native Georgian language, almost always knew Turkic, and also often Farsi and Arabic. That is the language ​​of interethnic communication in the Near and Middle East. These languages ​​writing based on Arabic graphics in the process of evolution, which acquired smooth forms and in order not to rebuild from writing smooth letters of Turkic, Persian or Arabic texts to oblique or angular, passing to Georgian at the courts of Georgian rulers, in the Georgian army they gave Georgian letters also smooth and rounded shapes.

So the culture and writing of the Arabs and Turkic peoples in a certain way influenced the Georgian writing but in no way the Armenian writing, which, incidentally, never had its military or civilian variety by analogy with "Mkhedruli". And it's clear why. After all, the Armenians have long lost their statehood and, accordingly, their military class".

As we can see, Mesrop Mashtots and the Armenians did not have the slightest relation to the evolution of the original Georgian writing system, as well as to their creation.

We are here again returning to the same thing, in order to develop culture-art, and the same writing, you need to have your own land, your state on this land, your nobility, your army, and much more inextricably linked with the traditions of peoples "rooted" in the centuries ... How can all the people have this, which did not have their own state (and the authoritative Western historian speaks about this in the video), or their army, or their nobility (merchants and financial tycoons who cleverly got rich on trade do not count)?

So it turns out that the nationalists-falsifiers of the people, who were settled in a foreign land, and "presented" the state - their entire history is based on myths and inventions, and all "cultural heritage" - brazenly steal from neighbors.

And at the same time, they feel for their neighbors, in spite of all the benefits that they have done for them and make a terrible nationalistic hatred, which shows through even where it is hypocritically said about "friendship and brotherhood."