If you steal, then at least do not disgrace yourself: how Armenian falsifiers steal others 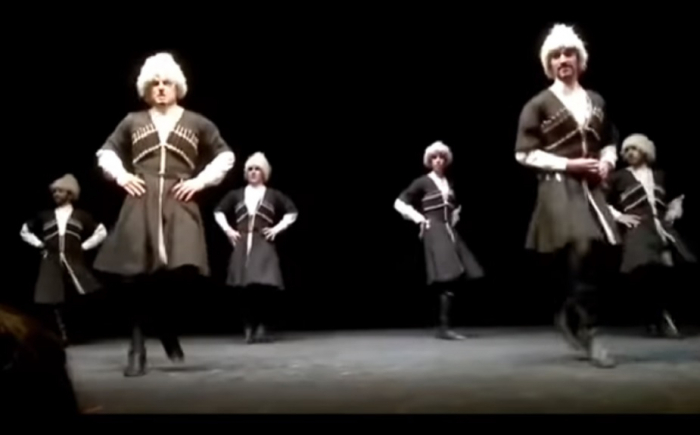 Recall back in 2015, on one of the YouTube channels a video titled "Armenian Wedding Dance," Gevorkian Dance Academy, USA "a video was published in which Vartan and Siranush Gevorkian danced the Georgian national dance from Zakharia Paliashvili's" Daisi "opera. A scandal erupted and the Armenian choreographers even had to apologize that they, they say, called the stolen Georgian dance Armenian “wrongly”.

However, alas, since then the Armenian campaign of appropriation of someone else's has not only not been curtailed but has become even more arrogant and defiant. This is particularly stated in the video:

As we can see, it is especially noted in the video that the stolen dances in stolen Georgian clothes are danced by counterfeiters without the main attribute of these clothes - the dagger. This, by the way, shows a complete lack of understanding of the Armenian falsifiers - what exactly they are stealing.

Nobody told the Armenian appropriators of someone else's what a Caucasian national dress is in general - a Circassian coat or a chokha. But in reality, it is military, military clothing. Everything in it is thought out to the smallest detail from the point of view of the warrior's convenience. In fact, these are the clothes of the "special forces" of the past.

The main attribute of a warrior in the Caucasus has always been a dagger. This is a weapon that can be used at a critical moment, in the event of a surprise attack, in order to protect yourself and protect your family and your people.

Therefore, a man never parted with a dagger. Other weapons were specialized. The same saber, an invariable attribute of an equestrian warrior, was not always carried with them “in everyday life”, but the dagger was carried with them always and everywhere.

But this can be understood “at the genetic level” only by the people of born warriors, such as the Georgians. How can the Armenians - immigrants to the Caucasus, who were not even allowed to carry weapons in the same Ottoman Empire - realize this? So they stole the “special forces soldier's costume” from the Georgians simply by ignoring its main attribute, without which this costume generally loses its meaning and is simply not needed.

Why do you need a military suit if you are not a warrior? If your ancestors for centuries did not know how to handle a dagger, did not know what military service is? It turns out that the choreographers-falsifiers "genetically" have a subconscious fear of a man with a weapon, and they even release their dancers onto the stage without daggers in someone else's stolen military clothing? It looks just funny and sad.

The most interesting thing is that a lot of Armenian falsifiers have not only “stolen” everything that can be stolen from others but have also managed to convince those they are robbing that what was previously stolen from other peoples is also “theirs”, Armenian. In particular, the Azerbaijani dance "Kochari" is one of the types of the Azerbaijani dance of the yalli.

And if the Armenian falsifiers managed to "camouflage" the theft with the dance of the Kochari, then with the Georgian dances it can be seen literally with the naked eye.

Why disgrace yourself then? Why pass off other people's dances as "Armenian", in which, without understanding the essence of stolen goods, obvious "lapses" are allowed? As a result, it turns out that in the body dances stolen by Armenians by the Armenians, the dancers' movements have nothing to do with the dignified dance of warriors who are ready to join the battle at any moment.