Margarita Simonyan "puts in place" the Pashinyan regime: "Russia has every moral right to spit on you and grind" 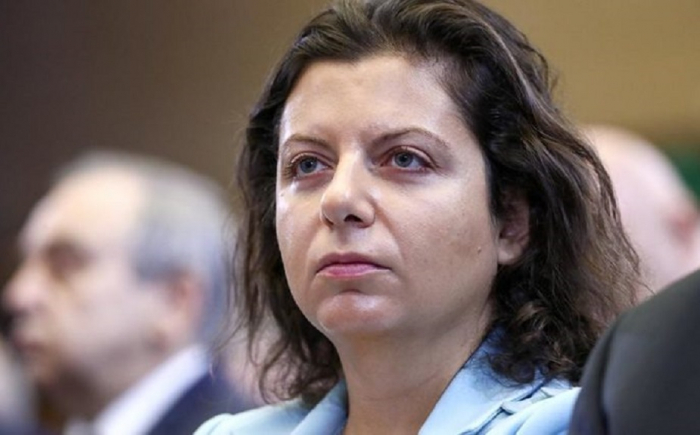 The further, the more it becomes obvious that the plan of the Armenian lobby to involve Russia in the war for Armenian interests at this stage is not successful. The aggressors lost the most precious thing - time.

Although everything was carefully prepared and coordinated. The Russian army deployed its exercises in the South of the Russian Federation and the occupied territories of Georgia just at the time of the beginning of the armed provocation of Armenia on the border with Azerbaijan in the Tovuz region.

The scheme was simple: Armenia arranges an armed provocation - receives an answer - yells that it was "attacked" - the Russian army, as an ally in the CSTO, rushes to help, including through the territory of Georgia.

All Armenian information resources were mobilized, which, starting from July 12, shouted that Russia "must urgently come to the aid of a strategic ally." At the same time, the wildest provocations were invented to justify “breaking through a corridor through Georgia - that is, the aggression of the Russian Federation from occupied Abkhazia and the Tskhinvali region across the Georgian territory "to help Armenia." Up to fantasies about the fact that Georgia collects bats in the occupied territory in order to then make biological weapons in the Lugar laboratory near Tbilisi.

However, day after day passed, the Armenian army began to "run out of steam" and suffer defeat, and Russia was in no hurry to launch its military machine "to help Armenia". Most importantly, the "moment of surprise" was lost. Fortunately, not everything in the Kremlin is decided yet by the Armenian nationalists. President Vladimir Putin held telephone conversations with Turkish President Recep Tayyip Erdogan and it became obvious that there would be no "go-ahead" of the Supreme Commander-in-Chief for the Russian army. The Armenian provocateurs got a “false start”.

What started here! Russophobia in Armenia, already off the scale, has reached an unimaginable limit. Russia was accused of all mortal sins, of the "Armenian genocide", of "working for the panturkists", etc. Moreover, they began to accuse "betrayal" of Russian Armenians, including high-ranking officials.

This turn of events did not like the Russian Armenian lobby at all. Judge for yourself, there are Armenians in key positions in the Russian Federation. The prime minister, the head of the Foreign Ministry, the main propagandist ... They do everything to organize provocative combinations in the Armenian nationalist interests. And it turns out if something goes wrong for objective reasons, then they themselves are to blame...

Therefore, the main propagandist of the Kremlin, Margarita Simonyan, was forced to publicly “put in place” the Russophobic regime of Pashinyan, so that he still knew the measure of Russophobia. After all, Armenian nationalists are going to continue to “milk” Russia and use “Russian bayonets” for their own purposes. They absolutely do not need the Russians to open their eyes and understand how ungrateful and vicious are the Armenian nationalists towards their benefactors, Russians.

“I appeal to the Armenian authorities. It is to the authorities, and not to the people, of which I am a part.

I am appealing only because your Internet troops have been polluting my social networks with demands (in a boorish and aggressive form) "to express my position."

Look at yourself from the side. See what you do. How do you behave? What kind of Armenians are you?

Armenians are honest, noble, and grateful people. I've always been like that. And you behave like (FORBIDDEN BY ROSKOMNADZOR).

In response to the many years of good and protection that you received from Russia, you did not recognize Crimea. Because this is an internal affair of Armenia.

Exclusively out of political revenge, you put Robert Kocharyan in prison - Russia's constant ally. They planted them on purpose, demonstratively, spitting right in the face of their "Russian friends". Because this is an internal affair of Armenia.

You have flooded the country with anti-Russian NGOs that are teaching young people on your territory how to overthrow the government in Russia. You have become a springboard for anti-Russian forces in the Caucasus. Because this is an internal affair of Armenia.

You kicked out Russian Armenian businessmen. You don’t want anything to do with Russia. Because this is an internal affair of Armenia.

Your media and social networks hourly slop Russia, Putin, everyone who supports Putin, especially Russian Armenians (for example, me). You have divided the unfortunate, already disappearing Armenian people into enemies - Russian Armenians - and "real" ones - those who support your momentary power. Because this is an internal affair of Armenia.

And now, when there is a war on your border when the very existence of your regime is under threat when the Armenians of the whole world are already seeing the revived ghosts of the janissaries with crooked knives with which they cut our ancestors, you remembered that Russia must save you again.

Is this not the internal affair of Armenia?

After all the evil and choking contempt that you have shown towards Russia in recent years, your information troops and you yourself consider yourself entitled to wait for help?

In fact, after all, that you have done, Russia has every moral right to spit on you and grind it.

But she won’t do that. I'm sure. It will help this time too.

Because Russia is like that. Generous and noble, my homeland, beloved.

And you are just a handful of screaming politicians who betrayed the interests of the great Armenian people for a moment of power and petty personal revenge.

Read Narekatsi at night. Maybe you will wake up the remnants of the famous Armenian conscientiousness and the ability to appreciate good.

If you do not have Narekatsi - so I will convey. I’m lying on the nightstand.
And about the war, I will tell both sides only one thing: stop! There is nothing worse than war. I know this on my own skin. Just stop before it's too late. "

What can be said about the appeal of Margarita Simonyan? If we ignore Armenian nationalism and “Armenian greatness”, there is a lot of common sense in it. And Margarita Simonyan is absolutely right when addressing the Armenian authorities “after everything that you have done, Russia has every moral right to spit on you and grind you down”.

However, if Margarita Simonyan wants to "calm down" Armenian Russophobia and drive it "into the bounds of decency" in this way, then it is unlikely that this will succeed.

Armenian nationalism has degraded into a completely insane state. Psychiatrists know that sometimes unfortunate mental patients, obsessed with megalomania, degrade to the point that they begin to spit, bite those who feed them and take care of them, and in an extreme degree of degradation throw feces.

Actually, this is a terrible sight ... But it is to such a state that Armenian nationalism has degraded today. And the main danger is that these deranged people are not isolated in mental hospitals, but want to kindle a world war and involve Russia in it.

The Russians should think in time whether it is worth making their fate and the fate of mankind depends on such really obsessed with nationalist mania and sick people.