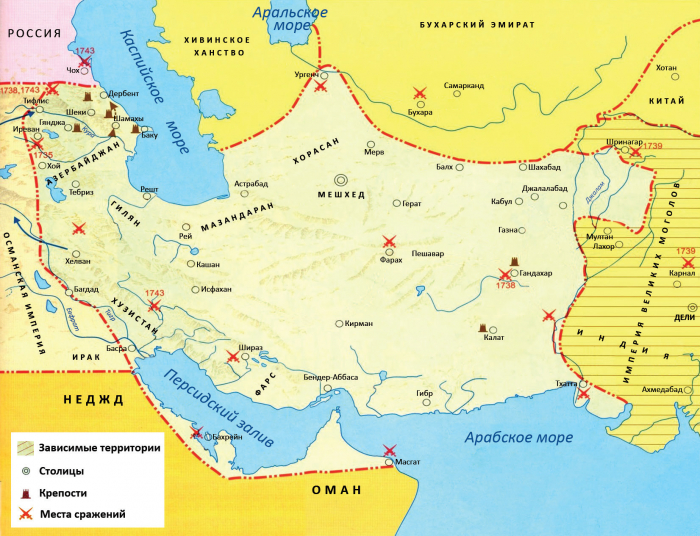 While there are protests in Iran and the world community wonders whether the current leadership will be able to retain power, potential contenders for the role are "sharing the skin of the unkilled bear". The other day Reza Hazli Afshar, a descendant of Nadir Shah Afshar (Shah of Persia 1736-1747, founder of the Afshar dynasty), introduced himself as the heir to the future throne of Iran and even declared his son, Prince Ariya, Crown Prince. The throne was also claimed by one of the sons of Ahmed Shah Qajar (the last Shah of Iran of the Qajar dynasty), Babek Mirza Qajar.

The Pahlavi family also never concealed the goal of overthrowing the mullah regime and coming to power in Iran. For example, Reza Pahlavi, the eldest son of Mohammad Reza Pahlavi, the last Shah of Iran of the Pahlavi dynasty, clearly sees himself as heir to the throne. Thus, to date, three families - the Afshars, the Qajars and the Pahlavis - have declared themselves heirs to the future throne of Iran.

According to many experts, the chances of restoring the monarchy in Iran are slim, but it is very symbolic that three dynastic families, which once ruled the country, have claimed the throne at once. Even if this or that dynasty will not ultimately come to power, the "preferences" for its representatives in Iranian society speak volumes. Namely, how its citizens see Iran's future.

The fact is that the rule of each dynasty was radically different both in its aims and objectives and in the "ethnic component" of the top rulers.

The Qajars and Afshars were Turks by birth and not only did not diminish their Turkic identity but were proud of it. Today there is a demand for Turkic identity revival in many provinces of the Islamic Republic of Iran. According to some estimates, Turks make up to a half of the population of the Islamic Republic of Iran today, about 40% are ethnic Azerbaijanis.

Meanwhile, the last ruling Pahlavi dynasty, which came to power in 1925 with the help of the British (and was therefore initially manipulated from outside) relied on Persian nationalism and the suppression of the national identity of Turkic peoples. This is largely why the Turks of Iran, including the Azerbaijanis, supported the Islamic Revolution and the Ayatollahs as a "lesser evil" than during the Shah, when the Turks were openly discriminated against.

Alas, the new government did not move far from the old policy of Persian nationalism imposed by Pahlavi. It is being imposed by other means, under the cover of religion.

Should the current protests in Iran lead to a change of power, the question of the rights and identity of Turkic peoples, especially Azerbaijanis, will again become relevant. And here the supporters of Pahlavi restoration are "losing points" because a significant part of the Azerbaijani population is likely to be against such restoration and betting on Persian nationalism. Likewise, any government that fails to heed the aspirations of the Turkic peoples of the present Islamic Republic of Iran would have problems keeping the country united.

However, there is also a fundamental difference between the Qajars and the Afshars, despite the Turkic (Azerbaijan) origin of both dynasties.

The Qajars were a dynasty during the decline of the formerly powerful Safavid Empire (the descendants of this Turkic dynasty are also living now, but they have not laid any claim to the throne yet). It is not by accident that Aga Mohammad khan, the first Shah of Kajar dynasty, undertook one of his last campaigns in eastern Georgia (Kartli and Kakheti) to make King Irakli II, the former vassal of Safavids, recognize the rights of his new dynasty - the Kajars.

And even despite victory of Agha Mohammad Khan in Krtsanisi battle, that campaign must be considered a failure - ruler of eastern Georgia did not recognize rights of Agha Mohammad Khan on "pan-Iranian" throne. Kurultay in Mugan steppe (where Aga Mohammed Khan was declared shah in 1796) was held without plenipotentiary representatives of Georgia and some khanates of Northern Azerbaijan, as a result of which "imperial legitimacy" of Qajar dynasty was initially questioned. Subsequently, the affairs of the new dynasty went sadly. In 1797 Agha-Muhammad Shah himself was assassinated in Shusha (where he had organised a campaign to subjugate the Khanate of Karabakh).

In the early 19th century, with the expansion of the Russian Empire, the Qajar Empire lost much of northern Azerbaijan and, in 1827, the khanate of Iravan. The subsequent, almost century-long Qajar rule was a period of decline and dependence on other powers, to the point that in the early 20th century Persia (as the country was then called) was divided into a Russian and a British zone of influence, and after the Russian Revolution, it essentially became an entire zone of British influence.

It is obvious that the Qajars and their era are associated with decline and defeats rather than victories among the people of Iran, which is not the case with the Afshars.

Nadirshah Afshar went down in history as the greatest ruler of Iran, who created a "world-class" empire and was treacherously murdered at the peak of his expansion. Moreover, Nadirshah was the only Shah who tried to reconcile Shia and Sunni in his power. Thereby overcoming the "pariah" position in the Muslim world which had been a problem for centuries for the Safavid Shiite power.

The power of Nadirshah extended not only to modern Iran, but also to most of the Caucasus, Central Asia, Iraq, Afghanistan and part of northern India. That is, the Afshar dynasty is more in line with the "imperial" aspirations of the "new Iran", if they will be at the end of the change of power.

Of course, other geopolitical players may have quite different vision of the future of the Islamic Republic of Iran, and they are unlikely to be happy with the appearance of "new Nadir Shah" under the banner of "revival of greatness of Afshar". However, based on the new geopolitical realities, the empire that Nadir Shah built should be taken a closer look. After all, it ended up controlling key land routes in Eurasia.

Modern Iran is also trying to "fit" into the "new trans-Eurasian routes. But its ideological insularity and, in fact, unfriendly attitude to its Turkic neighbours are now very much hindering it.

Based on the new realities, a transformation of the Islamic Republic of Iran could be promising, in which it becomes 'open' to its neighbours without losing its sovereignty and without imposing 'vassal dependence' on others. In this case, the issue of preserving the identity of its constituent peoples is removed, but there are prerequisites for spreading economic and cultural influence outside Iran. But this time without military expansion.

If Tehran "turns its face" to the Turkic peoples and Turkic countries surrounding it and proposes a "new community" based on peaceful interaction and cultural co-existence, this policy may have far-reaching prospects.