Could the Russian Federation launch an intervention in Karabakh using PMCs to "save" 40,000 Karabakh Armenians? 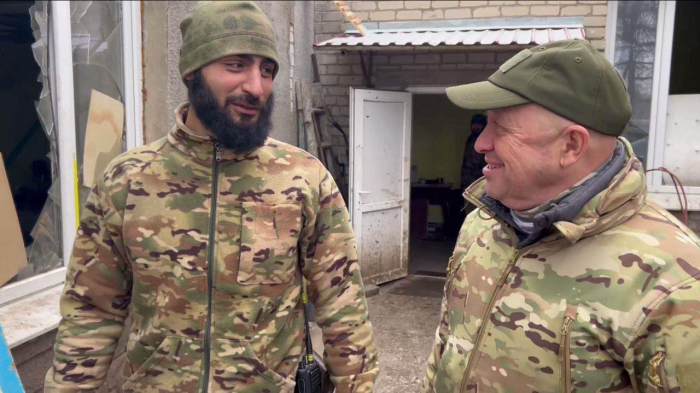 According to the Ukrainian parliament's official TV channel: Using as a pretext the "need to protect" the approximately 40,000 Armenians remaining in Karabakh in Azerbaijan, Russia may launch an intervention in Karabakh: "Russia is frightened by the expansion of the conflict. Unfortunately, there is now an increasing risk that Russia could undertake a hybrid intervention in Karabakh. There has been quite alarming news coming out of there lately. They sound appeals to offer Russian passports to residents of Armenian origin living in Karabakh, who stayed there; they say that there are very many of them, 120 thousand, although international organizations say about 40 thousand. There are statements that there is a "humanitarian catastrophe" because the eco-activists are blocking the Lachin corridor. Again, international organizations claim the humanitarian cargoes go through freely and this is an environmental protest. We have seen what happens in Ukraine after such a situation has been inflamed. When Putin and Russian troops declare that it is urgent to save the inhabitants of Crimea, green men appear there and such creeping aggression is carried out..." - a Ukrainian source reports.

At first glance, Russia, "bogged down" in the war in Ukraine, does not seem to care about Karabakh and does not even have the strength to hold down a "Ukrainian front", let alone operations in the South Caucasus. However, this is only at first glance. Recent historical experience shows that when it comes to Armenian interests in Russia, those who support the Armenian lobby sometimes sacrifice even their own interests. Moreover, for the sake of the "ancient people" they take part in military adventures, even if this participation due to "distraction of forces" brings them defeat in the end.

The most telling episode is participation of Russian militaries and mercenaries in the war in Abkhazia in 1992-1993. It is no secret that the storming of Sukhumi and massive ethnic cleansing and expulsion of Georgian population from Abkhazia in September-October 1993 came at the time of the confrontation in Moscow between Boris Yeltsin and the majority of the Russian Supreme Soviet led by Rutski-Khasbulatov-Baburin. This confrontation eventually led to a military clash and the defeat of Rutskoi, the Supreme Soviet.

However, few know that it was at the initiative of the fierce Georgianophobe Alexander Rutskoi (then "vice-president of the Russian Federation"), at the instigation of his Armenian "friends", that his supporters from among the Russian military fought for the separatists. Just when their forces in Moscow could have turned the situation in favour of the Rutskoi-Khasbulatov-Baburin rebels, who relied on the so-called "White House" - the building of the Supreme Soviet of Russia.

Eventually, "The White House" was taken by storm on October 4, 1993, a week after the fall of Sukhumi. At the same time, the fighting for the White House on October 3-4, 1993 was fierce. Its defenders claimed that they were "just a little bit" short of strength to repel the assault and turn the situation in their favour.

However, those who could have defended the Moscow "White House" and Rutskoi simply did not have time to "redeploy" from Abkhazia to Moscow. As a result, almost most of the "combat-ready" supporters of Rutskoi and the Supreme Soviet as "volunteers" were engaged at the time in war with Georgia, looting and ethnic cleansing in Abkhazia. Together with the Baghramyan battalion and other formations. Baghramyan and other groups of Armenian fighters, who were the main winners and beneficiaries of the separatist war. In fact, we got "maritime Armenia" in place of Georgian Abkhazia, where Armenians became the largest ethnic group.

History can repeat itself, but to a much more catastrophic extent for Russia. Even if Russia continues to suffer defeats in Ukraine, judging by information coming in (including through Ukrainian intelligence) plans for aggression in Karabakh in the interests of Armenian nationalists and revanchists are already being worked out. Moreover, an invasion is possible not directly, using the Russian army, but through the PMCs "tried and tested in the war in Ukraine".

This scenario has been known since the Abkhazian war in 1992-1993 when "volunteers" who were not formally associated with the Russian Federation fought against Georgia. In relation to Karabakh, if Russia fails to organise an open action on the side of the separatists (the distribution of Russian passports may precede it), the same scenario appears to be being worked out. Then, formally, Russia will continue to "peace keepers", and PMCs, which formally have "nothing to do" with Russia, will fight for the interests of the separatists.

Cadres of PMCs for operations in Karabakh are already being prepared. So, it was recently reported that during the awarding of medals "For the capture of Soledar" by Yevgeny Prigozhin, owner of the Wagner PMCs, the commander of the assault group Aik Gasparyan, call sign "Abrek", was also awarded. Russian President Vladimir Putin had also previously awarded him the Medal for Valour. There is no doubt that these "Armenian cadres," along with criminals currently gaining "combat experience" in Ukraine in the ranks of the Wagner PMC, can be transferred to Karabakh to fight for the separatists at any time.